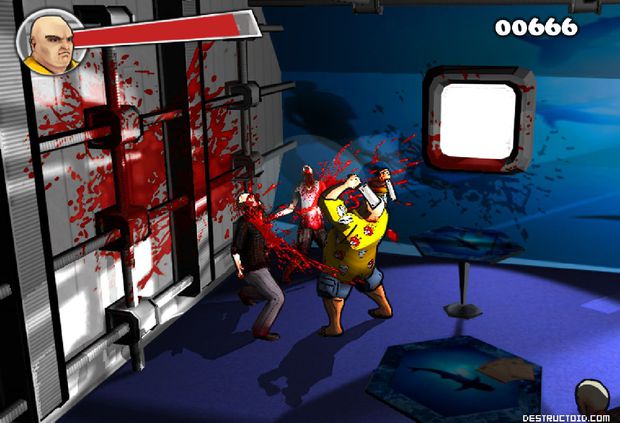 Revealed awhile back, Bloober Team is finally ready to talk more about Last Flight, an upcoming downloadable title, designed exclusively for the Wii and WiiWare.

What happens when Anna, a mysterious and sexy Romanian woman tries to transport a body for burial on a flight, but it turns out that body is a vampire? Larry Adelman, a culinary critic on the same flight, steps up to save the day with knives.

The “wait, what the f*ck?” plot of Last Flight should appeal to fans of camp horror, while the gameplay — inspired by beat ’em and hack’em ups like Sega’s Golden Axe — should turn some heads as well. But according to Bloober Team, writing it off as a simple brawler doesn’t do the game justice – it’s more of an “action-adventure.”

In the game, Larry can wield two weapons at once. Players control attacks by either swinging the Wii Remote or the Nunchuk, strung together for combos and fatality-like finishing blows. Bloober Team says that while the game may appear simple on the surface (and that’s the point), there’s enough variety in attacks and finishing blows that “in the longer run, [it’s] deep enough to explore.”

Last Flight will be broken up into four downloadable episodes, the idea to make the game “as accessible and affordable as possible.” Another reason for splitting the game up into four parts?

“As you can see on the shots, Last Flight doesn’t look like your typical WiiWare game,” Bloober Team says. “I would say that it looks as good, if not better, as our boxed competition. To achieve such a level of detail on WiiWare, we had to divide the game into episodes.”

“We find Wii Remote really intriguing and innovative,” the team says, “and we wanted to use it to create a unique experience. We would also love to see more games for the core audience on that console.”

That’s a view shared by a lot of developers we spoke with, and isn’t worried about the perception that “Wii users don’t buy mature content.”

“What we believe, though, is that Wii appreciate good games and we’re going to deliver them one.”