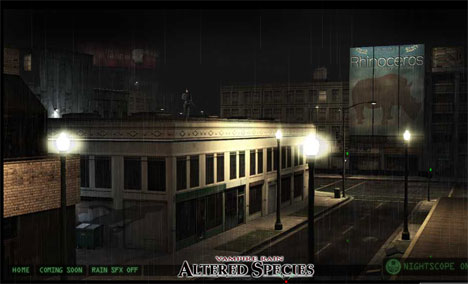 Following in the trend of highly interactive game sites, Ignition Entertainment launched the official site for Vampire Rain: Altered Species today, a game that places you in the role of an elite agent for the American Information Bureau out to kill seven Nightwalkers who have infiltrated the area. Completing this mission will open up a special section of the site, offering hints and tips about the game.

The site also features new trailers, which will give gamers a peek into what they will be getting into this August when the game comes out. The trailers will be released as a series, so keeping an eye on the site may reward you in the long run.

What do you think about the interactivity of websites for upcoming games? I know the only one I ever played with for a long time was for a Myst sequel many years ago. Of course, they are great time wasters, but do you actually enjoy them, or do you feel it’s just a bunch of crap you have to navigate through to find out information that would be better be plainly stated?

Full press release after the jump. Bring your garlic.

Your Mission Begins at AlteredSpecies.com

June 5, 2008 – Marina del Rey, CA – Ignition Entertainment, a UTV Enterprise and worldwide publisher and developer of videogames, announced today the launch of the official game site and first teaser trailer in a series of videos for the upcoming stealth-horror title Vampire Rain: Altered Species. The fully interactive website can be found by pointing your browser to www.alteredspecies.com.

Visitors to the site will assume the role of an elite operative of the American Information Bureau (AIB) whose duty it is to seek out and eliminate (with a single head shot) the 7 Nightwalkers that have infiltrated the site. By eradicating the Nightwalker infection from the site visitors will be granted access to a special, highly classified, “Hints n Tips” section of the site. In addition to unveiling the latest screenshots, media, character profiles and downloads, AlteredSpecies.com will also house the latest in a series of terrifying trailers from the talented and twisted minds of Red 40 Productions. This series of trailers will mesh gripping, live-action scenarios with pulse-pounding gameplay to paint a chaotic and blood-soaked image of the game.

“We are thrilled by the level of interactivity delivered by AlteredSpecies.com,” said Ajay Chadha, President of Ignition Entertainment. “That, along with our engrossing series of trailers, shows only the beginning of our commitment to aggressively market Vampire Rain: Altered Species through out of the box thinking.”

In addition to the trailers and short episodic videos, Ignition Entertainment will also release a developer interview with the videogame’s creators.

The Vampire Rain: Altered Species video series is set to start releasing Wednesday, June 4, 2008 and can be viewed by visiting www.alteredspecies.com.