Valve has announced a massive update for their mind bogglingly popular MOBA, Dota 2. Dota 2 Reborn will be a top-to-bottom overhaul, reworking and tweaking just about every aspect of the game. Chief among these changes is a brand new engine, presumably the move to the long teased Source 2 (although knowing Valve, nothing is certain).

Valve is unveiling the changes Dota 2 Reborn will be rolling out in stages. This first update focuses on the brand new UI, which looks smoother and easier to navigate than the current jumble of slow loading menus and windows. Easier is the watch word, with Valve trying to make everything from customizing your hero, to chatting with friends, to spectating a game more intuitive and less of a hassle. 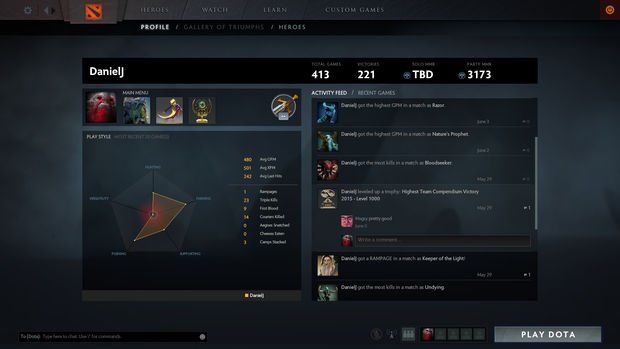 Valve is also adding some new learning tutorials in the form of guided bot matches to help ease new players into the game. Instead of the traditional determination testing crucible of 14 year olds swearing at you in Russian for stepping into the wrong lane, new players will be gently introduced to the game by some (presumably less profane) AI friends in a series of vaguely scripted matches. Considering the reputation Dota has built for itself as an intimidatingly complex and unforgiving game, I’d say this sort of learning tool is long overdue.

Next week Valve will be unveiling their plans for Custom Games of Dota, which I’m sure will send hardcore players into a tizzy. Make sure to join me on my 4x Gold and XP server with ultis set to near instant-cooldown and never-ending creep spawns, the way (I’m sure) the game was meant to be played (this might be a good time to point out the fact that I’m a Dota scrub).