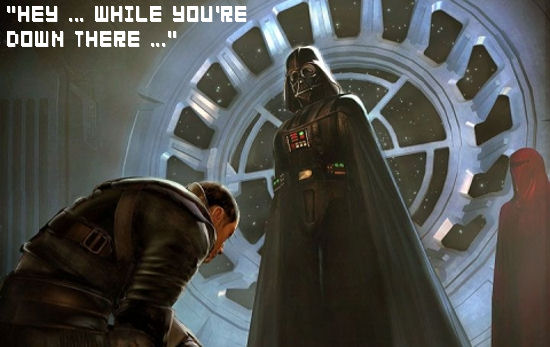 Star Wars: Force Unleashed is shaping up to be a fantastic action title with its impressive physics and brooding story revolving around Darth Vader’s secret apprentice. Today we’ve just had a new drop of news that’s sure to make some fans even more gooey inside — not only will you be playing the apprentice, but the Dark Lord of the Sith himself.

The first level takes place on the Wookiee home planet of Kashyyyk, and allows you to assume the role of Lord Vader as he hunts for Jedi. I hate Wookies, so the chance to throw them around as Vader himself has already earned this game a gold star on principle alone. While it sounds like Vader is only in the first level to demonstrate all the Force powers you’ll eventually earn as the apprentice, it’s still an announcement made of Dark Win.

Even as a passing fan of Star Wars (more interested in the expanded universe than the passable movies), I am excited for this. The hype is strong with this one, but it still looks like Force Unleashed has everything to become one of 2008’s hottest games. You get to Force Blast Wookiees, for crying out loud! That’s one sale guaranteed right there.