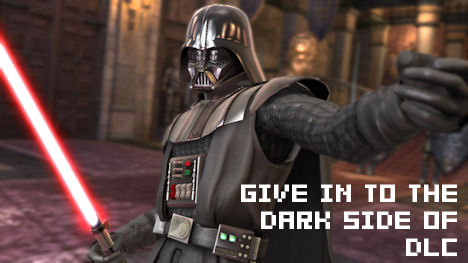 Many predicted this, and it’s no shocker to find that Scamco Bandai will be introducing Yoda and Darth Vader as downloadable characters for Soul Calibur IV. Yoda and Vader were exclusive to the Xbox 360 and PS3 respectively, but with Namco being one of the worst DLC nickel-and-dimers out there, it was only a matter of time before they were made available to all … for a price.

This Thursday, you will be able to buy Vader for 400 MS Points on Xbox Live, or Yoda for $4.99 over the PlayStation Network. Yep, five bucks for a downloadable character, which is likely already on the disc. Don’t you just love it when a publisher uses DLC the right way?

As far as I’m concerned, this is pretty grotesque. Namco Bandai has become almost self-satirical when it comes to downloadable content and I would like to think they won’t be supported … except they will, and that’s sad.