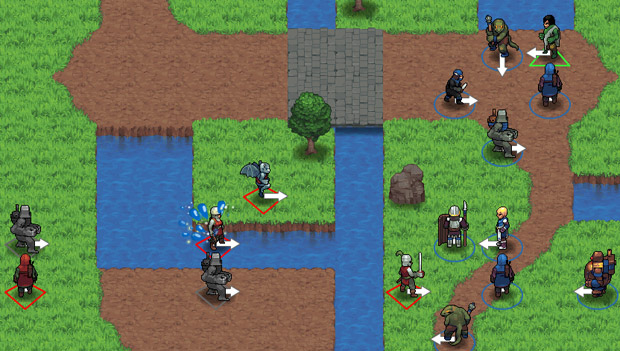 Telepath Tactics might have been made just for me

I always told myself that if I knew how to make videogames, I’d make a strategy RPG in the vein of Fire Emblem or Shining Force. I grew up playing games like those and always love to see more like them. Well, it looks like I don’t have to worry about that anymore, since Telepath Tactics is just what I’ve always wanted to create myself.

It’s got classic turn based gameplay with over 20 classes, plus terrain altering, local multiplayer, and a ton of possibilities with user-generated content. Seriously, the user content isn’t limited to new maps, but entire campaigns complete with NPC dialogue and scripted sequences. There’s a built-in campaign as well, so even if the community doesn’t step up, the game will still be a complete package.

I got to sit down with Craig Stern, the creator of Telepath Tactics, and chat about his game. He told me that the idea came to him when he wanted to play Fire Emblem: Path of Radiance locally with a friend. That game does not have any support for multiplayer, so he made his own game instead. I’ve got to admire that dedication. He launched a Kickstarter in late 2012 with a focus on the local multiplayer aspect, since that was Mr. Stern’s original inspiration.

The Kickstarter failed, but he learned a very valuable lesson: the people want a full single-player campaign in their SRPGs. So he recently launched it again, but with the promise of a single-player campaign on top of everything else. This time it was funded, within a week even, and is currently looking to reach as many stretch goals as possible.

The game itself mixes the traditional SRPG elements that the fans know and love with some pretty interesting and fresh mechanics to keep it from feeling all too similar. Throwing and pushing enemies is possible, which makes a character’s proximity to cliffs, water, and lava way more important.

It is also possible for certain classes to build bridge tiles, connecting two previously separated areas. It’s a simple addition with complex implications. If the enemy can bridge two areas and get their fighters across in a single turn, you had better be ready.

I didn’t get to play with any of the editing tools, but it looks like the map-editing tool will be easy to use and understand. Creating a new NPC or scripts seems a bit more complex, but you can always be like me and just appreciate the content that other, way more skilled people create. As if it wasn’t wonderful enough that there is going to be an intense and classic SRPG on the PC, it’s also playing to the platform’s strength by including mod support!

The demo was quite long, and I had to actually pull myself away from one of the two stations because I wanted more people to be able to get their hands on it. Telepath Tactics won my heart pretty quickly, and it should do the same to any other fan of Fire Emblem, Disgaea, or Shining Force.