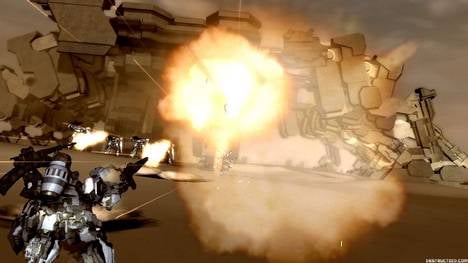 I’m not a big fan of the series, but as far as I’ve been able to tell, the Armored Core series has always been about using big mechs to blow things up. The above screenshot for Ubisoft’s just-announced Armored Core For Answer for the Xbox 360 and PlayStation 3 seems to confirm my suspicions.

The From Software developed title with the curious name will be introducing gigantic boss battles for the first time in the series, allowing players to pilot their mechs into gigantic battle stations to destroy them from the inside out. From Answer will also feature more than 30 cooperative mission which can be played online, as well as an eight-player multiplayer game with more than 80 battlefields.

I’ve tried to play the games a few times, and always walked away scratching my head by what I felt were complicated controls; From Answer is said to feature two control schemes, one re-worked for beginners. I’m a bit slow, I suppose, and when the game ships this September, maybe it’ll be the first Armored Core game I can wrap my tiny brain around.

Press release and more game details (including some story about a rebel resistance and a polluted planet) after the jump.

About Armored Core for Answer
In the distant future, massive urban development and pollution have critically damaged the planet. There is widespread fear that the end of the world is approaching. The League corporations, a military superpower, control the planet’s infrastructure and have forced most of the world’s population to live in huge aerial communities, called Cradles, to avoid the contamination. The ORCA, a rebel resistance still residing on the surface of the polluted planet, have amassed a formidable arsenal and are mobilizing to attack The League’s bases to put an end to their iron grip on the planet. As a mercenary armed with cutting-edge military robot technology, choose your side and defeat the other factions by harnessing the power of the deadliest and most gigantic weapons ever created by mankind. Armored Core for Answer is rated “T” for Teen with Mild Language, Violence.