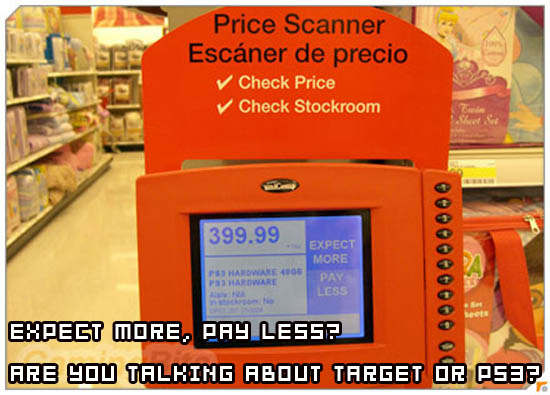 You know that 40GB PS3 that we all love/hate? Yeah, the one that the whole world has except for the Americans. Well, now some information leaked from US retailer Target shows an October 28th “in-stock date” for the $400 system.

Engadget has linked to some pictures from Target’s internal systems, showing that the 40GB PS3 system is indeed coming to America. One picture shows a bit of text that says:

This could have something to do with the rumored Spider-Man 3 Blu-ray disc pack-in that we’ve heard rumors about. Yeah, I know — big deal. But, it’s better than our last pack-in! If this is true, it would put one of Destructoid’s best running jokes to bed. What a shame.

As you may already know, the system will come with only two USB 2.0 ports, HDMI and Wi-fi, no memory card ports, and no PS2 backwards compatibility, but should serve the American electronics-addicted holiday consumer well with its new lower price point.

Hit the jump for more pictures.