Robot Loves Kitty’s ambitious Upsilon Circuit is what I would consider the quintessential slow-burn, developing story in independent games today. In keeping with the premise of the TV game show-inspired title, the New England-based studio has had me regularly tuning in as a games writer over the last seven months to follow up on progress it’s made since I last checked in.

My next opportunity to learn more about the game came at this year’s PAX East in Boston. As the doors opened early to admit the gaming press, I hurried through the expo’s labyrinthine aisles, scanning the mostly empty booths along the way on my hunt for the husband-and-wife development team’s elaborate demonstration setup.

Once there, I met up with a concerned-looking Calvin Goble, programmer and studio co-founder, as he was making last-minute adjustments to the impressive multi-monitor, two-contestant, two-audience-member demonstration unit the group had constructed for the expo, which is shown briefly in the video below.

If you’re just hearing about it now, Upsilon Circuit is an extraordinary gaming experience, and as far as I know, the only one like it in existence. It combines elements of audience-participation TV game shows with contemporary third-person action role-playing game combat and mechanics. Not only that, but it will also feature an unconventional asymmetrical element via the interaction of the game’s live audience members.

When I last wrote to Alix Stolzer, co-founder and designer for the studio, she mentioned that the plan for the game will be to schedule it to “air” for a few hours each day, much like a TV show, with Ronny Raygon — the Max Headroom-like figure seen on-screen in the video — serving as the game’s live host.

The game’s structure isn’t based around set matches or rounds in a daily or weekly sense; rather, a round could possibly take months for the surviving players to complete. Stolzer elaborates on this by saying that “a round can be won when a team successfully manages to collect all of the Dream Fragments, at which point, the next round will begin.” 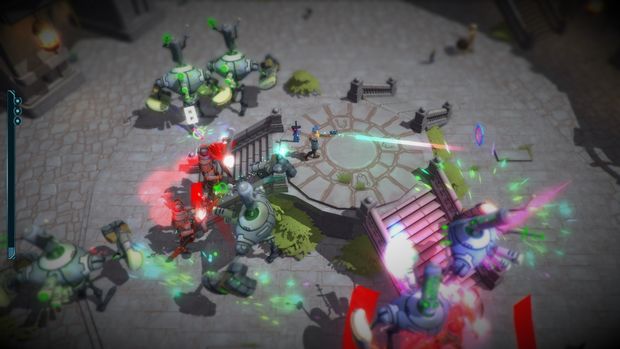 Being a free-to-play game, everyone will be invited to tune in to watch or participate, but only eight will be chosen to compete in the game at one time. The only requirement to take part is that you create an account and presumably download the free client software.

After creating an account on the game’s server, audience members, which could number in the thousands, will then be able to view the game in progress through the dedicated client program, fitted out with a graphical user interface designed to allow for interaction with the Upsilon Circuit‘s two four-person teams of contestants.

For the purposes of show-floor demonstration, the team had two tablets available running a functional prototype of the audience interaction interface, which is shown below. 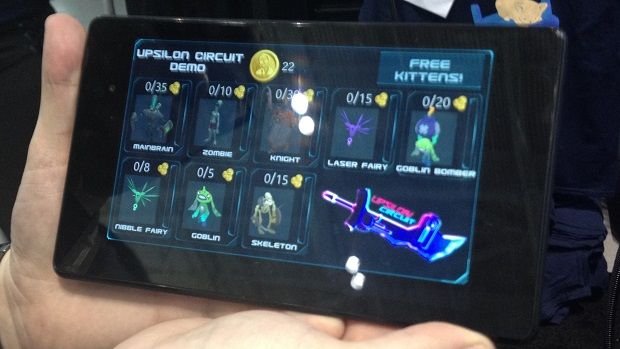 As you can see in the image, there are two rows of icons to choose from, with each icon displaying a different enemy type that an audience member can send into the game.

Each creature (or creatures, as some choices send in a mob), has a different cost associated with it that must be paid beforehand. The Ronny Raygon-themed coins used to purchase them replenished gradually over time ensuring that overzealous audience members couldn’t spam too many creatures at once during the demonstration.

The only choices available for us to experiment with were the game’s various monsters, however, Stolzer assured me that helpful items will be available in future versions (health potions, etc.), as well as noted that item or monster spawning will be set so that audience members can pick specific contestants as the spawn-point for the item or creature they want to send into the game. 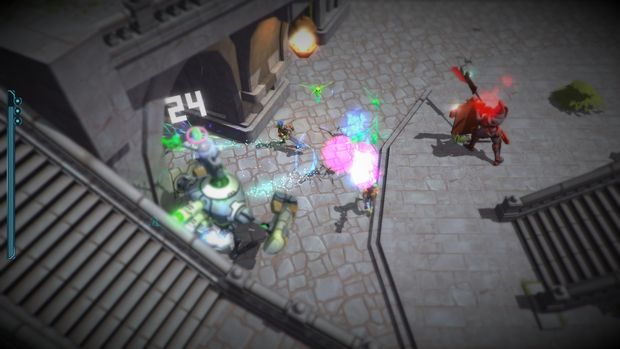 We’ve mentioned it before, but one of the things that really stands out about Upsilon Circuit is that it features what the studio refers to as “perma-permadeath.” That extra “perma” means exactly what you think: once you die or forfeit, that’s it; you’ll never have the opportunity to be a contestant again.

Even roguelike games allow you to start over, but what Robot Loves Kitty is striving for here is something entirely new. The underlying goal seems to be to impart on the player a very real sense of permanence and consequence associated with their actions.

When you die, you’ll be returned to the audience and rewarded in some way based on your performance during the game. However, if you do manage to survive until that day’s airing concludes you’ll earn another day to play and can continue on indefinitely until you either miss your appointment to play, die, or the game’s overarching, single storyline has run its course. 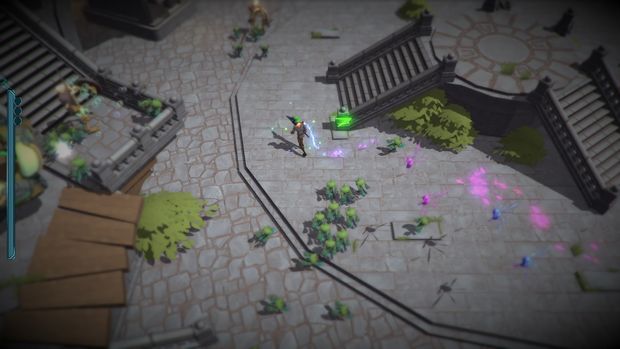 Upsilon Circuit is undoubtedly a fascinating experiment and I can’t help but think it may be blazing trails that others are destined to follow. There are parallels in modern television shows where we, the audience, can affect the outcome of the competition we’re watching, but they lack the immediacy and intimacy Upsilon Circuit has the potential to bring when it eventually goes live.

Instead of waiting for votes to be counted and winning contestants to be allowed through to participate in the next day’s competitions, changes to the game will happen in real time. Contestants will die in front of us — quite possibly by your hand, or by your actions as an audience member — and new players will take their place, fighting for their one and only shot at glory.