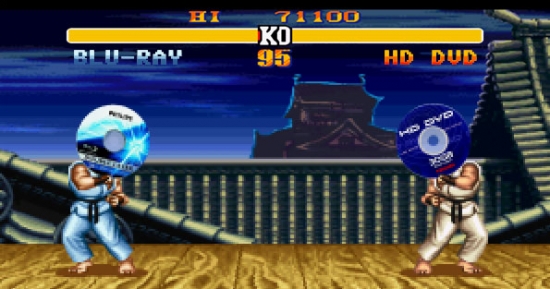 UPDATE: NextGen reports that Paramount is denying any plans to drop HD DVD exclusivity.  A victor has yet to take the spoils!

It seems as though the funeral march for HD DVD is picking up speed, or if nothing else, a clear winner in the format wars may soon be announced. Paramount, following in the foot steps of Warner Bros., has dropped HD DVD in favor of Blu Ray.

But wait, didn’t Paramount have some kind of exclusivity contract set up with the HD DVD people? They sure did, but apparently there is a clause in said contract allowing them to bail in the event that Warner Bros. went Blu Ray. With Paramount having jumped ship only Universal Studios and Dreamworks remain exclusive to the HD DVD format, and there’s a bit of speculation that Dreamworks will shortly follow Paramount.

I’ve waited, postponed, and put off the purchase of a PS3, but much like my inimitable compatriot, I feel like it may be time to grin and bear the cost. If nothing else I’m simply glad I didn’t drop my hard earned dollars on an external HD DVD drive.

[via FT] Thanks, Michelle!