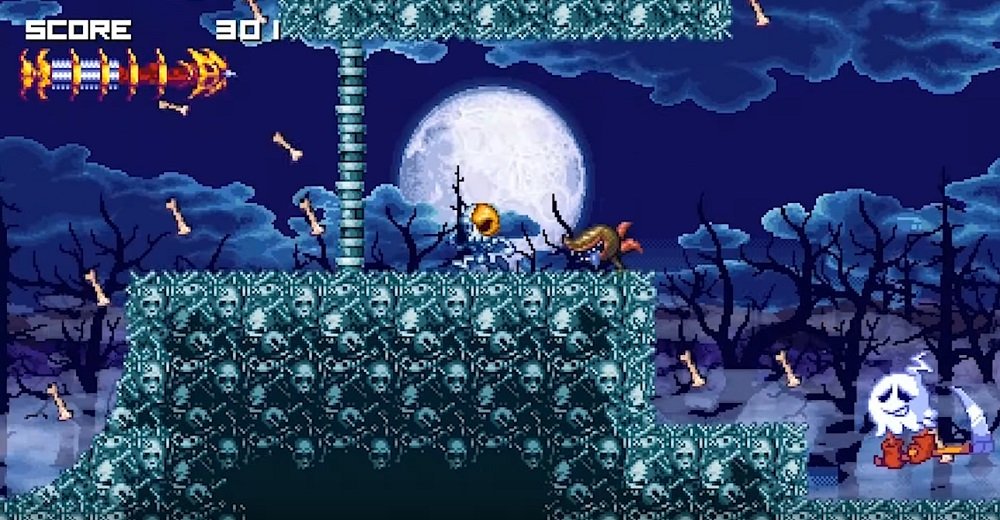 [Update: Headcannon developer Simon Thomley has announced that the Vertebreaker crowdfunding campaign has been cancelled. After the project reached only 5% funding after its first week, the team decided to pull the plug on the Kickstarter. Thomley goes into detail about what he calls a “spectacular failure” in an emotional YouTube video, before individually thanking every single backer by name.

The team are expected to reorganise and relaunch the campaign at a later date. Vertebreaker looked like a charming and authentic retro adventure. Here’s hoping that the team will see more success in the future, whether with this particular release or another project.]

Headcannon, the co-developer behind the excellent Sonic Mania, has begun crowdfunding on Kickstarter for its next project, a ghoulish 16-bit-style title called Vertebreaker.

Vertebreaker is a classic side-scrolling platformer similar to the many that swamped the Sega Mega Drive and Commodore Amiga in the early ’90s. It concerns the adventures of skeletal hero, Richard Boehner, who has returned from the afterlife to gain redemption against the malevolent force that put him six-feet-under, the mighty King Calavera.

Now just a bony shell of his former self, Richard must run, jump and swing his way through a selection of multi-tiered stages, bopping baddies and collecting bones. Using his trusty grappling hook – crafted from a demon’s spine – Richard can climb, swing, pull and even slingshot himself around the environment, upping his speed and traversing the landscape.

As you can see from the initial video above, the influence of titles such as Sonic the Hedgehog, Zool, and Kid Chameleon is readily apparent. The cool visual style also gives me a strong Decap Attack vibe, with its spooky-but-charming sprites and stage.

Headcannon is looking for $275,000 in capital, and has at this time of writing just reached the $12,000 mark. The crowdfunding campaign will close on November 30. If development is confirmed, then the team is hoping to release Vertebreaker on PC in 2021. If you fancy checking out the skullduggery for yourself, then a demo is available to download on the Kickstarter page.