[Update: The official trailer for the Kombat Pack is now live, you can check it out at the foot of the article.]

Later this morning, NetherRealm Studios will drop a trailer revealing the contents of the first “Kombat Pack” DLC characters headed to their rad fighting title Mortal Kombat 11. It seems, however, a hastily removed YouTube thumbnail has already spilled the beans, with an image that reveals all six characters, along with their release dates. Thar be spoilers below, obviously.

Alongside the already released Shang Tsung and Nightwolf, we see dates for Best MK Kharacter Sindel (November 26) and Spawn (March 17), so it seems fans of Todd McFarlane’s avenger have still got some time to wait. The two mystery guest characters are revealed as Arnold Schwarzenegger’s T-800 series Terminator (October 8), and DC Comics’ Clown Prince of Crime, Joker (January 28), in what appears to be a slight remodeling of his Injustice 2 appearance. Of note, both these characters will be appearing in blockbuster movies later this year. 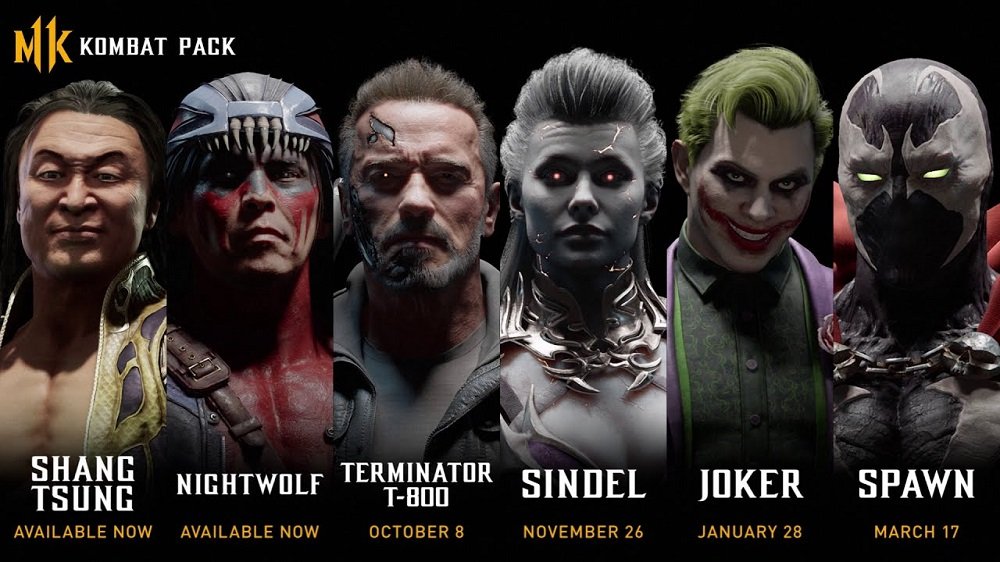 All of these DLC characters were featured in datamines that found their way online earlier this year, so none of this should come as a surprise to the hardcore MK faithful. What is surprising though, is the conspicuous absence of Evil Dead’s Ash, played by Bruce Campbell. Despite de-confirmation by the actor himself, many people were expecting the goofy, chainsaw-wielding nutjob to make an appearance in this pack. The name “Ash” was included in the datamine, and the Kombat Pack teaser trailer even ended with a chainsaw sound effect.

Given that there are other datamined names yet to put in an appearance – including wind god Fujin and Shokan warrior Sheeva – there’s still a sliver of hope for Evil Dead fans (though it should be noted “Ash” could be a shortened form of lesser-known MK character Ashrah.) Why that chainsaw sound though? Did a deal fall through? Do NRS have further surprises planned? Or did we all just believe a little too hard? Time will tell.