[Update: The event is now live: you can get a look at most of the rewards below. Gearbox has re-confirmed that Broken Heart’s Day will run through February 20 at 8:59AM PT.]

After running a series of what Gearbox is calling “micro-events,” Borderlands 3 is about to get some substantial updates.

Detailed in a “Community Love Letter” format for Valentine’s Day, Gearbox notes that the Broken Heart’s Day event is coming soon (in the February patch referred to as “later this month” in the blog, but confirmed to Destructoid for February 13), and will entail special heart icons floating around your character with “unique effects” like buffs, charming enemies to fight on your side temporarily, or explosive loot. The event can be toggled on or off.

Beyond that, more big plans are in the works. The next level cap increase is confirmed for level 53 (up from 50), and will debut with the Broken Heart’s Day event. Three more skill points can be earned by achieving this new goal, and future info on further level cap increases will come “later.” Borderlands 3 is also getting the functionality to skip cutscenes, toggle Guardian Rank (“you’ll be able to disable the entire system if you prefer a more vanilla leveling experience”), toggle events (like the aforementioned Heart’s Day), additions to Twitch ECHOcast, and a True Vault Hunter Mode on top of Mayhem 2.0. Gearbox also reminded folks about the free updates they’ve added since launch.

Gearbox will also pull the curtain back on the next paid DLC at PAX East on February 27 at 2:30PM ET during their [magic filled?] panel via their Twitch channel. 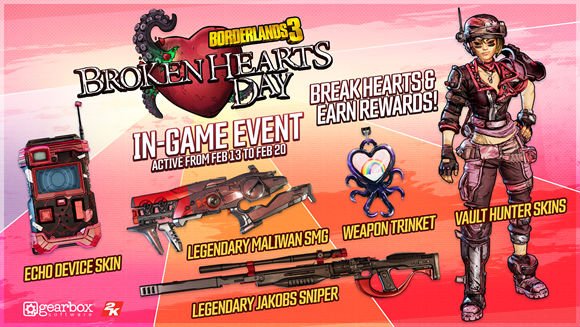