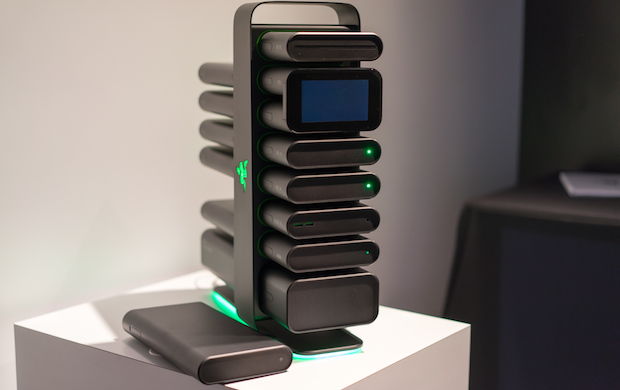 And some details on how it works

At CES today, Razer snuck us in to get a closer look at their newly unveiled modular PC concept, which they’ve codenamed Project Christine. We got to talk to them about how this odd looking tower of blocks would work, and then we got to get up close to take some pictures.

I got in trouble for touching it!

Christine is what Razer calls the world’s most modular PC design. That tall spine is essentially a strip of PCI-E ports that let you plug in modules of any type. The idea is that when new components come out, you can swap out or add new hardware to your machine very easily. Need a new GPU? Just plug it in.

Cool, right? What’s even cooler (pun intended) is that the whole thing is liquid cooled. Mineral oil runs through each component so no fans are needed. Double compression ports let cooling liquid will flow when plugged in, and prevents spills when unplugging them.

Razer says that each module even has its own acoustics chamber, letting them individually customize each for minimal noise. Between the liquid cooling and the acoustics control, this should be a quiet machine.

In our pictures you’ll see some of Christine’s detail. Notice the labeling on each module. Also be sure to check out the detail image of the module port, where you’ll see the data, power, and cooling connectors.

This is a concept, but it does represent Razer’s vision for the future of PCs. They’re looking to make something as powerful as you’d want, but also as accessible as possible. They point out that while most enthusiasts would rather piece together their own machine, this would let the broader audience swap out parts to their liking for the first time.

Razer told us that one idea they’re throwing around would center around some kind of tiered subscription plan for the modules. There could be two or three levels of this plan, where the top level customers might get the top component modules as they’re released, and secondary tier customers would get the next best, or rebuilt parts. The machine we saw was tri-SLI. Maybe you’d like that, or maybe you’d rather get something a bit more modest.

The Razer people we spoke with say that they’re open to feedback. For example, they’d like to hear if you’d be interested in having a subscription plan cover the price. Perhaps your tier choice would determine how powerful of a machine you’d get.

They’re looking forward to seeing the reaction to Project Christine. Razer says that if this is something gamers would like, they’d like to bring it to them.