One of the biggest changes in modern videogames has been the tendency to move towards giving more freedom to the player. This started with larger game worlds and basic dialogue choices and has moved towards being able to mold your very character (and how the game world reacts to him or her) through moral choices.

Moral choices have become a staple of many of the games we play these days, and just about every developer is in a hurry to talk about how their new game will include, improve, or reinvent the concept. What do moral choices really mean in games, though? Is the term just a pointless buzzword that masks an ultimately-bland array of basic choices, such as “kill that guy” or “hey, don’t kill that guy”? What do moral choices set out to accomplish in a game, and do they meet that goal? Finally, what can be done to improve upon them? Why include moral choices?

There are several fairly obvious benefits to adding moral choices to a game. For starters, they allow the player to feel free to do what they want, and less like they are just steering an avatar around an environment without any real choice in what happens. In other words, they make videogames seem more like drawing and less like connect-the-dots. Also, moral choices give games, especially single-player games, more replay value, which is important these days. When gamers are always wondering how many hours of gameplay a $60 game will have, the opportunity to give multiple play-throughs added freshness and appeal is a great selling point.

More than anything, though, I think that moral choices are intended to make you feel connected with your character and the game world. When you are allowed to control certain aspects of your character’s life and what directions they take, you feel more immersed in what is happening. Do games accomplish that goal? Sometimes, they do. However, there is a lot of untapped potential with the implementation of moral choices as we have seen so far.

What needs to be improved?

Perhaps the most glaring problem with moral choices in games is that they are far too “black and white”. There are still too many instances of decisions where you are either doing something obviously good or obviously bad. While that can be fun (everyone likes being the bad guy, right?), it isn’t especially interesting. Let’s take inFAMOUS, for example. While the game itself is fun, the moral choices aren’t always head-scratchers. I mean, you gain Karma if you heal injured civilians, and if you shock them until they soil themselves, you lose Karma. 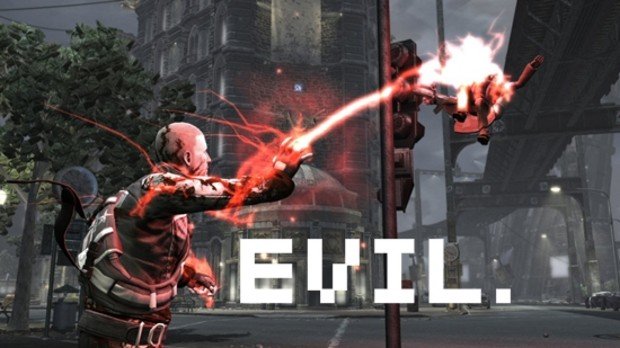 For an example of a better moral choice within inFAMOUS, the decision very early on to either share dropped food supplies with everyone or to hoard the food so that you and your closest friends can eat for a few weeks is much more interesting, because neither choice is purely evil. Morals in real-life are all about subjectivity, which can lead to endless discussion and debate. Morals in videogames have all the depth of a kiddie pool, in most cases. For moral choices to be interesting, they have to include shades of gray and stay away from being black and white.

Also, it is often too easy for the player to make moral choices, and not just because the choices themselves are so extreme. Many times, it’s easy to make a choice (say, shocking the shit out of someone in inFAMOUS) because you just don’t care. If the NPCs are lifeless, annoying blobs that just walk around aimlessly and get in your way, it makes it too easy to go the evil route. Similarly, it is hard to make people really want to be good if they don’t care about those that will benefit from their good actions within the game world. Without an attachment to the game world and its inhabitants to begin with, the choices themselves lack any real meaning.

Speaking of NPCs, for moral choices to truly work in an open-world game, NPCs have to be more dynamic. For instance, in Oblivion, it was easy to make every guard in the game hate you if you start a couple of fights and kill a few of them. The part that takes you out of the game is when you save all of Cyrodiil from certain doom, only to have the guards be confused as to how to address you. They will call you the Champion of Cyrodiil when you speak to them, and then call you everything in the book as you leave. 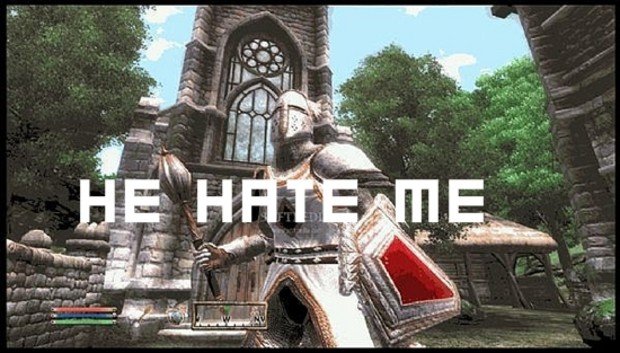 For moral choices to really work, their response must factor in more than just whether or not all guards are supposed to hate you. This goes hand in hand with making moral choices less extreme. If your only choice is to be Mother Theresa or the second coming of Hitler himself, then sure, all NPCs will probably react to you in the same way. If you make choices that are justifiable in one way or another, though, different NPCs should react to you in different ways according to their own morals and background. Otherwise, all the moral choices in the world won’t make a difference, as the NPCs are breaking the fourth wall every time you encounter them by either worshiping at your feet or pelting you with blunt objects, with no real reactions in between.

Finally, with all the emphasis on moral choices, developers need to remember that not every choice needs to be a moral choice. Most of the time in life, your choices are not merely good and evil. While killing someone who has never done anything to you is obviously an evil thing to do, what about killing someone who has harmed a member of your family, or an innocent child? While stealing is obviously wrong, what if you are stealing because your family is starving? Ideally, these kinds of “gray area” choices will be emphasized in future games, and other characters in the game world will react according to their own morals. Some will think that stealing is wrong, no matter what the reason, and others might think that it’s acceptable if you have no other choice and you’re trying to survive.

There are some games that have advanced moral choices in a positive direction and made them more interesting for the player. For instance, look at BioShock, where you are almost instantly faced with the decision to either “harvest” the ADAM from a Little Sister (killing her in the process), or save the possessed little girl for a lesser amount of ADAM. Depth is instantly added to the decision, because if you do the “good” thing, you’ll be doing so at the expense of your character’s ability and making things harder on yourself (at least at first) as you play the game. Meanwhile, the presentation of the girls as nasty little demons and the chirping in your ear by Atlus and Tenenbaum muddles the decision even further. All of this adds up to a decision that could easily have been very extreme and rather boring being made into a much more difficult and interesting one. 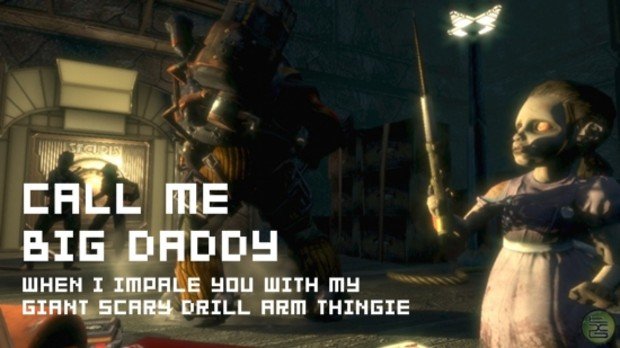 Mass Effect also had a number of moral choices that avoided being purely good or evil. The idea that you can save the universe as a squeaky-clean nice guy who does everything by the books, or as a relentless bastard (or bastardette) who will sacrifice anyone for the greater good makes each decision that much more interesting. Later in the game, there are a lot of choices that boil down to not just good and evil, but rather whether you trust non-human beings, whether you will take advantage of situations to advance your own race, and other dilemmas. Although you are still limited to the same ultimate goal either way (saving the universe and all of that), you actually feel more free in a game like Mass Effect because you aren’t stuck with either being a goody two-shoes or a mass-murdering jackass. You can make your decisions based on the particular situations at hand, and your character ends up being much more dynamic for it.

Where should achievements and trophies fit in?

In most cases, achievements based on moral choices will accomplish some of the objectives of the choices themselves, such as encouraging multiple play-throughs. In Fallout 3, each achievement that corresponds with a certain level has three versions — one for good karma, one for bad karma, and one for neutral. Almost certainly, this alone has led to players creating multiple characters. However, they may have done so anyway, just to see what changes when you do things in a different way. The question is: does this make the moral decisions themselves trivial? It would seem so, since rather than making a choice based upon your own feelings and morals, you’ll be playing through and taking certain paths on purpose simply to obtain a particular achievement or trophy.

In some cases, achievements and trophies can end up letting the player off the hook, too. For instance, before I encountered my first Little Sister in BioShock, I had already decided not to harvest her, as I knew that there was an achievement for not harvesting any Little Sisters during the game. If the perfect moral choice is one that puts the player on the fence and makes it hard for them to decide what to do, having an achievement or trophy tied in to making one choice or the other can only undermine that cause. After all, if you’re not sure what to do, an achievement or trophy being awarded for one path or the other can be the tie-breaker. Obviously, thinking along those lines breaks your sense of immersion in the game and makes you feel less connected to the choice you made. 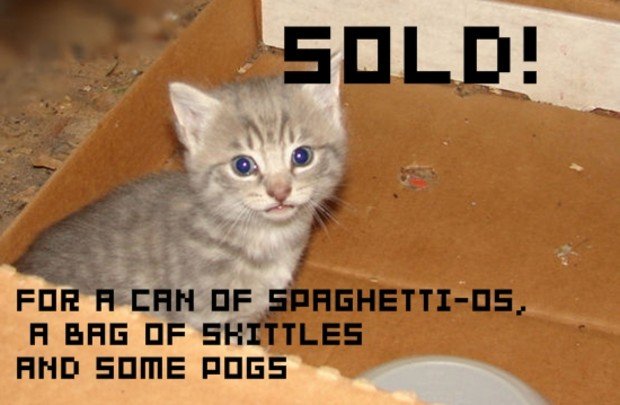 In a perfect world, moral choices will not just be pointless fluff or mindless and boring decisions, such as whether to adopt a baby kitten or sell it into slavery. Instead, they will be questions that make you think before answering, help give you a better sense of ownership and immersion with respect to who your character is and what they do, and extend the life of your games at the same time. In addition, if games really want to be considered as art, having choices that can inspire conversation, debate, and even a little controversy is a great way to start.

But seriously … sell the kitten into slavery. The market for kittens is awesome right now.