The Xbox 360, the PS3, and to a lesser extent the Wii are attempts by their respective companies to introduce a central media hub into our homes. The wealth of services they provide beyond gaming, such as news tracking, movie streaming, and social networking, provides a computer-like experience without many of the hassles of PC handling. Ultimately, game consoles and PCs will merge into a single, streamlined device for the living room that can be enjoyed by the whole family, chiefly operated via a simple controller.

These efforts have only recently gained mainstream acceptance, but the vision of a global communications network through a game console is not a new one. Back in the ’80s, then-president of Nintendo Co., Ltd. Hiroshi Yamauchi dreamed of dominance beyond the gaming market. His ambition grew Nintendo from its roots as a playing card manufacturer into a toy company and then into a videogame giant while the company explored many smaller ventures in between, but he wasn’t satisfied. He wanted Nintendo to become THE leader in the communications industry as well. 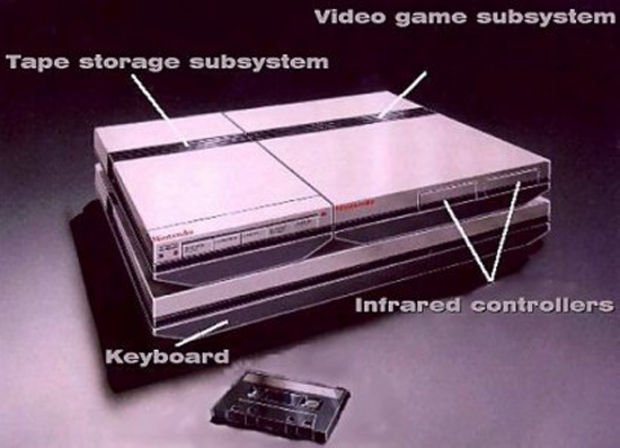 Before that, Nintendo had already expressed interest in non-gaming applications of the Famicom/NES hardware. When former Nintendo of America president Minoru Arakawa sought to introduce the Famicom to the West, he wanted to redesign the original red and white model and add a number of peripherals for computer-like functionality.

At the January 1984 Consumer Electronics Show, Nintendo unveiled the Advanced Video System, a sleek and sexy unit that included a keyboard for BASIC programming, a tape-deck storage device, two infrared controllers, and a Star Trek-ish Zapper. Parents would want to purchase the AVS for their children because it had educational benefits, yet the machine would still play all the top games coming out of Japan. 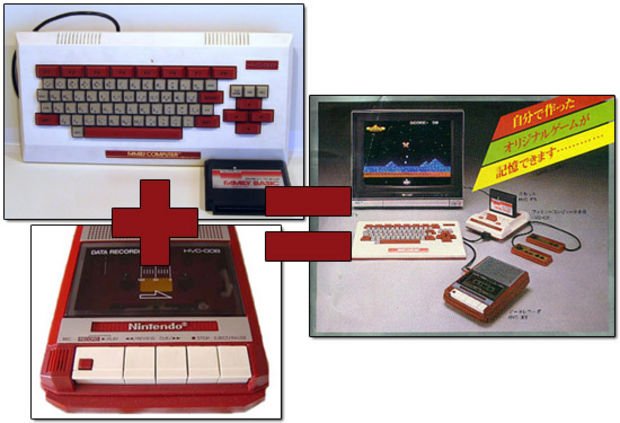 Investors were not pleased. The AVS was shown again at the June CES to the same cold reception. Nintendo would redesign the hardware again into the Nintendo Entertainment System and market it as an entertainment center rather than a PC-lite. Of course, neither NCL nor NOA totally abandoned their plans as noted by built-in expansion ports (on the front of the Famicom and on the underside of the NES) for the day when consumers desired expanded functionality. The BASIC keyboard wasn’t entirely shelved and made an appearance in Japan as the Family BASIC, working in tandem with the Famicom Data Recorder for saving data (it also doubled as a standard tape deck). 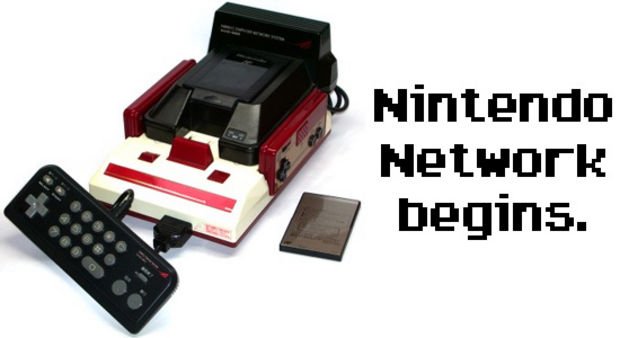 In 1987, NCL held a gaming tournament in Japan using a golf game for the Famicom Disk System. Players would take the disks to Disk Fax machines and submit their scores to NCL headquarters. This litmus test proved that a Nintendo network was quite feasible, and so the Family Computer Communications Network System was launched the following year. By purchasing a Communications Adaptor (read: $100 modem), you could turn your game machine into an information hub. Since Famicoms were in roughly one third of homes in Japan, Nintendo had to potential to be even bigger than the largest communications company at the time, Nippon Telegraph and Telephone.

Aside from playing network games like go, you could buy, sell, and trade stocks (partnerships were made with many big brokerage firms like Nomura Securities Co., Ltd.), do banking, buy airline tickets, and more. There was even a Super Mario Club for distributors to check individual game information such as online reviews. Unfortunately, many roadblocks prevented the network from spreading like wildfire. Phone lines would be tied up and traditional methods of doing business turned out to be far simpler. Worst of all, kids were unwilling to give up their game time for their parents who in turn couldn’t see the Famicom as more than a children’s toy. In total, only about 130,000 homes jumped aboard the network.

Yamauchi didn’t see this as a failure but rather a minor delay. Besides, the US would most definitely be more welcome to a global Nintendo Network. Computers were in roughly 15% of American homes and the NES in more than double that. If all went according to plan, ten million homes would be linked up by the end of 1991. In comparison, the Prodigy online provider would go on to only have 1.3 million users by that target date.

Senior vice-president at HBO Jerry Ruttenbur was called to establish this network. He had made some inroads with companies like AT&T and Dow Jones, and Nintendo designers developed a data terminal cartridge for the NES with in an interface that looked like a version of Super Mario Bros. That idea fell flat, so Ruttenbur tried a new direction whereby users could download games to floppies or establish an online handle and chat with other users in a BBS-like environment. That idea also fell through. 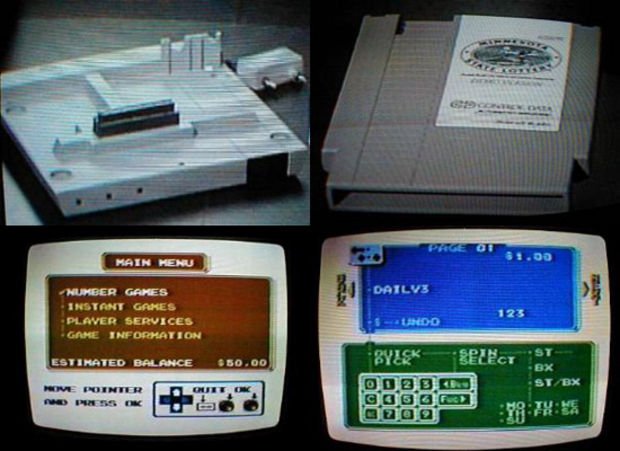 NOA faced the same issues that NCL did: lack of users willing to do business on a game console, the expense of using a phone line for extended periods of time, etc. All network plans went dormant until September 1991. Control Data Corporation, which handled several state lotteries, wanted Nintendo’s help to boost poor lotto sales in Minnesota. Ten thousand participants paid a monthly fee of $10 to test a special modem for the Minnesota Lottery. The test was a success, but once again problems arose. The state’s attorney general criticized Nintendo for exposing kids to gambling, not trusting the easily circumvented safeguards to prevent children from using the service. Rather than face further backlash, Nintendo went back to the drawing board.

That was pretty much it for Nintendo’s network plans on the Famicom/NES. Attempts were made with future consoles like the Satellaview for the Super Famicom and the 64DD for the Nintendo 64, but neither met the numbers of the Communication Adaptor’s already poor sales and never came to the West. It is only with the Wii that Nintendo has the means to meet the goals originally laid out in the ’80s, but now the company must contend with the admittedly more robust features of the Xbox 360 and the PS3.

But imagine if Nintendo WAS successful with the global Nintendo Network. Imagine if BASIC programming on the Famicom had become more than an enthusiast hobby and was brought over to the US as a result. If somehow Nintendo found a way to overcome all the hurdles preventing its expansion, a lot of the innovations from the past few years would have arrived much, much sooner. Console online gaming might have become widespread by the mid-’90s as opposed to the start of this century.

Would Xbox Live have had any impact? Would there have even been an Xbox? Microsoft’s biggest success in the console gaming space has been its robust network, but had Nintendo’s network really taken off it would be Microsoft playing catch-up instead of the other way around.

Remember Linux for PlayStation 2? Instead of an optional kit, it might have been included out of the box with every system! In fact, Sony may even have had its own operating system for the PS2, one that was simple enough for newcomers to enjoy immediately but with the flexibility of an open-source OS. The PS2 could have actually been the supercomputer that Sony kept trumpeting it as.

And Nintendo? The GameCube may have actually had DVD playback in all models! Before that, Nintendo could have been a key player in the multimedia revolution in the early ’90s. A joint venture between it and either Sony or Panasonic might have actually paid off! Some of those other multimedia consoles may not have died so quickly and some could have actually become massive successes! Sega would still be making consoles! 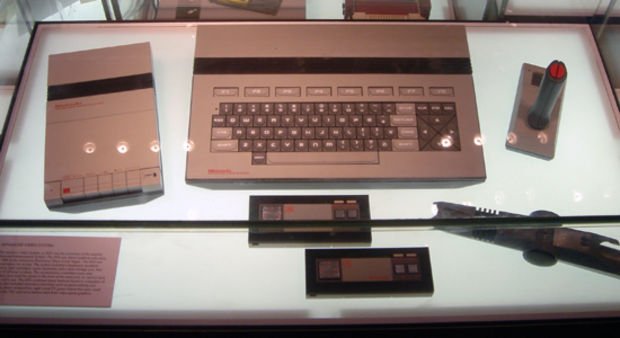 It is hard to gauge exactly how the industry would have evolved had Nintendo turned the NES into a mini-PC. The impact would have been gargantuan. As it stands, Nintendo’s earliest forays into non-gaming services on gaming hardware are for the history books and the Nintendo World Museum. Nintendo’s dream will no doubt come to fruition eventually but it is highly unlikely that Nintendo itself is going to be leading the charge. Things could have been different, though.