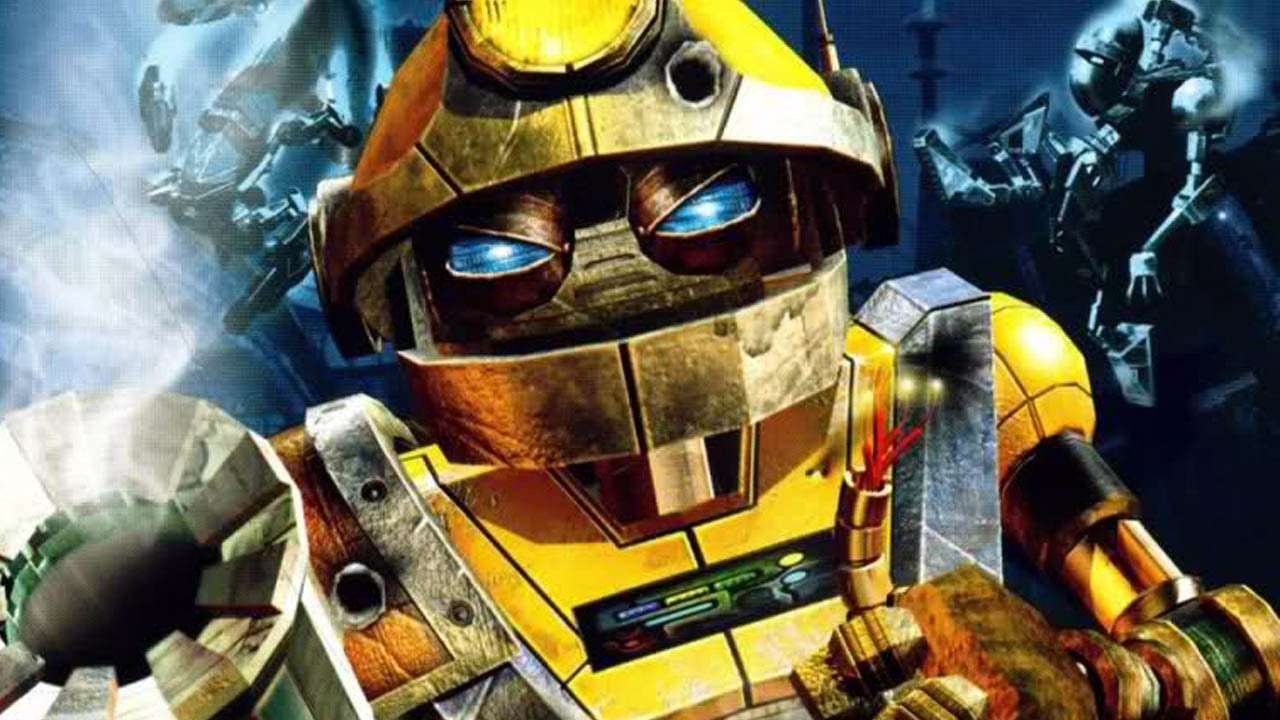 One can be sure that discussions of the Konami-Kojima fiasco will go on for several years. If it doesn’t, I’ll be back. Depending on how Death Stranding turns out, this bit of gaming history may also become a genuine legend. I say this because, come next year, I anticipate that many will be trying to use the power of hindsight to answer the questions that we can’t begin to answer at this time.

But for now, one thing that is for sure is that Konami is happily(?) sitting on the rights for many beloved series. This means that we will have to suffer news of these nefarious necromancers making the corpses of once beloved series’ dance in large HD screens sitting atop pachinko machines. 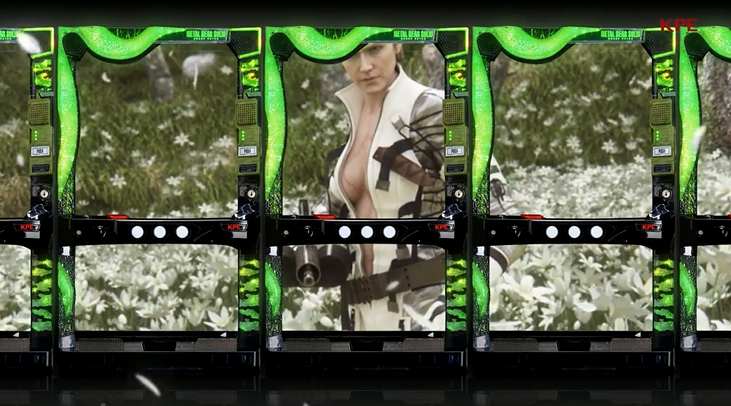 “There is nothing left inside me now. Nothing at all. No hatred, not even regret. And yet, sometimes at night, I can still feel the pain creeping up inside me. Slithering through my body… Like a snake.”

This was not the first nor will it be the last time that a beloved game and/or series has been buried. I am not here to tell you the story of how Metal Arms: Glitch in the System was buried. That would be too painful of a story to tell. Oh, and Destructoid alumni Jim “thank God for Him” Sterling already suffered the weight of telling that tale for me.

I started this blog after seeing the latest DTOID quickpost trend was called #Sequeltoid and I saw DTOIDer ChrisHannard link to Jim’s good old article. I present to you all one of the best damn third-person shooters I have ever played. The unsung masterpiece: 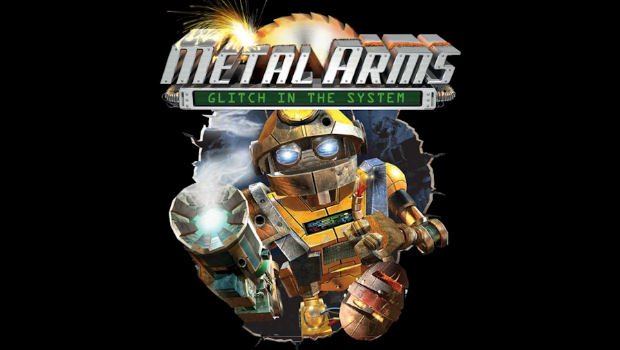 The glorious theme music is playing in my head as I type this.

Many of my favorite games are flawed, but they nail all of the small things to make a memorable experience. Shadow Madness is a great example of this. Its item and leveling systems aren’t good, levels cap at 15, and many items are totally useless and waste storage space. But I’ve yet to play a JRPG with better dialogue (Note: Shadow Madness is an American production.). That alone makes the game worth it, though there are several other things I love about the game as well. So, with all the love in my heart for you, #3 worst RPG ever?! Fuck you, X-Play. That game is great.

I find Metal Arms to be especially difficult to find a flaw with, however. I’ll try to keep things short and sweet while I tell you just how serious this game is. 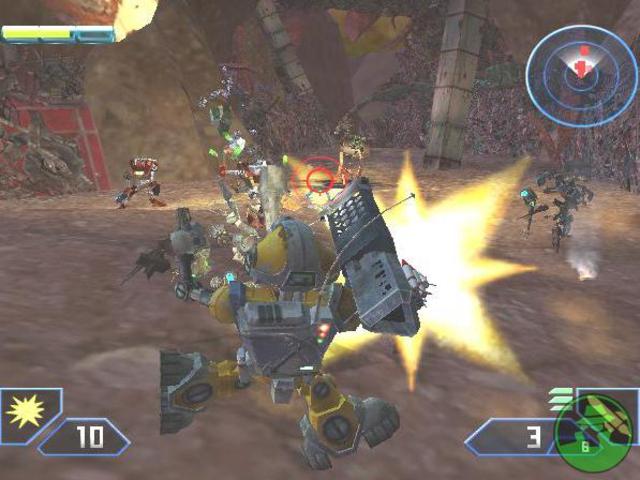 Pictured: A game that is serious about being Great. Yeah, that’s right, capital ‘G’.

The game opens up with several other bots discovering your body and soon you find yourself waking up in a room surrounded by several bots. You notice two distinctive robots. To your right is the Colonel. In his authoritative voice, he asks, “Hey Krunk? Were you able fix this mystery bot?”

To your left, the tubby and grumpy Krunk responds, “Of course, I f#$%ing fixed him! It was a huge pain in the f#@*ing wastepan because he is some kind of a custom jobby, but nothing I couldn’t handle…he should be good as f#*@ing new.” I’m not censoring myself here, much like Conker, this game loves to endearingly censor any instance of cursing in the game. It really never gets old. Every character in this world seems to be serious except the old grump that is Krunk. He reminds me of a lovely combination of Clint Eastwood in Gran Torino and Rick from Rick and Morty.

The enemies aren’t messing around, but neither are you 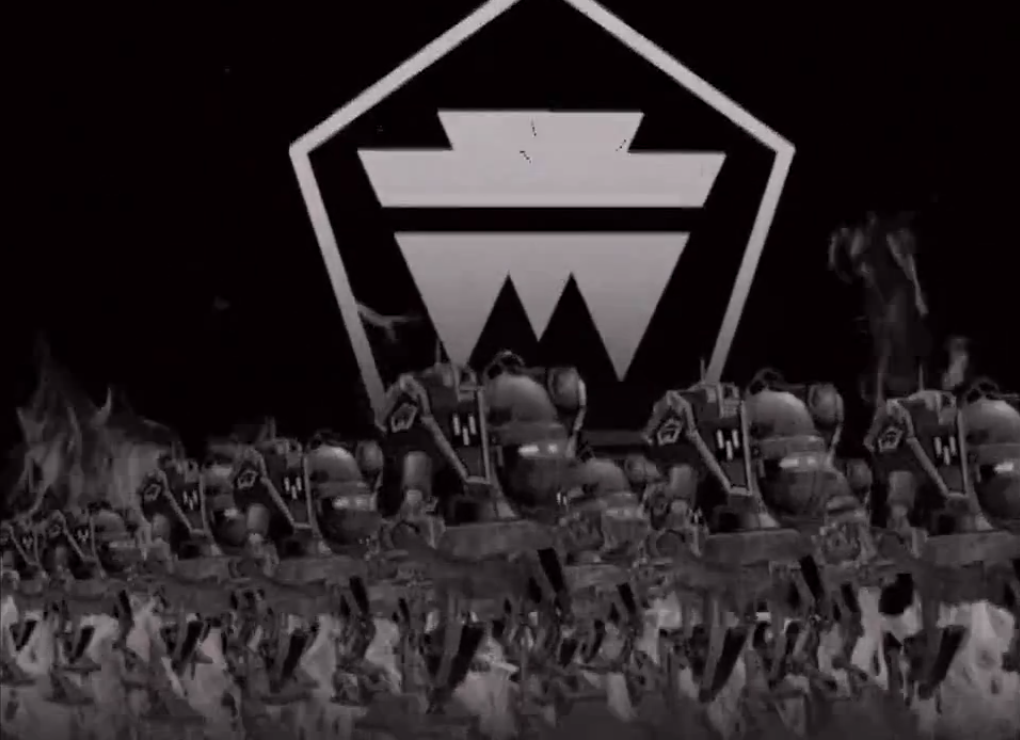 Yes, some of the robots have cheesy German accents

While this game is not quite Ratchet and Clank meets the Souls series, the comparison wouldn’t be too unreasonable. Alright, not really. The game is just hard and comparing things to Souls games without good reason is just lazy. Let’s talk about how it might actually be comparable.

Your enemies will run around in terror as you tear them apart, their machine guns will helplessly dangle and flop around if you damage them enough, said dangly bits will still spray all over, and their high-pitched screams are delightfully amusing. All of this elevates the experience further because the enemies are tough and can easily have you doing the same. The devil, or raw pleasure, is in the details.

The game is challenging enough to make you consider your every option. From your choice of weapon, to how you single out your enemies, to whether or not you should buy some more upgrades or save up for new tools. Even if you welcome the challenge, later on in the game the weapons get more and more fun. You’re dead inside if you don’t love the control tether.

Start around 40 seconds in if it doesn’t automatically start you there. Also, watch the bit at 2:10.

With the control tether, if you were slick enough to get behind an enemy undetected, you could assume control of one of them. The other enemies might get startled and wonder what’s up with you, but they still take awhile before they conclude that you’re a threat. With that extra time, you can take your new puppet and start rousing some rabble elsewhere. Also, if you manage to take control of a Titan you might be in for some power fantasy ecstasy. 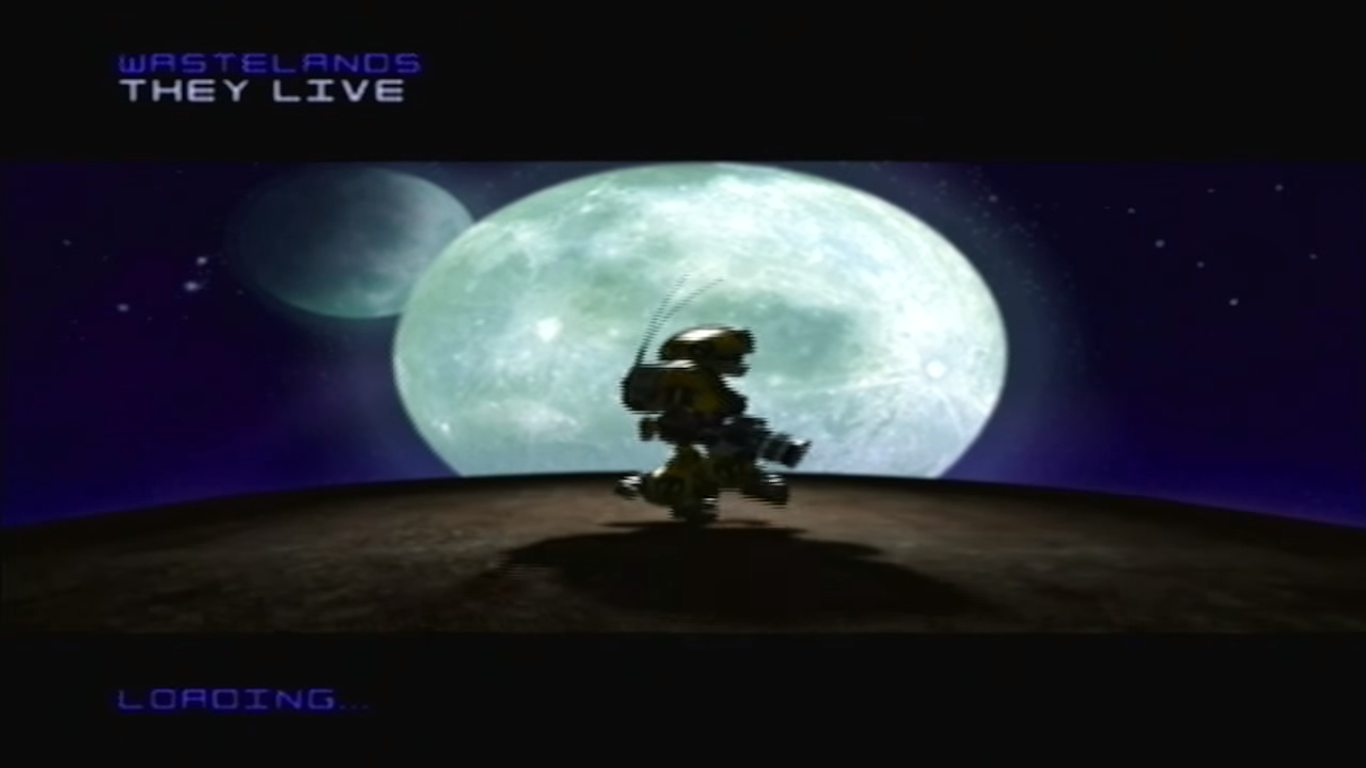 “Just when you think you know the answers, I change the questions.” – Roddy Piper

This doesn’t have much to do with the movie. It’s a classic, though. Go watch “They Live.” May you RIP Rowdy Roddy Piper…

Every once in awhile you already know you were playing something special. Many people who have played Conker’s Bad Fur Day or Half-Life 2 back when they first came out know what I mean. The games were already special, but then these games threw a level at you that changed everything: like Conker’s spooky mansion and Half-Life 2’s “You don’t go there” Ravenholm. For Metal Arms, that level was “They Live.”

As tense as this game tended to get, the tone was still relatively light, but once you get to this stage you will eventually find yourself up against the terrifying Zombie bots. These enemies are after everyone. You, the enemies…um you. The way they move is similar to the zombies in Left 4 Dead. They’re fast and they’re relentless. But these bots have one other trick, when you break them apart they can magically reform seconds later like your typical unbeatable anime villain. You have to kill every one of them twice, but you need to be careful not to be swarmed by them.

And the level itself is just as dark and scary as its inhabitants. 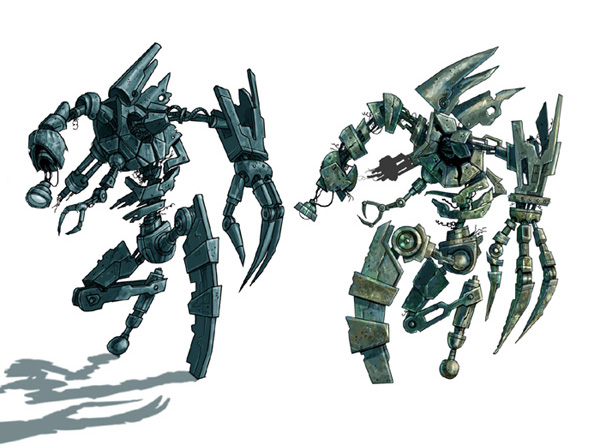 Concept art for the zombiebots

The replayability, the unlockables, the EVERYTHING

I mentioned earlier how funny the enemies can be, what with their screams and dangly bits as you harm them. This game oozes so much more charm throughout the entire game. There is so much that I couldn’t even begin to tell you all of it. One of my favorite bits is the pair of merchants that you will find in the game. Typically, you will hear them before you see them as the two always have a boombox blasting music. Can’t miss ’em. One is the tiny “George” like character and the other is a huge don’t-let-him-near-your-puppies “Lennie” kinda character.

Every game nowadays has a merchant that will ask, “Watcha buying?” but very few merchants will ever be as exciting as this duo. You’ll learn to keep your ears out, as you will most probably have to hear their music before you can find what hidden nook they safely lodged themselves in. If you’re playing this game on Hard, or even Normal mode, you’re gonna need them every once in awhile.

I also can remember the time I browsed their wares, but didn’t buy anything. The little guy told me to buzz off and the big guy flipped me off! 🙁

I must note that the game blurred out his finger. 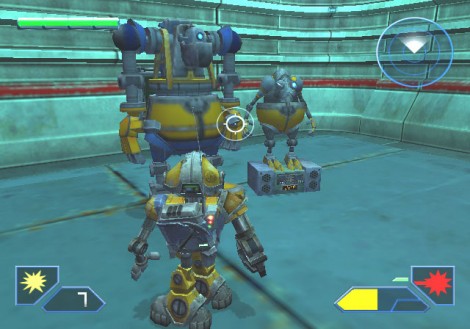 I remember the first time I was flipped off in a videogame, do you?

The game also has secret chips and speed run chips for each stage in the game. These chips unlock characters and bonuses for the multiplayer, but they’re also just simple fun and are really well hidden. I hadn’t had so much fun collecting hidden items since finding the minicons in the Atari Transformer game. They actually feel like accomplishments to get. For some reason, I found them much more interesting than your average game’s hidden items.

I haven’t even gotten into talking about the game’s many weapons and vehicles! The vehicular sections are also plenty fun. I can’t get too into it as I don’t want to write too much, but be it known that there are multiple kinds of grenades, you have RPGs, Rivet guns, lasers, a saw blade shooter that would make Cut Man proud, and many other weapons.

I’m not the only one shouting to the videogame gods 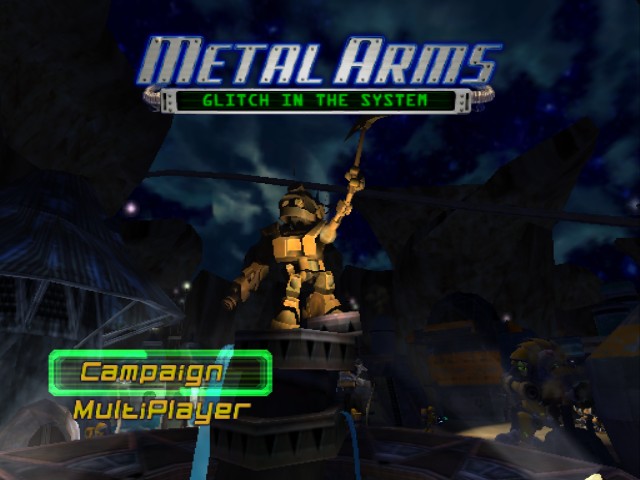 If you loved the game, or would love to get more of this game, check out We Want Metal Arms 2 (@WWMA2) on Twitter and keep plugging the original with the hashtag #PS2PS4. The original developers of this game deserve at least that.

If anybody else had the privilege of playing this game, be sure to share your favorite stories.