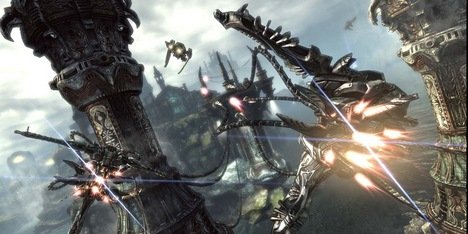 With Unreal, one could say I’ve more or less saved the best for last in my final hands-on impression of the games at Midway’s winter event last week in Las Vegas. For many, Unreal Tournament was THE online game that kept you hooked, excited, and sweating in the early days of hardcore PC gaming.

And, if you’re like me and do enjoy the occasional blood and tears chaos, then you’ve been eagerly awaiting Unreal Tournament 2007 or as it is now called, Unreal Tournament III. I got to play a capture the flag map of UTIII for almost two hours last week on the PC and if you’re curious about what I thought, hit the jump.

You of course have the new and improved graphics engine, but one of the biggest enhancements to the Unreal Tournament formula is the addition of some new, adreniline-pumping vehicles. Besides your own personal hoverboard you can use at any time, there were a variety of moving things at my disposal.

Along with your standard tanks and other personal carriers, the biggest and most exciting vehicle was the huge Dark Walker you could use to traverse the map and blast away just about anyone with one or two shots. Now, before you scream about balance, this Dark Walker was actually fairly easy to take down once you understood the game a bit. It’s easy to hide in a nearby crevice and blast the thing with rockets — which were very easily available throughout the map.

To defend itself from little buggers trying to shoot it down, the Dark Walker has a secondary fire function that sent out sounds waves to knock down nearby enemies. Cool, huh? I thought so.

As far as other gameplay, this is your standard Unreal Tournament. Everything you’ve come to know and love about the series is still there — it’s just shiny and new. Even the standard Unreal weapon set remains intact.

After two hours, I can easily say I wanted more — and I was just playing one map over and over. If you’re a PC gamer and you’re a lover of fast-paced FPS, then you want this game. In fact, you want it bad.

I wanted to steal that PC and that demo and take the damn thing home. I honestly haven’t been this excited about an Unreal Tournament game in years. Thanks for the cock tease Epic.