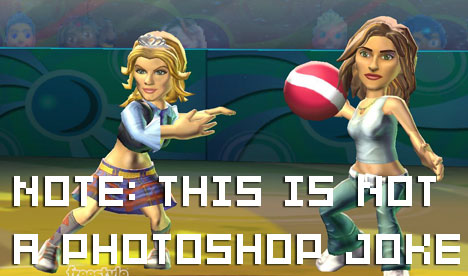 The cries of “what the f**k?” after hearing that Kim Kardashian would appear in Electronic Arts’ FaceBreaker can still be heard echoing in the halls of Casa Destructoid. But this … this is … we’re speechless.

EA has announced that they’ll be releasing a casual Wii sports title called Celebrity Sports Showdown that will pit celebrities like Avril Lavigne and Keith Urban against one another in 12 different outdoor sports. The age-old question will finally be answered: which celebrity’s curling champion claims are legit — Fergie or LeAnn Rimes? One of them has to be lying.

Well, at least some of them are actually athletes, like Reggie Bush, Mia Hamm, and Nelly Furtado. Celebrity Sports Showdown will be available exclusively for the Wii this fall. The full punchline press release, which lists all of the game’s sports, can be found after the jump.

REACH FOR THE STARS WITH EA’S CELEBRITY SPORTS SHOWDOWN

Guildford, UK – Wednesday, August 13, 2008 – Electronic Arts Inc. (NASDAQ: ERTS) announced today that Celebrity Sports Showdown, an all-new intellectual property, is currently in development at EA Canada and will be the first Wii title to launch under the new EA SPORTS Freestyle brand. From the makers of EA Playground, Celebrity Sports Showdown features 12 outdoor sports games and is the ultimate party game to play with people of all ages. Play as your favourite celebrities, with featured stars including singers Fergie and Avril Lavigne, and athletes like Paul Pierce and Mia Hamm, to determine who will be the ultimate celebrity athlete. Get off the couch and get into the action with fun and easy-to-play controls designed specifically for the Wii.

“We feel that this game is the EA SPORTS Freestyle answer to a great Wii party game. It explores the lighter side of sports and pulls inspiration from the entertainment spectacles that are so prevalent in pop culture today,” said Dave McCarthy, Executive Producer. “Celebrity Sports Showdown will bring people to the party with a collection of games and celebrities that appeal to everyone.”

Hit the great outdoors as you paddle through rapids in Wild Water Canoeing and hold on tight as you fly behind a speed boat for some wild Inner-Tubing! Get out of the water and onto the court as you hit away in Beach Volleyball and Smash Badminton, or take aim at your opponents in Arena Dodgeball. Cool down while you hit the slopes in Slalom Showdown, or sweep past your opponents in Curling. Get a bird’s eye view scaling a wall in Cliff Hangers or flying through the sky in Air Racers. Perfect your aim and nail the targets in Rapid Fire Archery, then gauge your strength in the gladiator-style Joust Duel, and hold on to the reigns of a champion thoroughbred all the way to the finish line in Hurdle Derby. With such a variety of sports to choose from, Celebrity Sports Challenge is the ultimate party game experience.

Celebrity Sports Showdown will be launching for the Wii™ in winter 2008. The game has not yet been rated by PEGI. Media can find screenshots of the game at www.electronicarts.co.uk/press. For more information, please visit www.easports.com/celebrity.