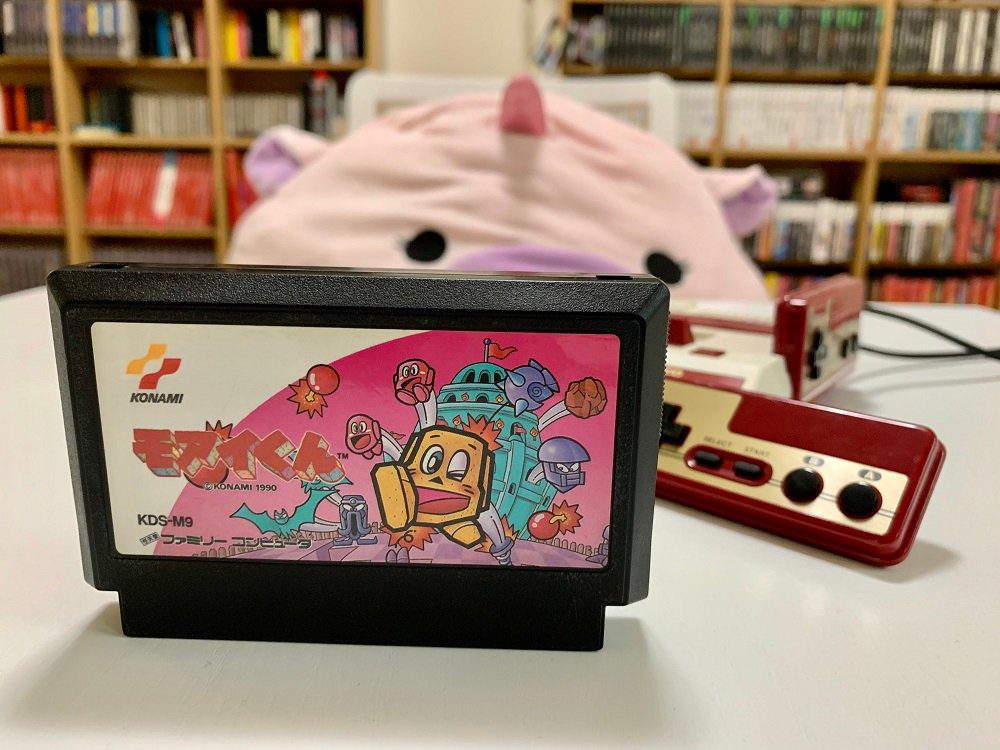 Are you tuff enough to save your friends this Famicom Friday? Get it?

I love Moai. It’s an interesting aesthetic; huge, monolithic humans with warped proportions. But do you know who loves Moai more? Japanese video game developers. They show up as bosses and in the background all the time in a wide variety of games such as Atlantis no Nazo, Rainbow Islands, and StarTropics. Even more so, Konami seemed to be crazy about the stone statues. They were a staple in their games, even appearing in Castlevania as a bonus item.

The heavy-browed monoliths would often alternate between antagonist and protagonist roles. They were a mainstay baddie in the Gradius series, while Konami Wai Wai World featured a Moai as one of its playable protagonists even though it had yet to feature in a title of its own. But the Moai would finally get the spotlight in Moai-Kun, a side-scrolling puzzle game found only on the Famicom.

This sort of puzzle game certainly had its day in Japan. We got a few of them over here: Solomon’s Key and Adventures of Lolo are two such examples, but in Japan, they lived on through the ‘90s in games like Mario & Wario and Super Gussun Oyoyo. They’re heavily focused on moving blocks to make it to the exit with a few bad guys thrown in for good measure. Maoi-Kun is rather simple in that regard; block moving and bad guys.

The goal of each level is to rescue all the other Moai scattered about and escape through the door. There’s some light combat, gentle platforming, and the occasional bomb to plant, but mostly it’s about moving blocks or breaking them with your head. Each level is exactly one screen in size, with 56 levels in all. They start off dead simple but quickly ramp up in difficulty. There’s a password system that allows you to continue from various checkpoints, and while you do have an allotment of lives, there are infinite continues.

It’s a pretty tight little game from beginning to end. The puzzles are well thought out and I did find myself getting stuck every so often. The life system is a little unusual, especially since it sometimes sends you back a few stages and, since each one has but one solution, there’s little difficulty in replaying them. I get that lives were sort of a vestigial feature of the time period, but I feel it’s something that doesn’t fit with the genre.

However, I’d say that the game’s greatest strength is its aesthetic. The graphics are bright and colorful, or at least as bright and colorful as a Famicom can get. The music is jaunty and fun, but there aren’t that many tracks to it. It’s simply an infectiously light-hearted game.

Except there’s a suicide button if you irrevocably screw up. Not unusual for the genre, but kind of jarring in such a cute title.

It’s also kind of insubstantial to the point where it feels somewhat like a bargain title. I couldn’t find any data on its initial value to disprove this, but most cartridge games didn’t budge on their price tag. Fifty-six levels can go by pretty quickly, and once you’re done, you’re done. You’ve figured everything out and could do it all over again if you love repetition. It’s not as taxing as Solomon’s Key but it does have more puzzles than Adventures of Lolo. It’s a great experience while it lasts, but your mileage is definitely going to vary.

I find Moai-Kun to be somewhat irresistible. Adventures of Lolo is cute and all, but the backgrounds are extremely similar and without personality. Moai-Kun has personality to spare. I kind of wish the art style and character were applied elsewhere in other titles, potentially of different genres, but it’s too late to change that now, and my time machine was damaged after I went back and prevented the Nintendo PlayStation from ever happening. You’re welcome.

Unfortunately, it looks like the game has never been re-released, with the Famicom remaining its only home. I imagine that chances are dim that it will find its way to a new platform at this point, but you never know. Maybe if we make enough noise, Konami will be roused from atop its dragon’s horde and relinquish the corpses of some of its favourite kills.

Luckily, Moai-Kun is almost entirely in English, so it’s ready to play, even if you don’t know Japanese. There is a fan translation if you absolutely can’t stand looking at katakana and the title screen is some sort of affront to you. I think that’s a weird hang-up to have, but I’m not here to judge.