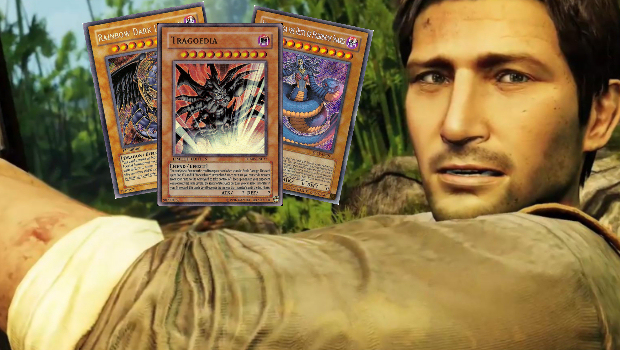 Uncharted: Fight for Fortune was only officially revealed this morning, but already the “fanbase” is up in arms and inconsolable at the idea that a spin-off game would dare to actually spin off from something. THE VERY IDEA!

At the time of writing, the Youtube upload of the game’s trailer has 67 Likes to 124 Dislikes (Update: 225 Likes/583 Dislikes), and comments of outrage are pouring in. Sony’s been accused of destroying its product, and wasting time that could have been spent on a Golden Abyss sequel.

You already know what we did. Yep, we put our special JOURNALISM hats on and culled the very best comments from the video, displayed below for your sexual pleasure. Enjoy!

“Damn. Really Sony? Also how is this going to “expand”﻿ Golden Abyss? It’s not a DLC and it doesn’t even have Golden Abyss in its title. I was hoping you were going to make at least 1 more Uncharted game…a real one. Thumbs up if you guys agree!” – suiton629

“DON’T DO THIS TO UNCHARTED, YOU BASTARDS I HOPE EVERYONE WHOM MAKES THIS GAME BURNS IN THE FIERY PITS OF HELL.﻿” – ImALemonLicker

“What in﻿ the name of Pokemon is this?” – onQ Quincy

“WHAT HAPPENED SONY?!! THE ONLY GAME THAT SHOULD HAVE CARDS﻿ IS YU-GI FUCKING OH!!!! Im sorry but this is… idk what to say really, just doesn’t fit in uncharted.” – Evengador20092

“My dream has been realized. Take all of the delicious sugary action of Uncharted and dispose of everything likable about the﻿ franchise to appeal to the obviously large trading card game audience. Good move.” – Chris Foos

“OHHHH﻿ FUUCCKKK MEE. This is the last nail to Vita’s coffin, i’m getting a fukin’ 3DS!” – TheAppaking

“R.I.P. Uncharted. .one of the best series of﻿ all time, I hate you Sony motherfucker” – xHiryuLegion

“What a STUUPIIDDDD idea for a game.. this will sell horribly hahahahaa good.. hope they don’t get good sales.. they﻿ are just so pathetically stupid!” – 0newHundredPercent