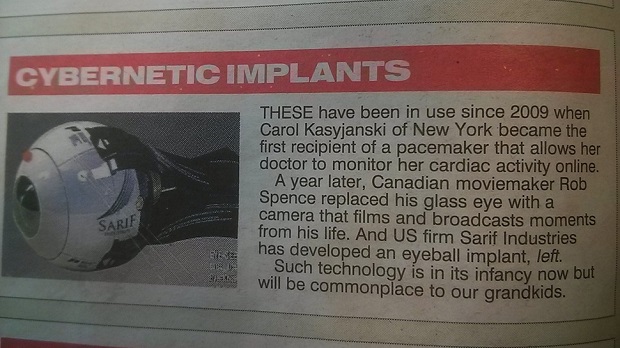 Whereas I only wish it were real

The Sun, the bastion of quality newspaper journalism and good taste, has printed a small, yet to me, totally hilarious blunder. A section of an article about artificial implants and limbs has a picture of a cybernetic replacement eye developed by Sarif Industries.

Problem is, the eye in question was a piece of concept art for Deus Ex: Human Revolution and Sarif Industries is just a fictional corporation. Palm, meet face. Eidos Montreal’s reaction on its Tumblr was pretty funny too.

It’s got me thinking if there’s anyway we can prank papers that have, let’s say, a poor record on fact checking? Could we convince the Daily Mail that Saddam Hussein was developing a nuke-carrying mech called a Metal Gear? Maybe we can tip off the Telegraph that there’s a company that can let you re-live your ancestor’s memories through a device known as The Animus. The possibilities are surely endless.