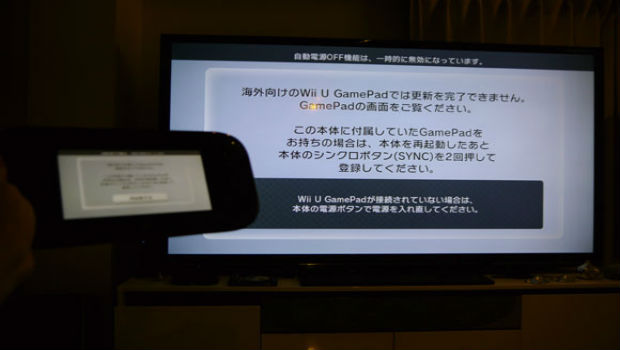 [Update: The Japanese message above reads, “The update cannot be completed with an overseas Wii U GamePad.” In other words, it seems that you can use an imported GamePad to play games, you simply can’t apply firmware updates without the original. Apparently, GamePads have their own firmware that is unique per region, hence this uncommon hurdle.]

Apparently region locking the console wasn’t enough: Rocket News has learned that Nintendo has gone a step further and region locked the actual GamePads as well.

In reality, unless you have a lot of relatives visiting from out of the country, bringing in their GamePads for a console that currently only supports one GamePad, I don’t see this being an issue.

If Nintendo ever ends up updating the Wii U to support two GamePads though, it’s something to be aware of if you’re traveling. Either way it’s an odd find, and I’d be interested in hearing a justification for it.