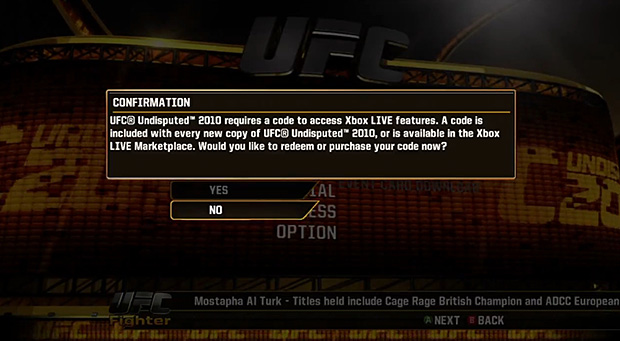 Ubisoft isn’t the only publisher that’s implementing a program similar to Electronic Arts and their EA Sports Online Pass. According to sports gaming blog Pastapadre, THQ is beating EA to the punch by two weeks. Tiger Woods PGA Tour 11, which launches on June 8th, will be the first EA Sports game under the EA Sports Online Pass. But THQ’s UFC Undisputed 2010, due out next Tuesday, May 25th, will also come with a one-time-use code on the back of the game’s instruction manual, and players will need to type in the code if they want to play the game online (as you can see above).

It’s essentially the same idea as the EA Sports Online Pass. If you buy UFC 2010 used or rent it, you’ll be prompted to purchase a code from the Xbox Live Marketplace or the PlayStation Store. We’ve pinged THQ for comment, since there’s no word yet on how much a code will cost, or if there will be any sort of free trial period (like the 7-day trial that the Online Pass offers). As soon as we hear back, we’ll update this story.

I guess we’re going to have to get used to this stuff.

[Update: We’ve just received an official response from THQ; you can check out the full statement after the jump. Here’s the takeaway: codes for non-new buyers will cost $5 (400 Microsoft Points). There’s no mention of a trial period, so it looks like renters will have to pony up to try the game online.]

The official statement from THQ regarding online play in UFC Undisputed 2010:

THQ is delivering a truly unmatched online gaming experience for fans of UFC and across all fighting games in general. The main enhancement of UFC Undisputed 2010’s premium online content is the new “Fight Camp Mode” in which players can assemble ranks of up to 40 people and train together. This is a significant value-add to the game as players can continually improve their skills by training with their friends and bringing teams of MMA specialists together.

This multiplayer content for UFC Undisputed 2010 will be available via a one-time code included with the game at purchase. Codes for accessing the content will be available for second-time buyers for an additional $5.

Details for acquiring the codes and how this will work will be available via the UFC community site.

Well, there you have it. Keep your eyes on the UFC Undisputed community site for further details.