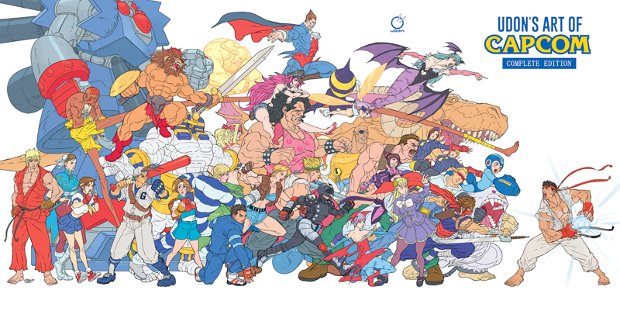 Who wants an electric punch? Please gather around Dean

Like the WWE, Capcom has been around long enough to have history that spans several distinct eras. They may be in the “all our old fans hate us but we still put out some good games sometimes” era now, but in the ’90s, they were deep into the “Street Fighter II made us more money than God so let’s keep making games that focus on fun and bold art and design” era. It was an era that spurred a multitude of art books, and with them, the futures of many of today’s most popular artists. Top names like Joe Madureira, Corey Lewis, Mariel Cartwright, and many more cite Capcom’s ’90s era artists like Akiman, Bengus, and Kinu Nishimura as some of their biggest influences.

Those days may be long gone, but Udon has done their best to keep the home fires burning with their own Capcom-powered artwork. Their latest collection gathers from their 10+ years of collaborating with Capcom on games and comics into one massive tome. Even better, the Sandiago Comic Con special edition features a wrap around cover by Joe Ng that pays tribute to Kinu Nishimura’s classic Capcom Design Works cover from days of old. It features such hot commodities as Dean and Lucia from Final Fight 3, the squid-guy from Red Earth/Warzard, and that time Akuma was a robot in the Japan-only Saturn port of Cyberbots: Full Metal Madness.