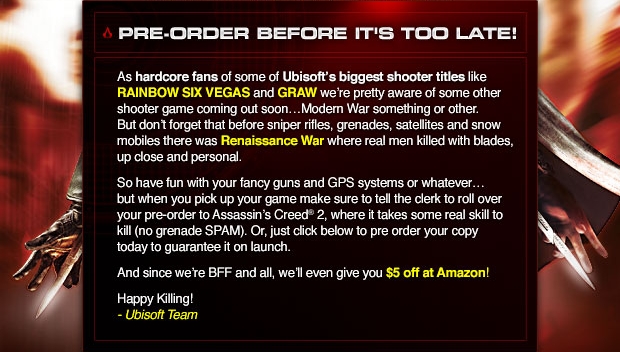 So, a big game came out over the last few days, set in modern times where men fought men using guns, grenades and gillie suits. But Ubisoft knows better, because REAL men made Renaissance Warfare, using blades, knives and pointy objects on each other.

Those sentiments were reflected in Ubisoft’s latest newsletter, encouraging “shooter fans” to “kill with skill” and preorder Assassin’s Creed 2. To sweeten the deal for their “BFF” newsletter subscribers, the letter came with an Amazon.com promo code that knocks $5 off the game’s preorder price. As of this writing, that price is $55.99, already $5 less than retail.

Ten bucks off for a preorder, not bad at all. Just check the image in the gallery for the code, then enter it during the Amazon checkout process.

[Thanks for the tip, Tylor!]