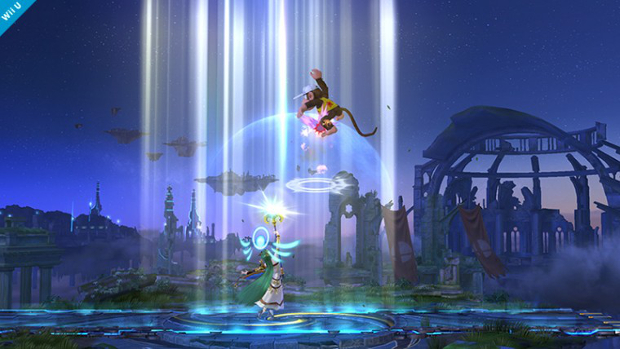 ‘Guarded’ optimism from a couple of masters

Yesterday I wrote an article about why I’d like to have the option to turn on tripping in Smash Bros for the Wii U and 3DS. It upset a lot of people. Sorry, guys.

One part that some people found particularly insulting was inspired by this interview with Mew2King and Aramada, two of the best Smash Bros players in the world. When asked if there was anything they’d change about Smash Bros 4, Armada stated that “…landing lag was a bit longer than in previous Smash games, so after you land an aerial you can’t move as fast afterwards. An improvement could be to reduce some of the lag to make the characters move faster, which also would mean that you could use a lot more aerials while playing.”

Mew2King agreed, stating “I completely agree – the landing lag is definitely the number one thing. Kirby in this game seems pretty good with the landing lag – there’s some lag, but it’s not very significant. I think if more characters went a similar route to how Kirby plays, like with his down air or back air, the game’s tension would be increased. I would also add directional influence, which is where you can control which way you get hit by using the control stick. But if there’s one thing that matters above all, it’s definitely the landing lag.”

They may be right. We’ll lave to wait and see before we find out how bad the landing lag is for the majority of characters, and how much it bothers the majority of players. Still, doesn’t the fact that these two amazing players are put off by a slight delay in how long it takes to get back into the action after landing make them sound… a little obsessive? Obsessed with being in control of their characters, impatient during even a split second before they can move again, and always hungry for more tension?

I don’t know how anyone who doesn’t have the tendency towards being an obsessive, adrenaline-loving, “impatient control freak” could ever become an expert at Melee. If you don’t love the rush that comes from quickly and efficiently executing total control over your character, you’re not very likely to get that good at the game. Maybe a better way of saying the same thing would have been – “These days, Melee attracts a lot of people who thrive off constant action, where the player has seamless, immaculate control over nearly every aspect of player movement.”

Or maybe it was better to just say “impatient control freaks”? It’s certainly a lot shorter. What do you guys think?