Hospitals have always been a major part of my life. I was born with a rare skin disease that goes by many names but the one I’ve most heard it referred to as is Giant Congenital Nevus. In layman’s terms, the disease is an over pigmentation of the skin, like a mole, but covering a great deal of my body. My strain of the disease is a particularly bad one. It’s in my blood, and I have an increased risk of developing melanoma because of it.

Growing up, I was in and out of hospitals as doctors worked to remove the nevus from my body. I became frightened of going. By the time I reached my teens, I only associated hospitals with pain, blood, tears, misery, and my screams as nurses pulled the gelatinous bandages from my back. I still get a shiver up my spine anytime I smell cleaning products that remotely resembles what was used at Seattle Children’s all those years ago.

Consumption of media set in hospitals helped me get over a majority of my fear. ER and Scrubs were required viewing for me. One of the few games our family computer could run growing up was Life & Death. Those shows, that game and everything else that came after allowed me to see hospitals for what they actually are, not what my infantile nightmares convinced me they were.

Now, I kind of like hospitals, and as I learned during a recent hands-on session with the upcoming Two Point Hospital, I absolutely love making my own. 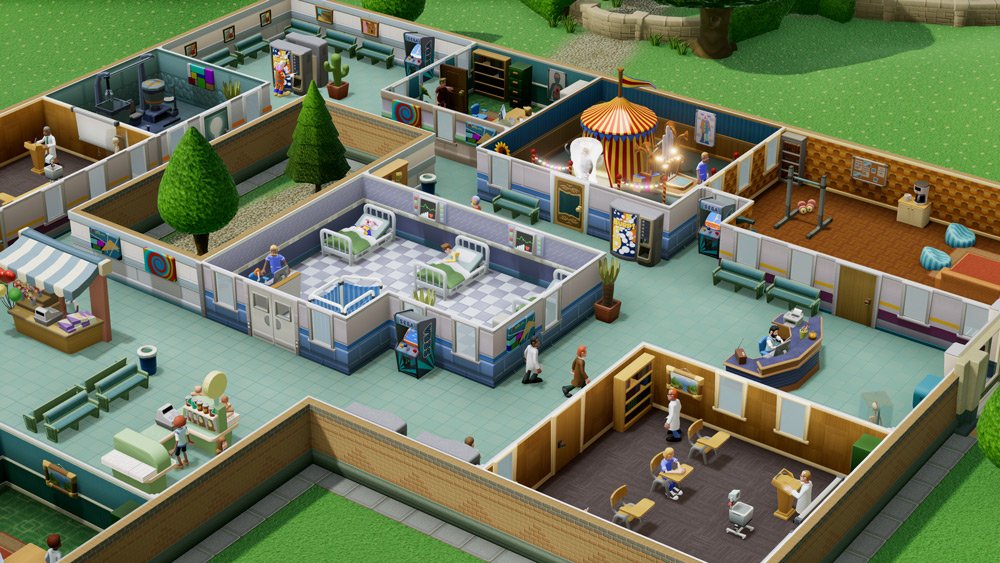 Two Point Hospital takes place in Two Point County, a location developer Two Point Studios hopes will be the home of many future games. This management sim is the successor to the classic Theme Hospital and Gary Carr and Mark Webley, a few of the creators of that original game, are on board at Two Point to make this game a reality. The developer has just 16 employees, but there are decades of experience among them. Some of the past titles members of the team have worked on include Black & White, The Movies, Populous, Startopia, and the Fable series.

Mark Smart is the lead artist at Two Point Studios and he was able to give me some insight into the development of the title. Two Point Hospital has been in development for around 19 months and progress on the project has been relatively problem-free, something Smart attributes to the experience of all those involved and their ability to communicate. Of course, as the lead artist, the subject Smart had the most to say about was the brilliant art direction surrounding the wild cases that will come into your hospitals.

“It was quite a bit of fun,” he said. “We’d start off one of two ways: we’d either have the name, or a terrible pun, and work off that, or we’d start without the name and just fancy whatever ideas popped into our heads. Like a cubist guy. We’d think of that and then try to figure out how he gets cured. For instance, the ‘lightbulb head’ disease idea came before the name. We thought it’d be funny for a guy to have a lightbulb where his head should be. The original name was something like ‘Bulbous Head,’ but then somebody came up with the name ‘Lightheadedness.'”

Lightheadedness was one of two visually unique illnesses that found their way into my hospitals. The other was the Pandemic, an amusing ailment that caused pans to grow out of a patient’s head. To help cure them, I needed to build a slew of different rooms to accommodate their needs. Two Points Hospital‘s interface makes constructing these different areas a snap with obvious prompts, simple-to-visualize requirements, and a layout that’s impossible to get lost in. 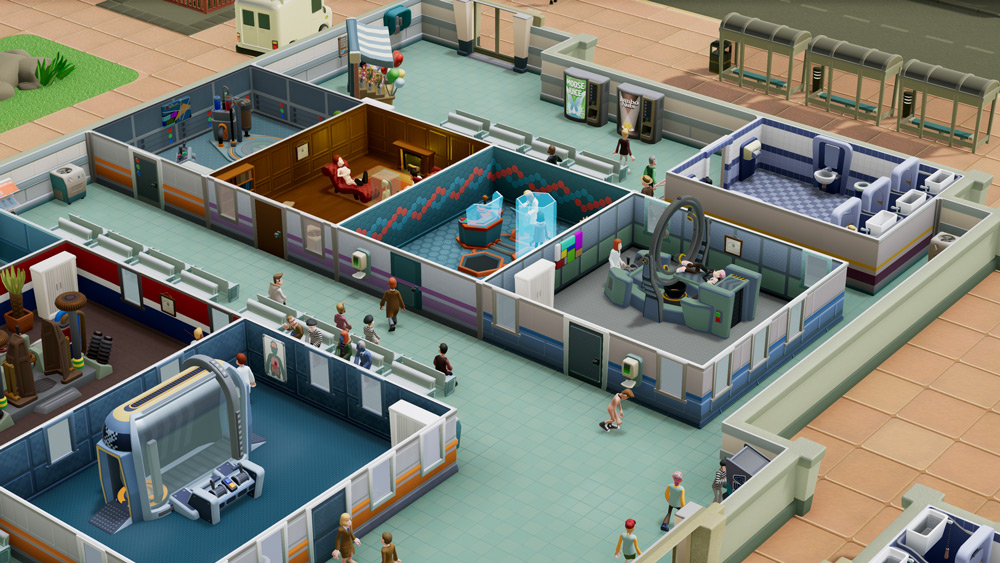 During my hands-on session, I am able to try out the first two hospitals in the game. There are well over a dozen to unlock and the further players progress, the more options and challenges they’ll have to account for. Some hospitals start small, but we’ll be able to buy up land around them to expand our footprint. The first hospital is more of a tutorial. I’m shown the basics of the game, how to build rooms, how to hire help, and how to keep things from catching fire. I play simulation games on my iPad every night, so this is all second nature to me. This first hospital is simple enough to manage without worrying about budget issues, and, in roughly 20 minutes, I’m rewarded my first star and able to move onto the next facility.

Each hospital will have a maximum three-star rating to achieve with the requirements for each location laid out plainly for players. I only need to achieve a single star rating in each hospital to unlock the next, a design Two Point Studios hopes will encourage players to return to hospitals from the early hours of the game, utilising the new knowledge they’ve gained over time.

The second hospital, Lower Bullocks, is slightly more complicated. It adds new ailments and a new treatment type: Psychiatry. Now I can’t just hire any doctor, but doctors who specialize in mental health. This is in addition to my standard practitioners, my nurses, my pharmacists, my janitors, my clerk and everyone else I need to keep my facility running. The 20-minute video below was captured during my playthrough of the second hospital and should give you an idea of how the game operates.

You might have noticed that more than a few patients dropped dead on my hospital floor. Don’t worry, when it came time for the annual hospital awards, I still took home the award for the safest hospital. I’m not sure if that’s a bug or if all the other hospitals are just really bad. Either way, during my session there was one nasty bug I came across that restricted me from building any rooms. It’s a bug most of the team hadn’t seen before, but was easily solved with a restart of the game.

I left my appointment wanting more. Two Point Hospital isn’t the most exciting game I’ve demoed recently, but I’m not looking for excitement from management sims. I want easy-to-understand mechanics, fluid animation, a steady stream of goals to achieve, and an inviting interface. Two Point Hospital has that in spades and I can’t wait to play the final product when it launches for Windows PC on August 30, 2018.