When it was announced at E3 earlier this year, I had a chance to play a small bit of Chair Entertainment’s and Epic Games’ upcoming Xbox LIVE Arcade title, Shadow Complex. Only a small demo, it wasn’t enough; I wanted more. After  seeing Dale’s interview with Chair’s Donald Mustard, I knew I couldn’t wait much longer.

So after some pestering and a bit of begging, Chair Entertainment passed along to me some preview code of Shadow Complex. So far, I’ve spent about two hours with it; one hour, 55 minutes, and 45 seconds to be exact, according to in-game stats.

It’s been quite an adventure, and so far I’ve…

No doubt, Shadow Complex is a damned big game, its progression taking obvious cues from the titles that influenced its design — Metroid and Konami’s exploratory Castlevania titles. So far, almost two hours in, I’ve only uncovered 33% of the game’s world map.

Keep in mind that doesn’t mean I’m 33% towards completing the game… just 33% exploring its world. To put things into perspective, I’ve also only picked up 21% of the game’s items. To be more precise: three of eight health upgrades; one of ten armor upgrades; and 11 of 30 grenade packsand two each of the game’s “Gold Bars” and “Passkeys,” and I don’t even know what the hell those things do yet.

The game also tells me I’ve found zero of 20 foam packs, as well as 0 of 20 missile packs. No loss — I don’t have the foam gun yet, or the ability to shoot missiles. Yet. Do want. 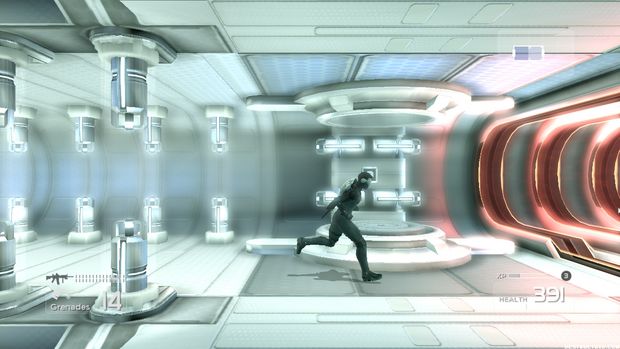 This includes gun and rocket wielding soldiers, as well as giant mechs and robots in some of the most insane firefights of any side-scrolling action-platform. And maybe that includes the plane I took down within the first five minutes of the game. I’m not too sure.

Depending on how you look at things, 291 could seem like a low number. Battling through two or three small sections Castlevania: Symphony of the Night might rack up a similar body count in a fraction of the time, with its never-ending supply of skeletons, bats, and annoying flea man guy. But unlike that game, baddies don’t respawn. In Shadow Complex, the enemies are placed deliberately and carefully in each room, with your entrance triggering tight, intense sequences. Once the room is clear, you’re not likely to face opposition if you simply leave and return.

[Update: To clarify this a bit, clearning a room and then immediately leaving only to return right away will not result in enemies respawning. Since Shadow Complex does have back-tracking in its exploration, returning to old areas will find you facing enemies. Sorry for any confusion!]

It should also be noted that a huge chunk of that body count came from a sequence in which I mounted a turret. While the game is normally tied to an old-school, 2D-style platforming control mechanic, this was an exception. After pressing the action button to control the gun, the camera shifted to an over-the-shoulder third-person perspective, giving me a different view of the action and allowing me to target and gun down soldiers as they poured into the area. It was a surprising change of pace; so far it’s only happened once. 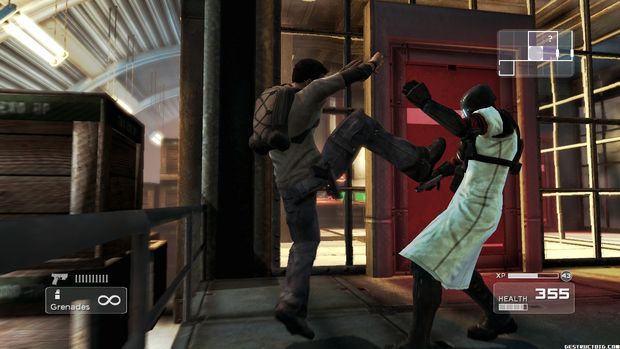 …learned the joys of underwater breathing

While you start off Shadow Complex with nothing more than a flashlight to light up darkened areas, it’s not long before you start picking up other pieces of equipment. The first is “Climbing Gear,” which gives you the ability to wall jump, grab ledges, and sprint. These actions are your main methods of getting around, later augmented by a Thrust Pack, which allows you to get to higher ground with limited boost jump ability.

But so far, my favorite piece of equipment has to be the “SCHCA Mask,” which allows you to breath under water and explore more of the world map. It’s not what it can do that I loved so much — what game doesn’t have underwater breathing these days? — it’s what it allowed me to see, and how it was presented.

One of the first areas I entered wearing the mask was a flooded industrial room. As I dipped my head underwater, a calm and haunting piano piece began to play, bodies and other wreckage floating around me. The scene stood in stark contrast to everything I had encountered prior to this moment — big explosions, the gunfire, the robots. It looked gorgeous, even surreal, a great and subtle moment in a game where I didn’t expect to find one. 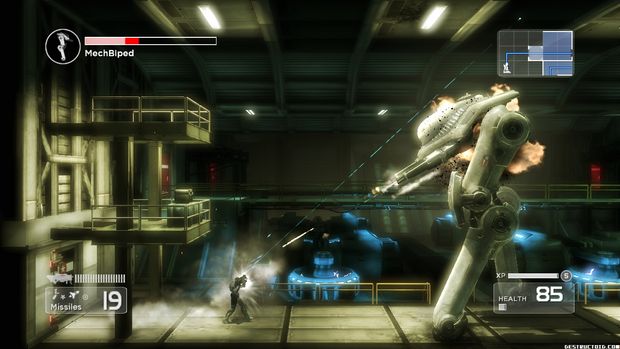 Just about everything you do in Shadow Complex earns you experience points. Kill an enemy, get a little. Explore an area of the map, get a little bit more. Kill a boss or a find a pick-up, get a lot. Nail a head shot, find an bosses weakpoint, eke out some more.

So far, I’ve upgraded to level nine, which translates to +3 each to my Stamina, Accuracy, and Precision. I’m told a “major upgrade bonus” awaits at every 10 levels. This pleases me; I like surprises. 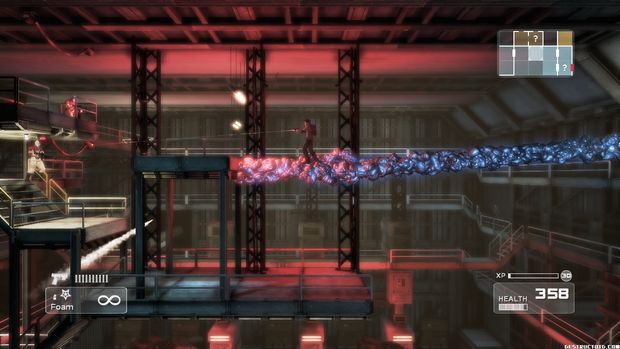 During my play session earlier today, I suddenly realized I was hungry. No… starving. I had forgotten to eat lunch. But I’m so close to level ten, and I’m pretty sure I’m close to getting the Foam Gun. Lunch can wait.