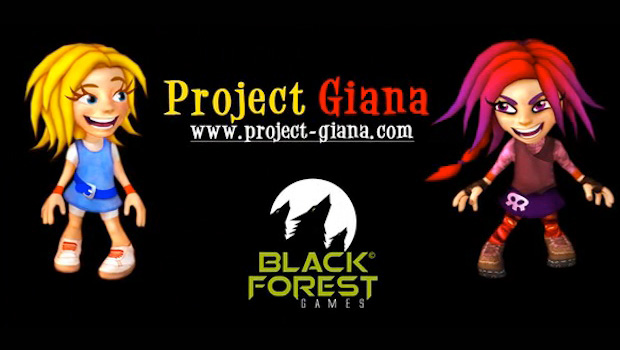 At the tender age of four I sat in my best friend’s basement playing her brother’s Commodore 64. My friend, a girl, enjoyed watching me play, and offered me a challenge: beat any game, and she’d kiss me. My game of choice was Great Giana Sisters, a blatant Super Mario Bros. clone with a unique quality of its own.

After the trial, I received my kiss, but more importantly, I beat Giana Sisters. The game left its mark on the videogame world for its excellent graphics and charming soundtrack by Chris Hülsbeck, one of the great pioneers of videogame music.

Giana Sisters remained popular enough to warrant a remake on the Nintendo DS, and the team has since reformed as Black Forest Games. They’re finishing up production of a all-new title codenamed Project Giana, planned for release on PC, Xbox Live Arcade, and PlayStation Network.

As shown above, players will be able to jump between the game’s light and dark worlds at the touch of a button with Chris Hülsbeck and Swedish heavy metal band Machinae Supremacy (known for their C64 arrangements) scoring the light and dark worlds, respectively, allowing the music to seamlessly change from Hülsbeck’s charming melodies into the energetic sound of Supremacy.

BFG is asking for help from fans via Kickstarter to fund the development of the final portions of the game and to be able to self-publish the title, otherwise there’s going to be a longer wait until they accumulate more resources. Pledges of $10 will land you the game itself on launch day, while art books by designer Pikomi and soundtrack CDs are available to those who wish to pledge even more. If the project reaches above 300k, an OYA version will also be made available, if you believe in that console.

Any Great Giana Sisters fans out there excited about this project? Can anyone believe it’s been 30 years since the Commodore 64 launched?