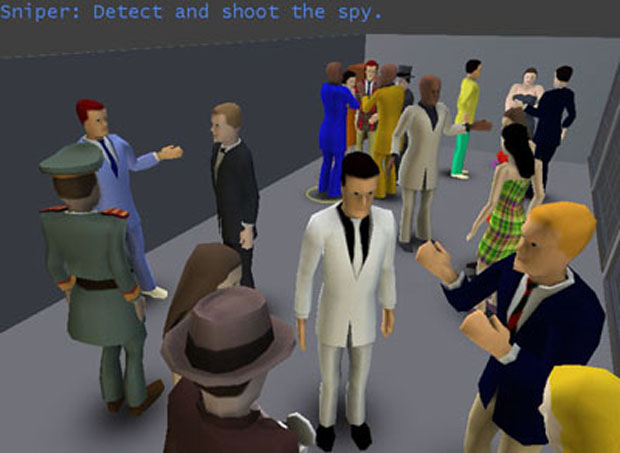 Remember the guy who said “The way you manufacture a Wii is you take two GameCubes and duct tape. It’s not clear to me that Nintendo gives a sh*t about gaming as an art form“. Yeah, that was Chris Hecker, and he just got laid off from Maxis. Ironic, as he worked on the original Spore, and Spore: Heroes is just about to make it’s way to the Wii. Maybe Nintendo demanded his head on a stake, to be barbecued atop a pile of burning money, before they would allow Spore to take its place in the Wii’s library? Yeah, probably not.

Even more ironic is the fact that he’s now going indie with a game called SpyParty; a game that looks like it’s running on two TurboGrafx-16s scotch-taped together!

All hilarious comedy aside, the game sounds interesting, and I have to give Hecker credit for going indie in this economy. Still, I’d bet dollars to donuts that he’s looking everywhere for jobs as SpyParty comes together. I just hope Chris doesn’t plan on going to Nintendo for work. I’ve got a feeling that their inabiliy to “know sh*t about gaming as an art form” just may keep them from appreciating Chris’s body of work.

Filed under... #Cooler than the other side of the pillow#News