Fellow Destructoid editor Tony Ponce and I are in love with recent Nintendo DS game Ghost Trick. Like, obsessed. It is easily one of our favorite games of the year.

The other day, we were talking about how great the game is over a rather enthusiastic e-mail thread. We both shared our favorite moments; we both laughed about how great all the characters are. And then, as two guys sometimes do, we completely bonded over how much we adore one character in particular: a Pomeranian named Missile.

For people that have played the game, I can only assume you are excitedly nodding your head in agreement. And for those of you who have not yet played Ghost Trick … MY GOD GRAB A COPY RIGHT NOW SO YOU CAN EXPERIENCE THE MAJESTY THAT IS MISSILE! Seriously. He will change your life.

Since we figured sharing such unbridled enthusiasm is never a bad thing, hit the jump to view our e-mail correspondence. Two dudes talking about how much they love a cute videogame puppy. It doesn’t get any manlier than this.

*** It goes without saying that there are UNBELIEVABLY MASSIVE SPOILERS BELOW! Please proceed with caution. *** 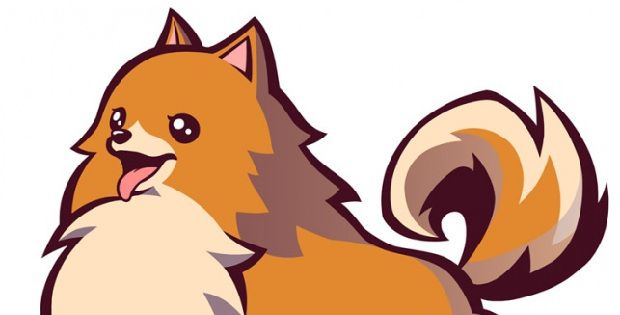 Chad Concelmo: Last month I wrote a post called “The ten best videogame puppies EVER!“. At the time, I hadn’t played Ghost Trick, but, no joke, about half of all the comments on the post mentioned Missile. Everyone said I was ludicrous to not include him on the list. I couldn’t respond with my “I HAVEN’T PLAYED GHOST TRICK YET!” replies fast enough.

But, now that I have played (and loved!) the game, I totally understand what people were saying. Missile is awesome. I seriously am in love with that cute pup.

Tony Ponce: For those of you who have yet to play Ghost Trick (and don’t mind some major spoilers), you take play as a recently departed spirit named Sissel who must use a bevy of paranormal abilities to solve the truth behind his murder and how he connects to the game’s overarching mystery. Along the way, you meet many unforgettable characters such as a smooth-talking police inspector with serious Michael Jackson moves and a romance-intrigue novelist with hair shaped like rose petals.

One of the earliest characters you meet is Missile the Pomeranian, the loyal companion to our female protagonists Lynne and Kamila. Unfortunately, he’s already dead when we first meet him. 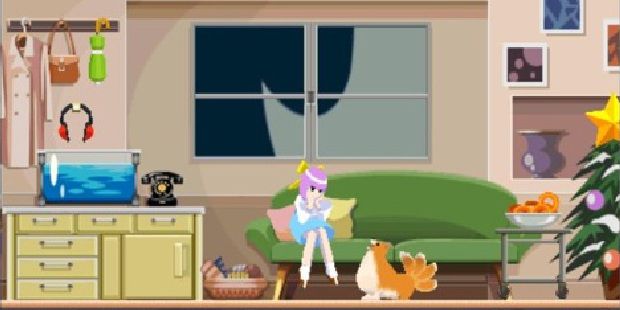 Chad: As a huge dog lover, I was overjoyed when I met Missile. HE IS SO ADORABLE! But then I kind of freaked out when I saw him get shot in the face and killed right after he was introduced. That really kind of traumatized me. I mean, seriously. PEOPLE SHOULDN’T SHOOT CUTE DOGS IN THE FACE!

But once you make everything right again I felt much better about the situation. And communicating with Missile in the spirit world is an absolute joy. Missile has so much personality, and, for a dog that gets shot in the face, quite the positive attitude!

Tony: I absolutely love how naive about the world he is! He can’t stand the black “Hello!” because every time one of his mistresses picks it up, she ignores him! When he meets a stranger, he just wants to bark a lot and welcome him! Instead of trying to grasp the nuances of human lifestyles and activities, he just tosses up his paws and says, “I’m a Pomeranian! What do I know?”

But he loves his mistresses, and understands life and death enough to know that it’s his duty to protect them at all costs. Even from beyond the grave. That’s loyalty.

Kinda reminds me of a reverse Hachiko. Isn’t Missile like Hachiko, Chad? 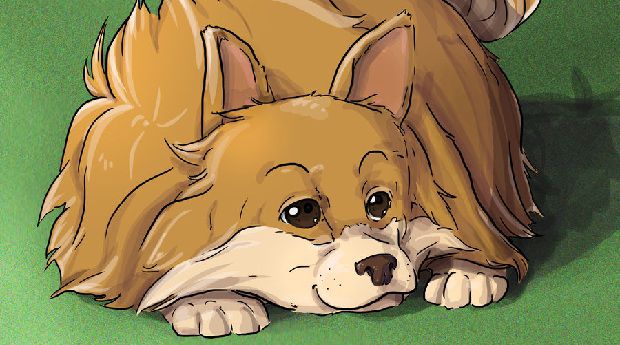 Chad: Oh my gosh, you did not just pull out the Hachiko card. Do you want me to start crying right now? Seriously. I am totally getting emotional. Hachi is so amazing.

But, yeah, Missile is like Hachiko. He is such a loyal pup, but obviously not nearly as mellow as Hachi.

At first, Missile is kind of this quirky dog character that you obviously love, but don’t think he will factor into the story as much as he does. He just feels like another one of the many quirky, memorable characters that pops up in Ghost Trick.

But as the game goes on, you start to realize the major role Missile plays in the story. There have been many other dogs in many other videogames — some that even serve as important companions (Secret of Evermore comes to mind) — but never has a dog felt so complex and vital to a game’s plot. It really is such a refreshing thing to see in a videogame. It makes me laugh to think back about some of the long, important conversations my main character had in the game … and how many of these conversations were with a cute puppy. It’s absurd. And once you find out the even more major twist about who Sissel really is at the very end of the game, those conversations feel even more absurd. Awesomely absurd, but absurd nonetheless.

But looking past the amazing role Missile plays in the story, the part that really took me over the edge (outside of the game’s grand final reveal) was when Missile actually joins you in your mission and becomes part of the gameplay. Once you have to alternate control between Sissel and Missile to solve the game’s puzzles I was ridiculously impressed. And they both have completely unique powers! Working together with Missile adds such wonderful variety to an already stellar game.

The more I think about Missile the more I genuinely miss him. It has been a long time since I have fallen that in love with an in-game videogame character.

How about you, Tony? Did you fall more in love with the character of Missile himself? Or were you more impressed with just the simple fact that Missile — a Pomeranian — is featured as one of Ghost Trick‘s main (and most important) characters?

Tony: Missile is one of those characters in a work of fiction who explodes beyond the creator’s expectations. In Destructoid’s interview with series creator Shu Takumi, he expressed hope that Sissel would have a lasting impact on players, joining the ranks of Capcom icons like Mega Man, Ryu, and even his own Phoenix Wright. Much to his surprise, it was the support character Missile who was the big crowd-pleaser. Every Ghost Trick impression I’ve read has heaped tons of praise upon Missile, and it’s clear to see why after playing the game.

All the characters have their own little quirks that make them memorable. For me as well, Missile was lovable right from the start, but so were most of the others. My love went into overdrive precisely because of how his role expands.

What makes Missile so special is how the game plays with your expectations. He starts off as just an ordinary house pet. After Sissel rewinds time and prevents Missile’s death, Missile races out after Kamila to protect her from future harm, but not before comically bonking his head against the apartment door for several minutes trying to get it to open. You watch this scene, giggle, remark “what a cute doggie,” and then move on.

Missile bites the big one a second time halfway through the game, but this time he possesses ghost powers that rival Sissel’s! Sissel can manipulate inanimate objects, but Missile can swap objects of similar shape no matter how large or heavy they are and he has a longer reach than Sissel! On top of all that, he too has the power to turn back time!

At this point, Missile is no longer a support character. He’s not just the stalwart canine companion anymore. He’s not Rush, called upon every now and then to help Mega Man cross a particularly perilous chasm. He’s not Red XIII, who doesn’t seem to fit alongside real warriors like Cloud, Barret, and Tifa. He’s officially one of the major players.

Unlike other games with animal protagonists like Star Fox or Banjo-Kazooie, the world of Ghost Trick is more or less the real world. In the real world, animals are sadly not awarded much significance. A house pet as a hero? Who is this, Underdog? But he is!

Just imagine how awesome having a time-traveling, fate-altering ghost puppy would be!

Chad: I couldn’t agree with you more about why Missile easily became the fan favorite. Everything you said is spot-on. He is such an adorable, loyal, brave character that it is impossible to not fall in love with him. I would even argue he is one of my favorite characters ever created by Shu Takumi. And this is the guy who created both Ghost Trick and the Ace Attorney series, games filled with a ridiculous amount of memorable characters!

What did you think about the ending? When you found out that Ray was actually an older version of Missile, were you surprised? Not only was I shocked to find this out, but when they showed the image of an older, graying Missile, I may have cried a little bit. Seeing that brave little pup instantly turn into an old, wise, even braver dog was a highly emotional revelation for me. Having a dog of my own whom I love very much did not help the situation. Missile was so fleshed out and likable that he started reminding me of my own dog Luna. Seeing Missile dramatically aged at the end of the game made me think of my own dog and what she will look like when she is much older. This moment killed me, because I can’t even imagine what my life is going to be like once Luna is not a part of it.

Damn, I can’t even type this without wanting to cry.

It’s crazy that a dog character in a very fantasy-heavy game has the power to affect me this much.

Damn you, Missile! WHY DO YOU HAVE TO BE SO AWESOME?! 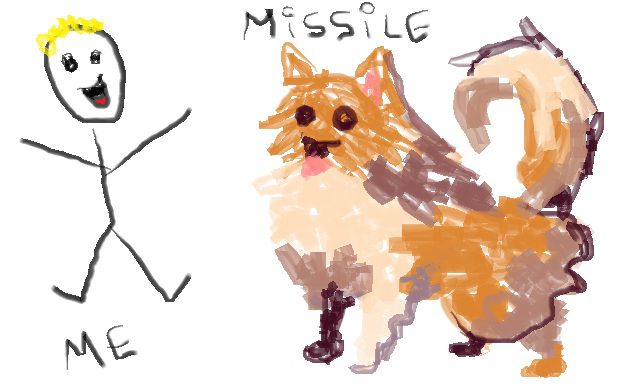 Tony: Now you are making me choke up! And I don’t even have any pets!

The “Ray is Missile” revelation is mind-blowing on multiple levels. I mean, he’s indirectly responsible for how every major event in the game turned out. He saw how that one night played out, watched all his loved ones die without his having the necessary skills to reverse their misfortunes, and then went back in time ten years. With his prior knowledge, he was able to determine the best course of action for Sissel to follow, but he had to remain as a spirit for ten years to do so! Talk about patience!

Speaking of patience, ten friggin’ years! The average Pomeranian lifespan is about 12 years. If you figure that Missile was only a year old or so before at the start of the game, that means he spent quite nearly his entire life waiting for the opportunity to undo a single night’s misfortune. Even though he’s a ghost, it would appear that a ghost’s powers dwindle around the time its natural life would end. This was his final mission before he passed on. 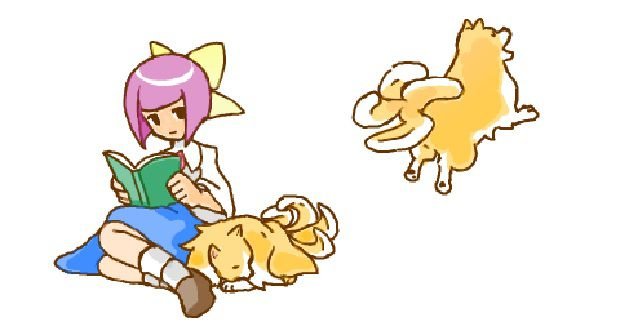 Chad: This post just went from “Two dudes talking about how much they love Missile” to “Two dudes crying”.

And I am fine with that.