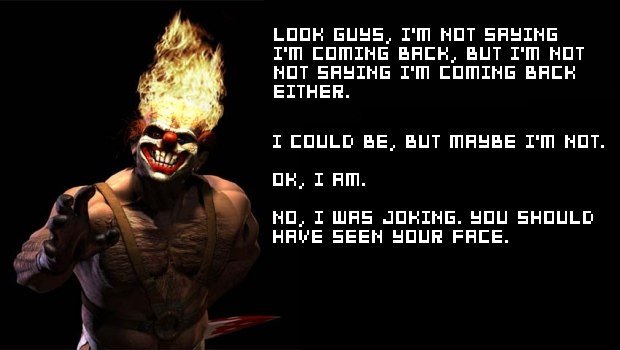 A new Twisted Metal has been rumored forever now, and hinted at and kind of directly referred to by David Jaffe himself. It’s one of those terribly, terribly kept secrets and Jaffe is probably the biggest culprit in hinting at the game. As we know, he likes to talk. Speaking of Jaffe talking and letting info about Twisted Metal slip, here he is entirely not confirming and not describing what the next Twisted Metal game is not going to be about.

“Just to be clear, I’ve never said we were or were NOT making a new Twisted Metal. Ever,” he states on his blog. “But just to be 100% clear, if we were to make a new Twisted, I would consider it a reboot. The last console Twisted was 10 years ago. If we were to make a new one, we’d be starting with the assumption that no one knows what Twisted Metal is anymore and we’d have to re-earn each and every fan the series ever had. So in that sense, IF we were to ever make a new one, we’d consider it a brand new series/game/franchise.“