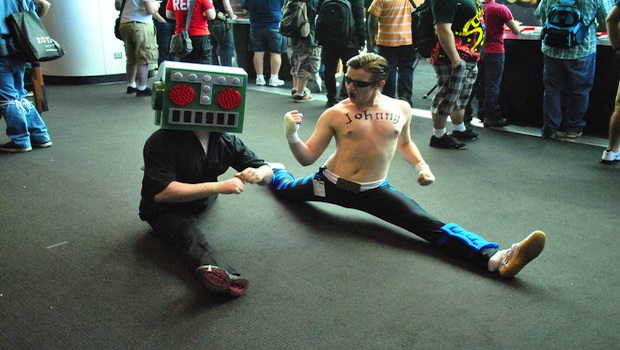 PAX East was completely bonkers this year. There was a marked decrease in big publisher representation, with Microsoft showing strictly old stuff and Nintendo and Sony bowing out completely. The indies more than made up for it though. In past years there were relatively distinct boundaries between the Indie Megabooth and the rest of the show. This year, it was like the Indie Megabooth was the entire show. It just didn’t seem to end. Even when you ventured into booths run by relatively large publishers like Cartoon Network, Adult Swim Games and Devolver Digital, it was still all indie stuff.

That was a good thing for plenty of reasons, but more than anything, the heavy indie presence this year meant for more games at the show overall. In the space that would have normally been taken up by ten kiosks for the new Mario game, we got the likes of Kero Blaster, Woah Dave!, Not a Hero, Tetropolis, Mushroom 11, Y2K, Max Gentlemen, Mewgenics, Videoball and so many more.

This made it impossible to see everything at the show, but we tried anyway. That’s how we ended up with 30 interviews this year, conducted over a day and a half. The video we have here with Bounden, the Twister+Sonic+Ballet game, with hunky developer Adriaan de Jongh (Game Oven) and starlet Caitlin Cooke, is the last of those interviews. We did our best to see everything, but we failed. I was so excited to interview the developers of A Hat in Time, Treachery in Beatdown City, Hotline Miami 2, Transistor, Gods Will Be Watching, Actual Sunlight, and all the rest, but it didn’t happen. Still, the playlist above should give you something of an idea of what it’s like to try to meet every available game developer at PAX East 2014, so that’s better than nothing.