PlayStation 3 owners who are fans of twin-sticks shooters should already be familiar with Housemarque’s downloadable shooter, Super StarDust HD. With Super StarDust Delta, we may just be looking at the best version in the series yet.

Delta plays as you’d expect, using both of the NGP’s sticks which provide controls as accurate as you’d get on a DualShock. Of course, the developers will also be supporting NGP-specific features to make it a unique experience on the new handheld. 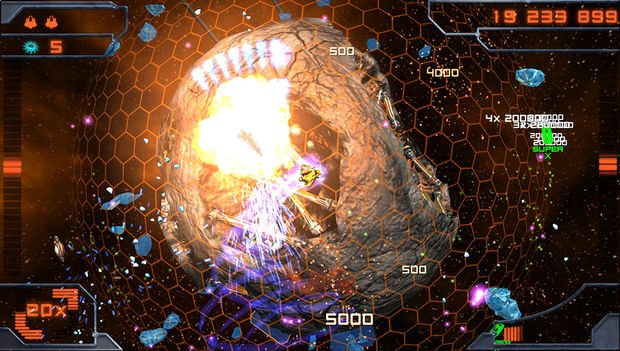 First thing you’ll notice is that by tilting the NGP slightly from side to side, you’ll be able to get a better view of the world sphere, moving the camera to see what’s on the horizon. Weapons also now have secondary fire modes by using the touch screen. With the fire laser equipped, I tapped the screen to draw enemies into a black hole; the ice lasers secondary fire unleashed a swarm of missiles that shot out in every direction.

There were even new gameplay features that are being implemented that weren’t in the early build I played. For example, you’ll have a “shockwave” attack that’s activated by shoving forward or shaking the NGP.

Just want a great Super StarDust experience on the go without all of this newfangled touch-screen and gyroscope baloney? Purists will be able to stick to traditional controls, with all of the new gameplay features mapped to the NGP’s buttons.

While it will borrow some features from HD and the PlayStation Portable version of Super StarDust, Delta is being pitched as an all new game. This means new planets, new enemies, and “at least five mini-games” that will look to take advantage of NGP features, including the back touch panel.

It’s unclear whether Super StarDust Delta will be a full retail title, or part of Sony’s NGP PlayStation Network line-up, but its expected to be available at launch.