$300 is a lot for a pair of headphones. It’s a little easier to swallow when you add in wireless functionality, as most headsets tend to teeter around that number in the current market. Many savvy consumers will tell you to just go wired, get a long cable, and deal with it for $100 with a quality studio headset — and those thrifty people would generally be right.

But a few years back I purchased a wireless set on sale (SteelSeries H Wireless), and I still use it to this day. It’s very convenient, and in a lot of ways Turtle Beach’s wireless Elite 800X tops it.

The 800X is currently a big deal because Microsoft has made it very difficult for headsets to work on Xbox One without an adapter. In fact, this pair doesn’t even need one. That may change sometime after E3 if the publisher unveils its new controller design, but for now, and with all of your old pads, the 800X will work out of the box. In terms of the design, I never really dug the green color scheme on Turtle Beach sets, but the actual feel of the headset is more than sufficient. It’s sturdy and feels snug, but not uncomfortable, and I could wear it on my head for hours at a time without feeling the need to take it off. Still, there’s no goofy lights or weird designs if you’re worried about using them in public.

My most efficient test had to be The Witcher 3: Wild Hunt on Xbox One. Everything from Geralt’s movements and the ambiance of the game world was heard loud and clear, and the incredible score sounded amazing on the 800X. One thing that takes a lot of getting used to is the buttons. There are the typical channel settings (equalizers), mute buttons, and such on the sides, and they’re really easy to touch if you’re just brushing your head or have your hands anywhere near the cups. They’re far too sensitive and I didn’t even realize I was hitting them at times, but eventually I started to become aware and it wasn’t as big of a deal.

As for online gaming, I tested it out recently on Call of Duty: Advanced Warfare, and it was pretty much perfect. For those of you who don’t game online with headphones, it definitely gives you an advantage, as you can hear footsteps in games that have that feature (like Call of Duty). When I started using headphones regularly back in Black Ops, I got in the habit of taking the Ninja perk, where your footsteps were silent — I didn’t even hear them before.

As for chat, the microphone is hidden, which is a give and take design. 90% of the time it worked well and everyone could hear me, but over time my headset would shift as I moved in my seat, and it would get in a slightly worse spot. It’s not broken or anything, it’s just that your voice is going to be lower in volume occasionally, which isn’t a dealbreaker in my mind. This pair also has a noise cancellation feature, which I would often try when my wife was doing something else in the room. It’s not quite “isolation,” but it works well enough — at least, far better than I expected it to, which is not at all. 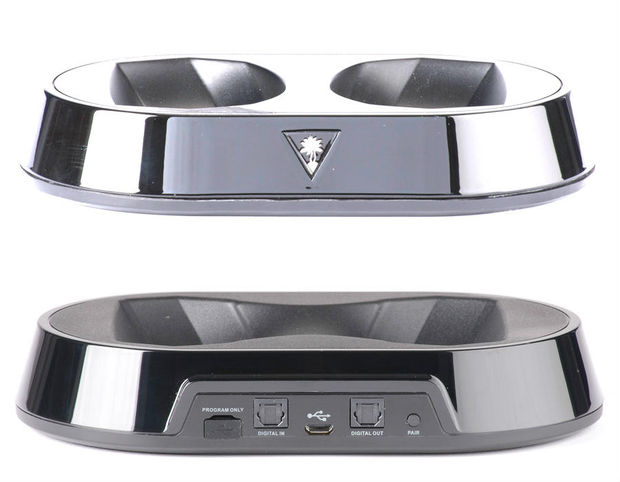 The only bit I didn’t particularly like about the 800X is the charging cradle. While the aforementioned SteelSeries H Wireless set has a tiny transmitter box that is used to charge its battery. You get two packs, so one is always used and the other is constantly charging. With the 800X, you are not only forced to charge your headset by docking it, but it takes up a lot more space due to the fact that you need to store the cradle and the headset on top of it.

I have a sectioned TV stand, and since I don’t have the height clearance for it, I have to take the cradle out and place it on the floor to charge. The battery itself lasts 10 hours (which is accurate based on my testing) — long enough for most people out there. As for myself, during a long review session I had to plug it in and go wired for a little while, charging it via micro-USB.

This is also a standard headset (despite the “Xbox One” branding), so you can just pop in a standard 3.5mm audio cable to use it with anything. I ended up plugging it into my iPhone 6, PC, PS4, and iPad with no problems, and it even has Bluetooth support — just note that you cannot chat with it on PS4 or PC (unless you follow these instructions on the latter), a huge caveat. Again, full price for these is tough to swallow, but I like to own at least one pair of wireless headphones at any given time in case I feel like being lazy. If I was going to pick up another pair, it would probably be the Elite 800X.