From the creators of The Bridge

The first impression of a game matters a lot at PAX. If people aren’t intrigued almost immediately, they may never play the game at all. My first impression of Tumblestone was “oh cool another match-three game.” I don’t play many of them, so I barely had any interest.

However, knowing that Tumblestone and The Bridge, a brilliant indie puzzle game, share the same developer, I just had to give it a chance. Thank goodness I did, too, because it was easily the most intelligent game on the show floor. 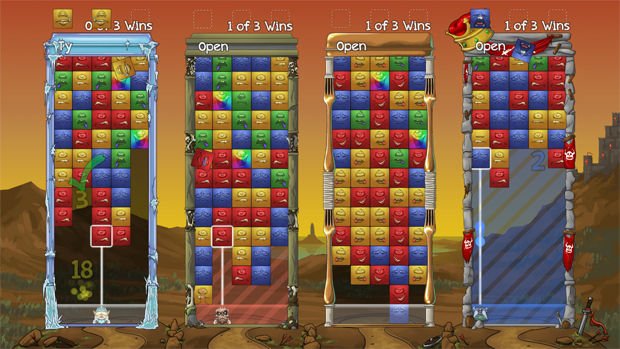 Tumblestone contains both single-player and multiplayer modes. I spent most of the time in the multiplayer mode, which was the most interesting balance of speed and wits that I have seen in a long time.

The idea behind the game is to clear the board of the colored blocks. To do so, the player needs to shoot three of the same color from the bottom of the board. So far, everything is pretty straightforward. However, doing this in the wrong order will result in no possible matches after a while, which then forces the player to reset the board and try again. Yes, it is important to be fast, but it is more important to be correct!

In multiplayer, everyone has the same randomly generated board. From there, it’s a matter of who can clear the blocks in the right order the fastest. This is possibly the only game of its kind that made me, in a competitive multiplayer match, stop and stand back to really think about my next move. I could hear other players rushing to remove blocks while my section of the screen was motionless, yet I wasn’t panicking, just concentrating.

Things only get more complicated when different variants get thrown into the mix. Wildcards, for example, add in multicolored blocks that can go with any color. However, each color needs to use one Wildcard in order to clear the board, so the player must then keep track of which colors have already used Wildcards and which ones haven’t. Ty Taylor, the developer, said he wants to make it more obvious to the player as to which colors the Wildcards can be used with to reduce the stress a little.

Another interesting modifier was Color Lock, which restricted the same color from being matched up back to back. Though it sounds simple, the puzzle layouts make it quite complicated. The Shot Blocker modifier throws a stone in the middle column that switches on and off with each shot. Knowing this, players need to plan out their shots accordingly, since pieces in the middle will not be available every other turn.

Perhaps my favorite modifier was a more complicated version of Shot Blocker, though I can’t recall the specific name at the moment. The mode placed a Shot Blocker in the column the player uses for three consecutive shots. So, if a player takes a match from columns one, two, and three, those become off limits after their respective shots. However, the fourth shot will remove the first Shot Blocker placed and move it to the column the fourth shot was in. If it sounds confusing, it is! But only at first. This mode really forces players to think ahead, and “speed” almost becomes an afterthought in this mode. There were even times where I forgot I was competing against other people right next to me!

Each modifier forces players to think completely differently, and aren’t hard to understand. After a few failed attempts, most players will realize exactly what’s up and start going very methodically. Ty also mentioned that future builds may be able to mix modifiers together, which I don’t even want to think about right now.

A sense of progression quickly becomes noticeable. While at first I felt a bit overwhelmed by some of the game modes, it didn’t take long to become acclimated and start churning out victories. It’s a pretty great feeling to know where you messed up in a puzzle, then breeze through the first half only to stop and think three moves ahead before diving into the second half. 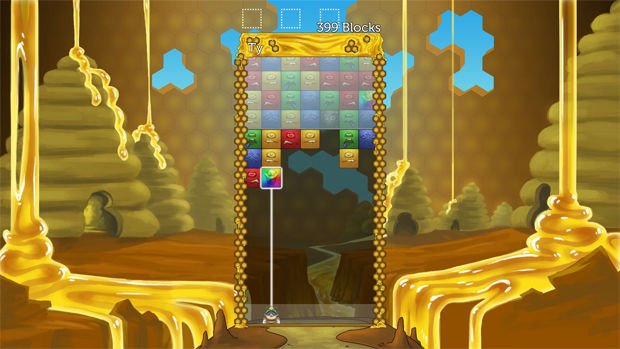 My time with the single-player components was limited, but there are plenty of options for those who will be going it alone. A Marathon mode is an untimed, infinite mode for those who want to go for high scores. A Story Mode is also included, with 360 puzzles in 12 worlds, each world introducing a new modifier and likely pushing that modifier to the limit.

Oh, and for those curious, Tumblestone is just fine for red/green colorblindies like myself. I was worried at first, but not only does each color have a specific face on it, but the reds and greens are at a very different brightness (dark red and light green) and were easy to tell apart. In addition, choosing a wrong color to match with in multiplayer will bring up arrows pointing to possible correct options.

Both the single- and multiplayer offerings in Tumblestone come off as incredibly substantial modes. The competitive multiplayer got really heated on the show floor, even with occasional pauses to go into a deep, zen-like thought. This was one of my favorite games of PAX East, and luckily it’s headed to just about every platform out there later this year!