I’ve never been much of an online RPG player, so when I first heard about Trion Worlds’ Trove I didn’t think I’d be interested. But hearing about it and playing are two completely different things. Standing out among the other offerings around it at PAX South, was this brightly colored game that a lot of kids seemed to really dig. In fact, one little girl didn’t want her dad to pull her away from it.

After getting some hands-on time with Trove, I can definitely see why.

Trove‘s main draw is jumping into its large world and personalizing your own little corner of it. Once you leave the main hub, your character jumps into any of the procedurally generated worlds and you’re able to customize it at your leisure. Taking cues from titles like Minecraft, a player could remove blocks from the side of a dungeon for an easier way in or build a stack of cede blocks to reach an unavailable area. There are 14 or so classes available, each with their own sets of unlockable perks, but I spent most of my time using the Candy Barbarian and Neon Ninja classes because of their hilariously cute names.

Since the bulk of the focus is based on exploration, the rest of the game feels a bit simplistic. While it was super cute to be a ninja riding around on an iguana, and then use one of my unlockable skills to turn myself invisible, there really wasn’t much else to do with it. I ended up in this dark world type of area and fought some baddies, but they were all brought down in one or two hits of my sword. Granted, given the random nature of the worlds and dungeons, I could’ve had a more base experience than what’s usually offered but these battles left a little more to be desired. Without interesting battles, there’d be no point in trying to level up your character and unlocking armor and skills if you don’t really get to do anything substantial with them. 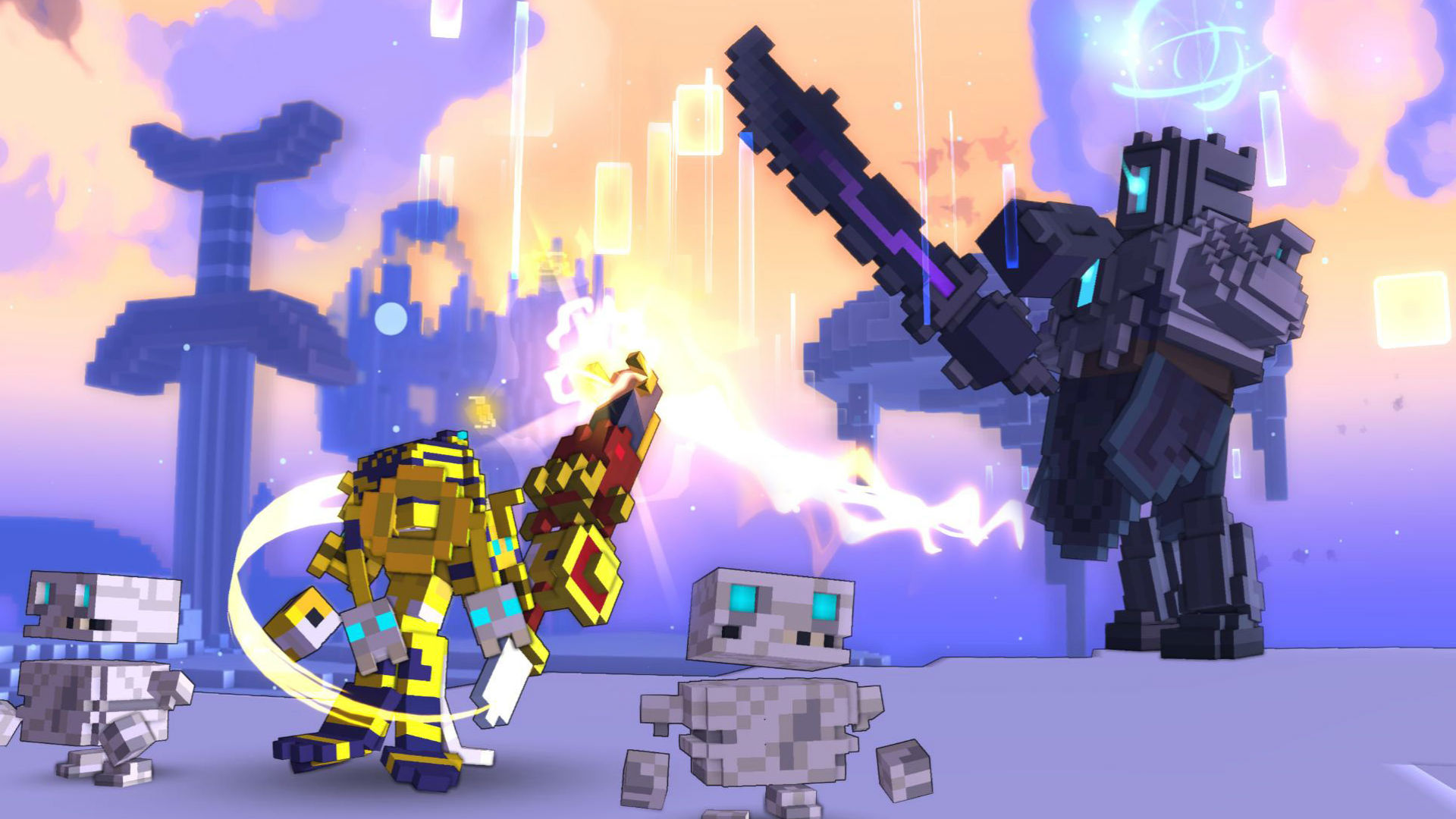 But while the battle system might be simplistic, it’s hard to deny how much of an appeal Trove’s customization has. My barbarian (with two axes and pink mouse ears) looked nothing like the little girl’s I had seen earlier. And my ninja might have been riding an iguana, but I saw another player riding around on a tiny dragon. This customization further extends to the explorable worlds with Cornerstones. A Cornerstone is essentially Trove‘s base-building mechanic where you claim a patch of land (any area that’s grayed out and features a post with a question mark in front of it) and are able to customize it at your leisure. You’re allowed to take your Cornerstone into whatever world you wish to, as well as use it as a respawn point if you found yourself in a sticky situation. Now here’s where Trove can potentially get addicting.

Although each Cornerstone has a limited width, each player has a great deal of height and depth to mess around with. For example, I dug deep into my Cornerstone just because I could. But other players were in the midst of crafting their Cornerstones into giant towers or faces. Though resources are limited, and the materials available while I was playing also felt a bit restrictive, I could see why someone would dedicate a hefty amount of time to get their Cornerstone exactly how they wanted. Since Cornerstones are susceptible to enemies (but not other players, thankfully enough). there’s also a need to build in defenses. But while this was all cute and fun, I couldn’t shake the feeling the “free-to-play” aspect of Trove would rear its head soon enough. 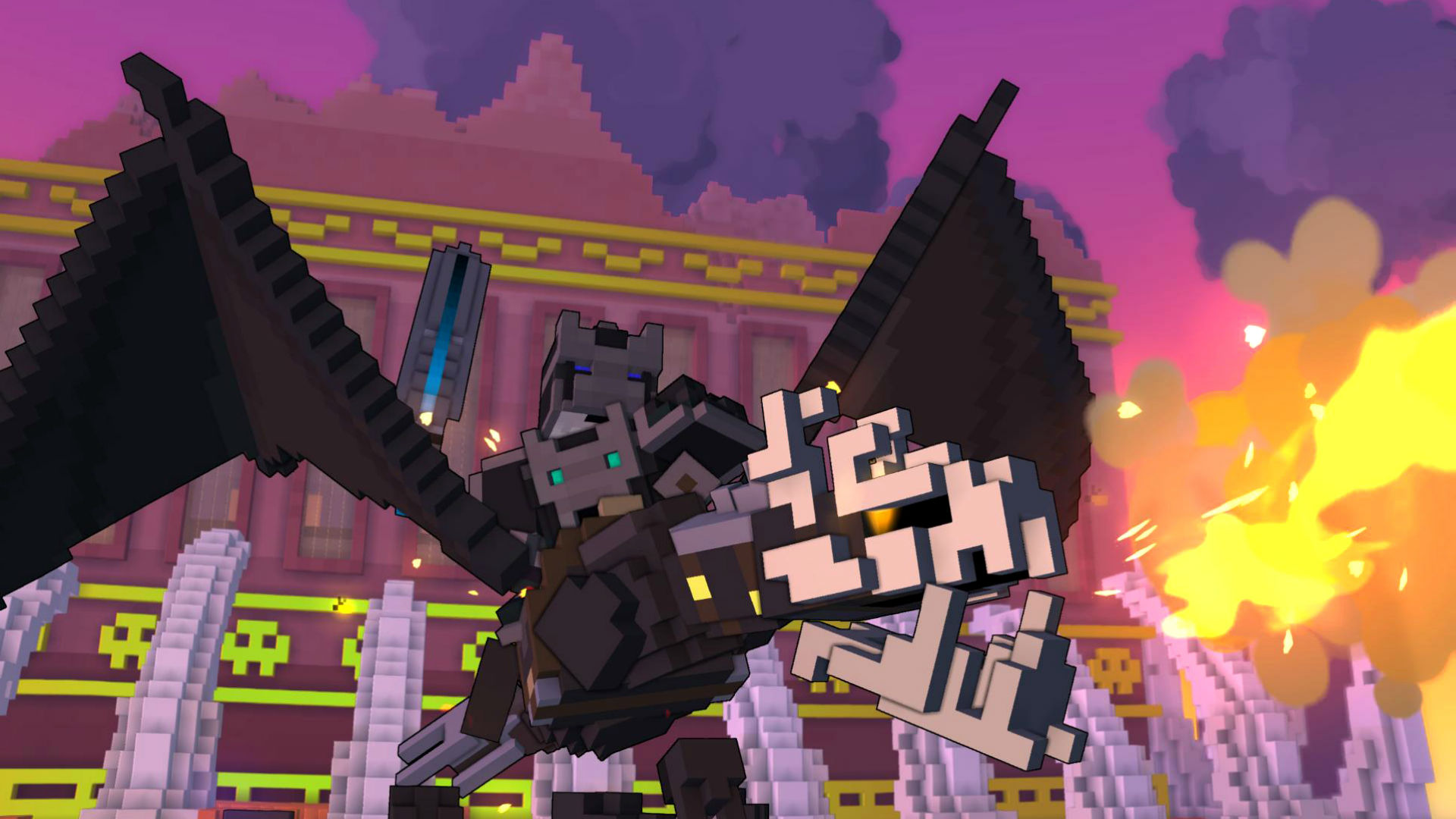 Trove is indeed a free-to-play MMO and with the PAX South offering it was hard to discern how much of my unlockable skills or customization items would be locked behind a paywall. Although Trion Worlds assured me that players would be able to unlock things on their own, I could see a kid somewhere getting impatient with the admittedly simple battle system and trying to pay for better Cornerstone options or cool dragon mounts.

But if you’re willing to put the time in and love having the ability to to build your own corner of the world while occasionally fighting (in a limited capacity) some baddies, Trove has a lot to offer. Trove is available to play now for PC and Steam. It also has a downloadable beta version on PlayStation 4 and Xbox One with an expected launch patch to match it to the PC version later this year.