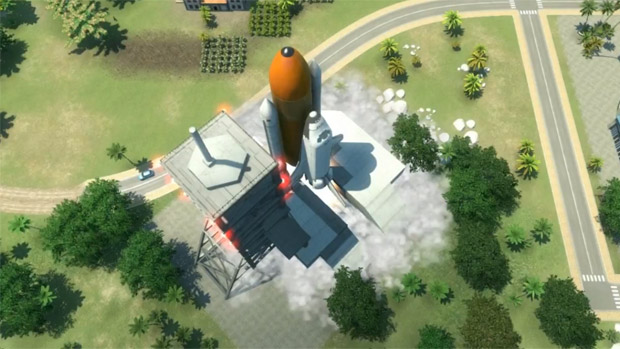 Ola El Presidente! There is more Tropico 4 goodness on the way, as Kalypso has announced an expansion to the popular banana republic sim: Modern Times. The new expansion will focus on taking your economy to the 21st century of global financial markets, space exploration, and the rise of the Internet. You can expect new buildings, challenges, and edicts that let you do things like limiting Internet access for Tropicans.

Modernizing your island across 12 new scenario missions, you’ll upgrade old buildings to new variants and replace obsolete buildings with modern ones. Hopefully the upgraded buildings will be about the same size as the old ones so you don’t have to create an entirely new layout for your city. Tropico 4: Modern Times will be released this March on both the PC ($19.99/£19.99/€29.99) and Xbox Live Arcade (1200 Microsoft Points). I’m not sure why it is cheaper on XBLA, but perhaps it’s to make up for not releasing Tropico 3: Absolute Power on the Xbox 360.

If you missed Mash Tactics earlier this week, catch up on Jon and Wesley playing Tropico 4 on Twitch TV.