All that and a bag of chips

I’d be convinced Jazzpunk was made by some actually-talented, alternate universe me, for me, if I didn’t meet and chat with one half of its creative team, Necrophone Games’ Luis Hernandez, for myself.

It’s a first-person joke box riffing on some of my favorite themes. An-Airplane styled goof that delivers its jokes with both panache and clinical deadpan. It’s smart, clever, and zany, but not above putting a whoopee cushion on your chair. Literally.

Even in the games I’ve seen that have managed humor well, few as there are, I’m not sure I’ve ever played anything quite like this. It’s hard to codify my feelings on the game because I have so many different feelings on so many disparate elements of it, albeit all of them resolutely positive. The colorful, cartoonish cyberpunk affair is the weirdest amalgam of some of my favorite things: noir, jazz, Blade Runner. The over-arching spy theme feels appropriately like secret agent parody Get Smart, given the comedic parallels between Jazzpunk and the indelible Mel Brooks.

You begin in an office building, making your way to a waiting room. On the table is a spread of assorted magazines, including Reader’s Digestive Organs and its feature article, a black market price guide. Little gags like this abound.

Your handler gives you your mission in a cramped, back office. When he’s through, he tells you he’ll be in the wine cellar and disappears behind the desk. Upon closer inspection, he is passed out underneath of it, with a hilarious, gurgling snore. The surreal nature of the game helps its oddball comedy land. If you read the prescription bottle of pills that you need to take to start the mission (and you should always read the bottle), it notes: “take one capsule every mission, or until reality if sufficiently augmented.”

Suddenly, I’m tasked with breaking into a Russian consulate to steal secrets and jokes are flying toward me at terminal velocity. The first time I played the first level I stayed on the straight and narrow, following what I thought to be my weird, but sensible narrative goal. The level is littered with sly jokes and references; a nearby movie theatre was playing The Big Sleep Mode. The next mission, an Asian-themed jaunt on a dark night, had little pieces of origami strewn about the way. Clearly Blade Runner-inspired. 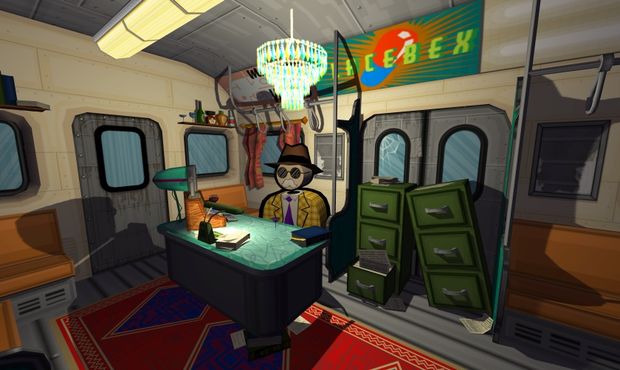 When I replayed the level and made a point to explore every nook and cranny outside of the building, I was treated to a whole new world of joy and surprises. Jazzpunk is all about interacting with your environment. And it even makes fun of that. Inspecting a suspiciously lone box prompts, in a garbled non-sense language, it to respond, “I’m just a box, leave me alone.” Inspecting some garbage triggers a rain of confetti and the text, “Congrats, you’re the 1,302nd player to smell this garbage.”

An NPC asks you if they have crumbs on their face and you use a comically large 2D hand on a stick — index outstretched — to wipe them off.

Somewhere in the level you can discover a hidden pizza sidequest that transports you to an eerie locale in which the floor and everything else is textured with pizza, as you get accosted by pizza-textured zombies. It was somehow legitimately unsettling. It was also flabbergasting in its hilarity, as you dual wield a pizza cutter and a pizza paddle, slowing making your way to a cabin that looks similar to a Pizza Hut. Things just get better from there. I won’t spoil it. 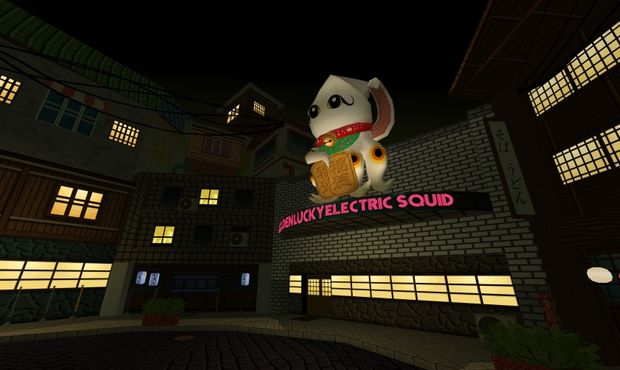 The second mission, after you’ve made off with the Russians’ plans, is to kill a sushi-loving cowboy in a Japan-town styled area filled to the brim, too, with sidequests and spiders to trap, though it is a much more linear level than the open first. It works just as well discovering jokes and goofs along a more structured path as it does finding them arbitrarily in an open space.

There’s also a discoverable, playable Frogger section and a recreation of Quake‘s arena multiplayer, but the setting is a wedding and the weapons are popped champagne tops and Gatling wedding cake and rose rocket launchers. Chronic reptile dysfunction.

Jazzpunk is hilarious. I laughed, out loud and on the regular, while playing. It’s goofy, it’s surreal, it’s incisive and impeccably timed. There’s also a segment that features the most puns per minute I’ve ever encountered and I was left with the most reverent silence after stifling my snickering. Given how badly some games have attempted to be humorous, it’s almost embarrassing the degree to which Jazzpunk outclasses them, and I’ve barely raved on about the superb music — plenty of jazz coupled with some hokey 60’s television camp influence — and delightful, colorful art style.