Songbringer exists at the intersection of nostalgia and innovation. Within the game’s pixels are millions of unique worlds. It’s The Legend of Zelda by way of Hyper Light Drifter, with one important distinction. Every player must input a six-letter code, which generates a dynamic landscape to explore.

Random generation and game-specific love letters aren’t uncommon in the indie space. Songbringer, with its overworld exploration and numerous dungeons, can be seen as developer Nathanael Weiss’ send-up to Zelda‘s oblique adventure. But despite player-seeded environments and a familiar structure, Weiss’ singular vision shines through in a litany of personal touches.

I had the opportunity to explore a single seeded world in Songbringer during the PAX East 2017 weekend. Playing as Roq, an unlikely and hard-partying hero, I set about exploring the alien land that spilled out before me. 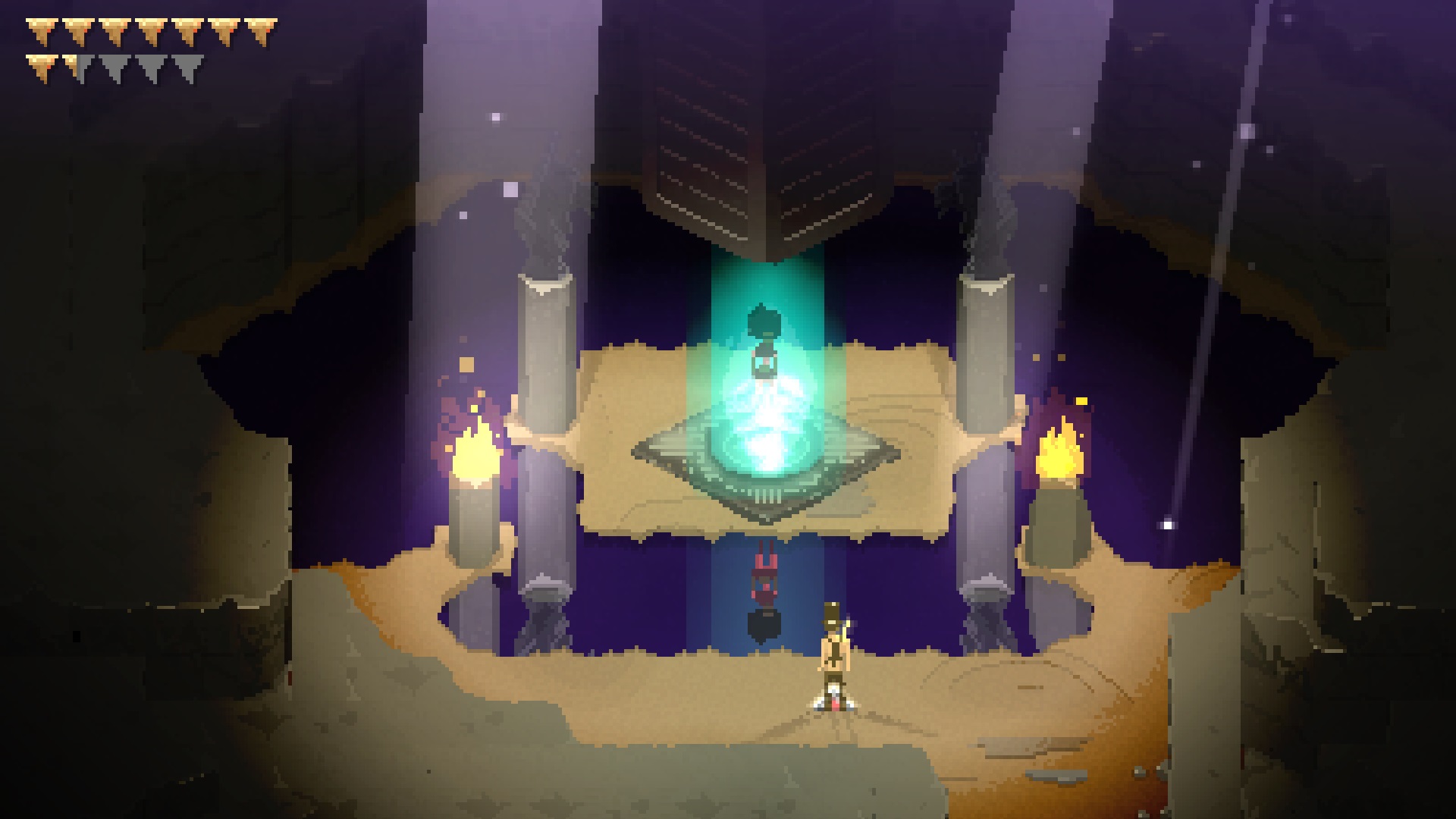 Roq and his floating robot companion Jib (who functions as a co-op player as well) are strangers in an even stranger land. I found myself thrown into a world of abundant vegetation and branching paths. According to Weiss, Songbringer is designed with nonlinearity in mind. In addition to the randomization that stems from seed-based world generation, each of the game’s nine major dungeons can be tackled in any order. The demo build I played had two such subterranean dungeons, each with bosses lurking in their depths.

But even with the pressing deadline of a scheduled meeting on the convention center floor, I didn’t feel pressed to dart for the dungeons straight away. Songbringer‘s world — at least the one that I saw — is full of strange creatures and mysterious architecture. There’s a sense of life and wonder that persists throughout the environment. I poked and prodded around each screen while using Roq’s abilities to search for secrets and hidden paths.

Roq can swing his sword at enemies, place bombs in the world, and throw his top hat with the press of a button. These offensive moves, combined with a short-range teleportation skill, make up the core skills at the player’s disposal. They’re standard action-adventure fare, but more than serviceable for both traversing the map and taking on any enemies that rear their heads along the way.

Where Songbringer stands out is its final key ability. Roq can acquire and eat strange cacti. Doing so unlocks a psychedelic vision, which alters Roq’s surroundings and reveals hidden treasures.

I didn’t think much of the crazy cacti at first. They seemed like a silly addition to a sci-fi adventure game that has a notable sense of humor. It wasn’t until uncovering a hidden dungeon towards the end of my demo that I became curious about the plants. 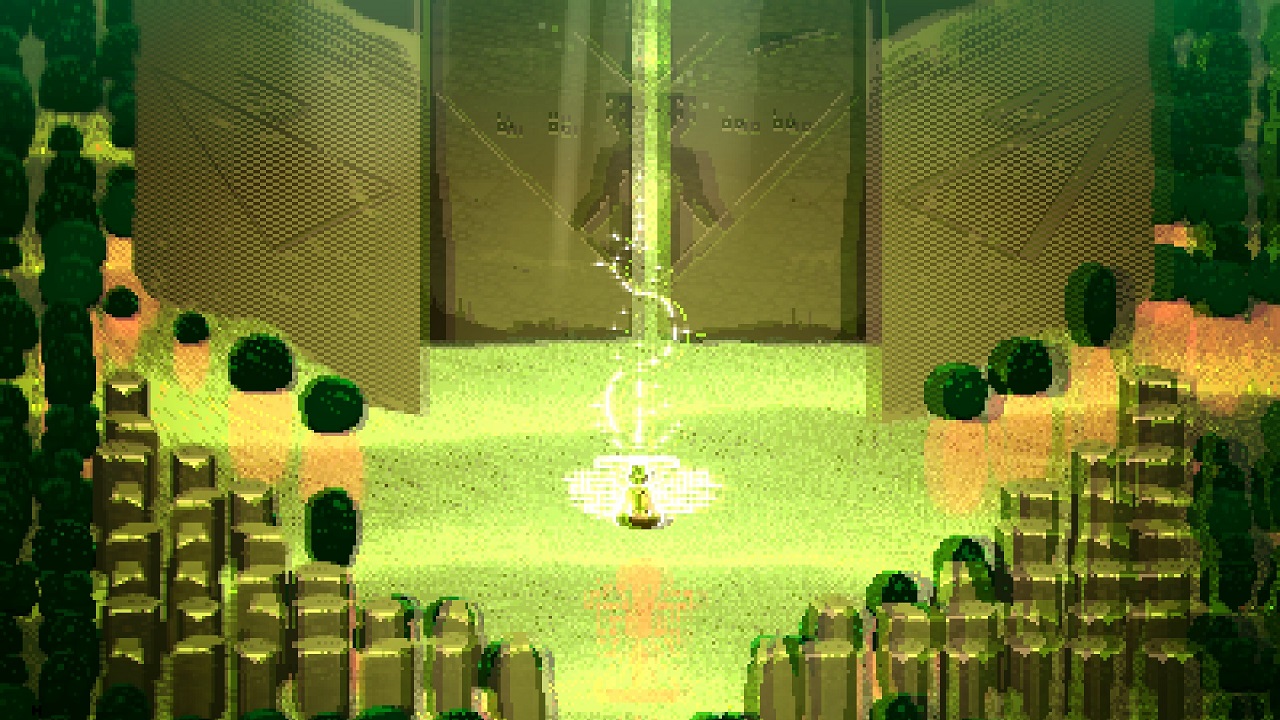 After falling into the secret dungeon, Roq awoke without his trusty sword. His path forward was obscured, so after a few failed attempts at brute forcing my way through the puzzle, I chomped down on a cactus. Weird colors and warped vision rewarded my decision, but I soon found a means of progress. I pursued a shadowy being who always seemed one step ahead of me until I made it to a towering gate. It was there that the shadow encouraged me to meditate and seek guidance for my journey. Sure enough, I found that Roq could cross his legs and meditate. After a few seconds of searching within himself, Roq found inner harmony and increased strength, both of which allowed me to exit the dungeon, sword in hand.

It’s not often that a game includes both trippy cacti and a meditation mechanic. The sudden inclusion of spiritualism stood out compared to the adventuring I had previously done. When asked about the features, Weiss shared the logic behind his decision.

“Mediation, cacti, marijuana, mountain climbing, LSD, and world travel are all things that have led to great growth for me personally,” Weiss told me in an email. “And I wanted to bear my soul a little with Songbringer.”

Considering that Weiss is the sole developer on Songbringer, responsible for the game’s design, art, music, and programming, it’s no surprise that his interests and beliefs would bleed into his project. What first started as a means to capture the wonder of 8-bit adventures has evolved into a personal means of expression.

“Roq experiences growth first through the cacti, then later through meditation,” Weiss explained. “…he comes to realize that [meditation] is more powerful than the cacti in many ways. It’s meant to be a subtle empowerment to the player.”

Weiss’ words give new meaning to Songbringer. After speaking with him, I looked back on my time with the demo and understood why both mind-expanding cacti and intense meditation play an integral role throughout the game. An adventure is nothing but a journey of growth, after all. For Weiss and the strange world of Songbringer, that growth comes from spiritual power.

With Songbringer‘s summer release on Steam, PS4, and Xbox One right around the corner, Weiss remains hopeful that its message will resonate. “I hope it causes players to be curious about meditation,” he said. “As [it’s] such a powerful tool for elevating our collective and overcoming the challenges we face today.”