If you’re making a Star Wars game with pilotable ships, I’m going to want to zip around Hoth in a snowspeeder and tie knots around some AT-ATs. I’ll also want to shoot down a bunch of TIE Fighters on my path to destroy the Death Star. We’ve performed these classic sequences time and time again in video games and, thankfully, Disney Infinity 3.0 is no exception. They’re still fun.

Disney Interactive and its stable of developers (Studio Gobo, Avalanche Software, Ninja Theory, et al.) are coming out with three separate Play Sets for Star Wars this year — one for the prequel films, one for the original trilogy, and one for The Force Awakens. The latter is still very much a mystery at this point, but we were able to briefly check out the former two sets during a recent pre-E3 event.

I gravitated toward Rise Against the Empire. It spans Tatooine, Hoth, Endor, and the Death Star. As for figures, there’s Darth Vader, Chewbacca, Han Solo, Luke Skywalker, and Princess Leia. 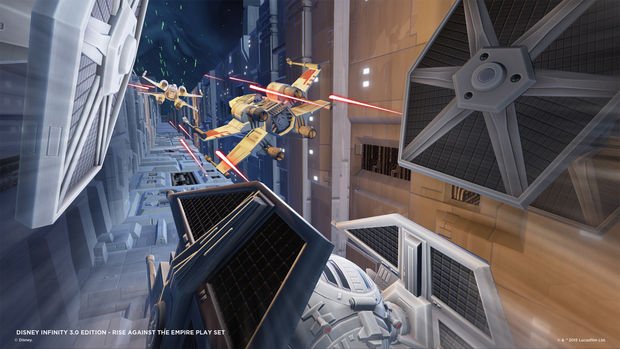 On Hoth, you aren’t restricted to a vehicle, so, if you’d rather fight walkers on foot, go ahead. I gave that an attempt and it’s indeed worth doing at least once. You smack at their feet to reveal weak points, then crawl up a leg to reach the machine’s vulnerable side and mash on it for a bit.

Do that enough times, and you can get up to the top of the AT-AT and kill the poor thing, or hop on several buttons to control its movement and laser cannons. It’s also worth mentioning that, like the rest of Disney Infinity, these guys are modeled like toys. Adorable, living toys.

Alternatively, you can pilot a snowspeeder. It’s the same old trick: launch your cable and fly around the AT-AT’s legs closely — but not too closely! — until it falls. There’s an on-screen prompt to indicate whether or not you’re in the sweep spot, which helps to avoid last-second screw-ups (I’m looking at you, Rogue Squadron). It was forgiving but not overly so. I had it down by my third try.

Hands-on time at the event was short, so I didn’t get to test out the Death Star level. But it’s about what you’d expect. The sequence is on rails and has plenty of obstacles to crash into.

Out of all the Disney Infinity 3.0 sets, I’d recommend this one if you’re only now trying these games because of Star Wars. The other Play Set, Twilight of the Republic, covers the Clone Wars. It looked all right. Maybe consider that one if you’re obsessed with Yoda and his crazy flip attacks.