Trion and SyFy have teamed up to produce the world’s first videogame and television show hybrid called Defiance. Defiance, the game, is a massively multiplayer online third-person shooter experience set for the PC, Xbox 360 and PlayStation 3. Defiance, the show, is a drama depicting humans and aliens trying to co-exist after a series of horrible events that brought the aliens to Earth in the first place.

Both the show and game will influence each other, with events that happen in the game evolving the TV series and vice-versa.

Defiance, the game, takes place in a reimagined San Francisco, where players can create their own character and fight with friends as they take on a variety of missions. Players will have access to a large number of futuristic guns, plus they’ll be able to equip different types of skills that will improve their combat abilities. One of these skills was a super speed ability that would make my character move twice as fast as normal.

Vehicles will play a big part of the game, too, and at any time you can summon an ATV that will teleport right in front of your character. The ATV has turbo boost, and your character can bail out at anytime. 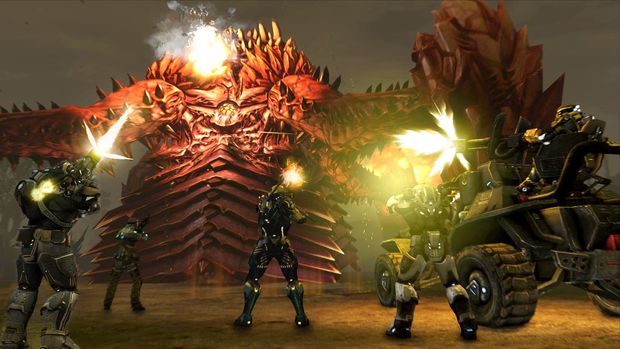 I was in a group of eight players or so and we took on a couple of small quests where we had to take out enemy NPCs. At one point a storm forms, indicating a special event was taking place in the world. Everyone in the group then had to merge at the target point and take out a giant worm-like monster. The creature was huge, and it’s a real group effort to take it down.

For the most part, Defiance is your pretty standard third-person shooter. If you’re not looking to fight with others, there will be a story you can just take on, with lots of side missions too. Trion wasn’t talking about how many players will fill the server yet as they’re still trying to figure what makes sense. Technically, though, they could get thousands of players going on one server.

Defiance didn’t look all that remarkable on the PlayStation 3 and Xbox 360, but it looked wonderful on the PC. Trion’s not yet talking about a pricing model either, but I’m hoping they adopt the free-to-play system. Granted, free-to-play isn’t possible on the Xbox 360 due to Microsoft’s restrictions, so it’ll be interesting to see what they do here. 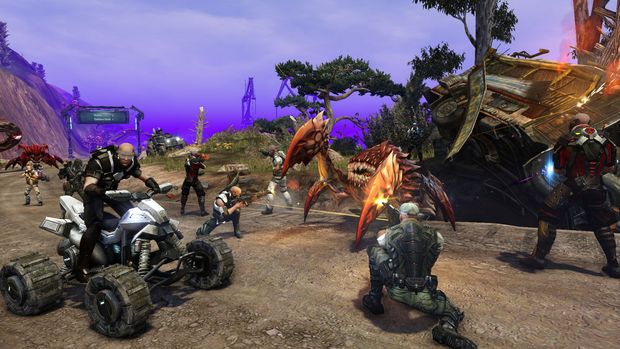 Defiance, the show, is a post-apocalyptic sci-fi Western-like drama and depicts life for humanity after an alien ship had crash-landed on Earth, causing the planet to get terraformed in the process. New plants and animals exist on the planet now, on top of a variety of alien races trying to co-exist with humanity.

The show will take place in a new St. Louis, built on top of the old one due to the disaster. It’ll largely focus on main character Nolan (Grant Bowler) who comes to St. Louis by accident and evidently ends up becoming the sheriff of the town. Other actors you can expect include Julie Benz, Jaime Murray, and Gram Green. On the production side, big names like Kevin Murphy, Rockne O’Bannon, Gary Hutzel and Scott Stewart will all be lending their talents.

The Defiance concept has been in the works for the last four years now, both aspects set to be very interconnected. Trion wouldn’t go into great detail on how players will actually influence the TV series through the events of the game, but there are some story elements that you’ll see described in both. For instance, Nolan from the TV show is actually a part of the game world and you see what makes Nolan leave San Francisco go to St. Louis. You’ll also see stuff like characters in the show talking about events that happen in the videogame. 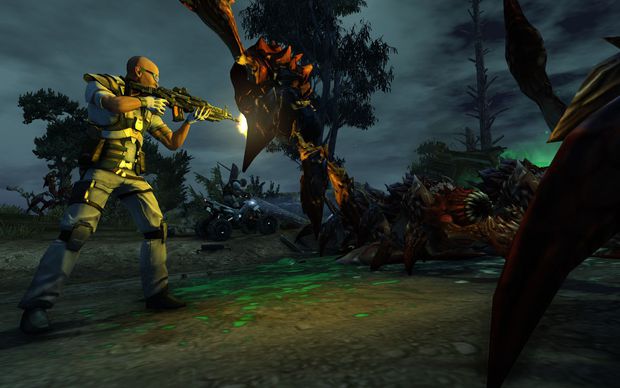 The entire concept of building a show and game together as one sounds really cool, but the game wasn’t anything that remarkable. Don’t get me wrong, it wasn’t bad, it just didn’t do it for me. The same goes for the show. Sounds neat, but I’ve been burned with too many sci-fi shows getting cut before their prime. Plus, what happens if the show gets cancelled?

Hopefully there’s more to Defiance then what was initially shown beyond this hook tied to a TV show.