If Trials HD somehow wasn’t able to break you, don’t act surprised when RedLynx is able to finish the job with Trials Evolution. The former remains one of my favorite Xbox Live Arcade games, in part because of the soul-crushing challenge it presents, and this follow-up is adding multiplayer (among other things) to keep the experience fresh.

So, multiplayer in Trials — how does that even work? I tried out a few rounds of the local multiplayer, which supports up to four people. Basically, you’re riding across similar tracks, but there is a separate lane for every participant. You get do your thing while others do theirs at the exact same time and someone comes out a winner.

That said, if you fall too far behind the other racers — or crash, which is a fairly likely occurrence — you’ll be docked points. While this series has always been difficult, I would never call it cheap. As such, when you mess up even in multiplayer, you get a quick respawn. 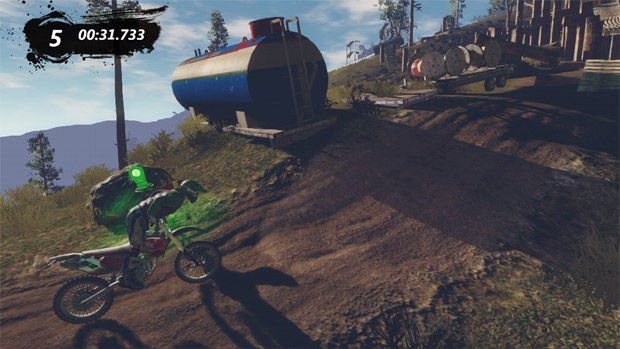 I can’t speak about online multiplayer for Trials Evolution, but since you are sharing a screen with friends (soon to be enemies) in local play, I could see this putting a limit on the types of levels that would mesh well with multiple lanes. In single-player, levels can focus more on platforming and on elaborate, often vertical stage designs.

Not that I think this will be a problem. I mean, it makes sense. From what I played at PAX, the levels were fairly straightforward — probably catered more to the convention audience — but I’m sure there’s a wide difficulty range. Speaking of which, they were outdoor levels, which is new to Evolution. It’s nice to see more visual variety.

This game seems like a logical extension and one that fans will adore. Even though my hands-on time was very brief, everything felt right. While single-player Trials is always entertaining, even if you’re only watching someone else play, local multiplayer will give the series an even better presence at gaming get-togethers.