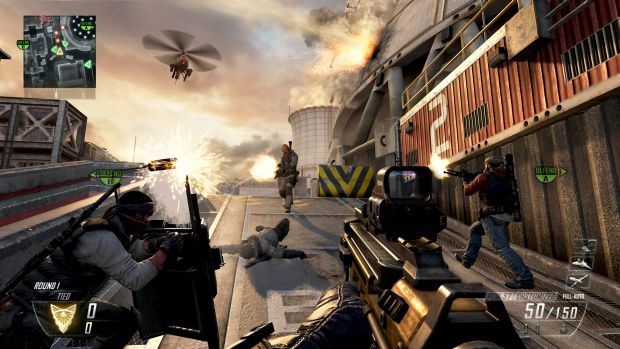 Expanding beyond just the pro players

The Call of Duty series has a mass hardcore following, and experienced players know what to do the second they pop in the game disc. But there’s still a percentage of players that have never really touched the multiplayer, largely due to fear of just getting rolled on no matter how hard they try. First-person shooters don’t need to be a purely hardcore experience, and that’s a sentiment that design director David Vonderhaar shares.

With Black Ops II, there are now more tools than ever to help players learn the ropes instead of just going in blind. Combat training has been greatly expanded on, as it’s part of the core progression system in multiplayer, and it also includes bots to give players a fighting chance. Then there’s the livestreaming features which allow you to learn new tactics by watching the pros do it. Call of Duty Elite is again providing a ton of tips for every aspect of the game, and all of its features are free this time around.

“It’s our responsibility as the developer of the game to put out what’s out there so that people can have the experience,” David told me. “You can’t be the big online game if you don’t do this thing. I think it’s all about aspirational play. Watching other players, learning, and saying ‘Okay, I see what he’s doing and I can learn from that so I can get better myself.’

“We’re doing a pretty good job creating a game for really good slayers. It’s the guys who are getting crushed that need our help. We have all that stuff through all the skill bands, and it’s hard to get right but we’re going to keep chasing that.”

These tools can only take a player so far, though. Eventually they’ll hit a peak, “but you at least have to give them an opportunity to enjoy the game,” says David.

This is where League Play comes into the equation. It’s a skill-based matchmaking system that gives you a skill rating based on your performance, and from there places you in a division with players at similar skill levels. The better you do, the higher you’ll rank and move up in ladders, but if you find yourself plateauing you’ll at least be setup against a constant stream of similar matched players.

It’s not just completely new players David is trying to reach out to. There’s an older generation of players that still want to play, but may not necessarily be able to keep up with Activision’s targeted demographic.

“This is maybe slightly personal, and kind of embarrassing, but, you know I’m coming up on 40,” David explained. “When I was the age of the young men who are 22 playing this game, I was the slayer. I was the guy with the good Internet connection putting people down with my railgun in Quake 2 and my rocket launcher in Quake 1. I consider myself a hardcore gamer, but I can’t compete against a guy 20 years younger than me with his reflexes. He’s younger, has better reflexes and better eyesight (laughs).

“I was very lucky to be 20 years old when the first online shooters became available, I’ve grown up with this and it’s defined a big part of my life. So there’s gotta be other dudes who are 35 that are getting their asses kicked by 22-year-olds who still want to enjoy their shooters the way I do. I don’t want to quit playing shooters just because I’m 40.

“The passion for me is making sure that there’s environments [such as League Play], because I know there’s a lot of 22-year-old guys playing every day, but I know it’s not the only people playing the game. There’s a big group of people who are gamers and a big group of people play first-person shooters. I don’t want it to be just for 22-year-olds. That would be kind of sad for me as a guy who used to be 22 playing shooters. I want everyone to enjoy the game. I want that 22-year-old guy to enjoy the game, that perfect [demographic] that people talk about. But I also want guys who played Quake with me when I was 22 to enjoy this one too.”