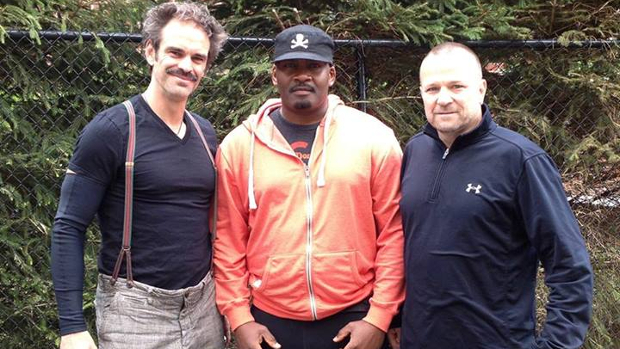 GQ got to sit down with the three main stars of Grand Theft Auto V: Shawn Fonteno (Franklin), Ned Luke (Michael), and Steven Ogg (Trevor) where they talked about their roles in Grand Theft Auto V. First I have to highlight this comment from Steven Ogg.

“I want to take “voice acting” and send it up to space,” Steven told GQ. “This was a motion capture performance. This was not me sitting in my underwear in a booth watching some character that was like Trevor and saying my lines. No. That was me up there in my motion capture suit with the camera directly in my face and the light in my eyes. It’s a huge thing. It’s not just voice acting. You put three years of your life into something like this and you certainly, if nothing else, want the recognition of what you’ve done.”

I never realized it until I read this but he’s totally right. When it comes to games like this, you simply can’t refer to these people as just voice actors anymore. Not to mention dedicating three years of your life to this.

The other thing from the interview I wanted to highlight was Steven’s answer to how hard or easy it was to play a character as insane as Trevor.

“It’s certainly fun because you just get to be nuts. The thing about Trevor, this character that I so love to play, is that he kind of represents the gaming world and this idea of pure escapism. He gets to be that guy who gets to say whatever he wants, to do whatever he wants, to fuck whatever he wants. Everyone has that fantasy, right? Trevor just does it. It’s very liberating.”

I’m being a little Trevor bias here, but I can’t help it as he was my favorite character in the game. In fact, he’s probably my favorite new character of the year, and it’s all thanks to the performance Steven gave.