Part of what draws me to Famicom games is the fact that I missed out entirely on the culture around it. Not only am I of an age that would have given the Super Famicom more significance, but — and this may shock you — I’m not Japanese.

One of my biggest windows into the Famicom culture is Game Center CX, a Japanese show that involves a guy, Shinya Arino, in an office playing video games for hours at a time in an attempt to beat them. There are segments that celebrate the games of yore and explore the many arcades that still exist scattered across the country, and bit by bit, you’re given insight into the Japanese perspective.

Among the things I’ve learned is that there was a period in the mid-‘80s where players seemed to be obsessed with “secrets.” This would sometimes merely be the presence of a warp zone, a concept that was grasped by Western audiences as well. Other times it would be a cameo appearance by characters from another game. But developers would occasionally go overboard. The most high-profile example of this in the West is probably Milon’s Secret Castle or Super Pitfall, impenetrable games that are almost impossible to topple without some sort of guide. We’d also be spared from the true Super Mario Bros. 2, which equally enjoyed screwing with the player unless they knew what they were doing.

Dig deep enough, and you’ll find quite a few examples of this, but one of my favorites is the absolutely stupid Atlantis no Nazo. 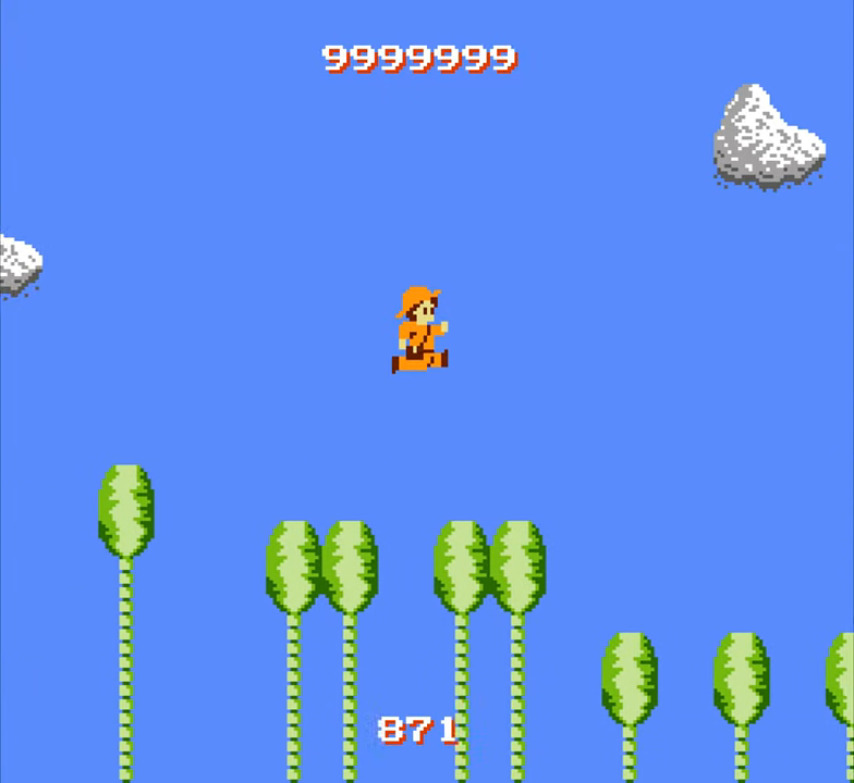 Super Mario Bros. was released a few months previous to Atlantis no Nazo (Mystery of Atlantis) to great success. It was a transformative game that captivated audiences. By the time Atlantis no Nazo was released, Nintendo’s new whiz kid had sold 3 million copies in Japan alone. It’s no surprise that publishers wanted in on that frenzy, and Sunsoft was no exception.

However, no one really understood the special sauce that made Super Mario Bros. so successful. Most of the time, the strategy to beat it was to throw out a platformer crammed with warp zones, power-ups, and levels, and hope gamers would like it better. Atlantis no Nazo was advertised with the tagline “Ano Super Mario wo koeta,” or “That one that exceeded (or surpassed) Super Mario.” Certainly high ambitions, but you’d have to be insane to push that comparison on yourself. 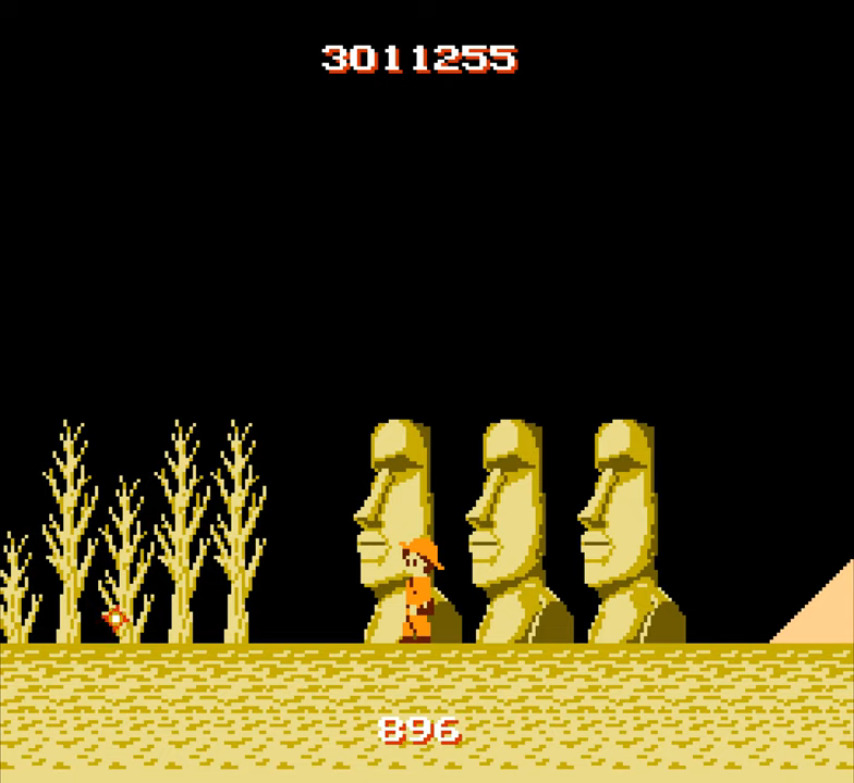 I’d say the Mario Bros. comparison is actually a disservice to Atlantis no Nazo because it ignores what makes the game special. While Super Mario Bros. was a linear progression (unless you took warp zones), Atlantis no Nazo has you jump all over the place between its 100 levels. Most areas included multiple exits, screens scrolled both left and right, and it was up to you to find a route to level 100. Not easy considering how bizarrely cryptic the game is.

To prepare myself, I re-watched Game Center CX’s episode on the game to see the route Arino took. Although he deviated to a path that allowed him to pick up an invincibility power-up, it’s possible to get through the game rather quickly by using a few obscure warps, two of which require you to kill yourself at just the right spot on the screen to get transported further.

Those aren’t just outside examples of bizarre continuation points. During Arino’s run-through, he accidentally fell down a seemingly bottomless pit and was transported to another level. There are also warps that take you back to previous zones, but that doesn’t mean you’ve lost progress, it’s just that the game jumps all over the place. It’s non-linearity in the most arbitrary way possible. 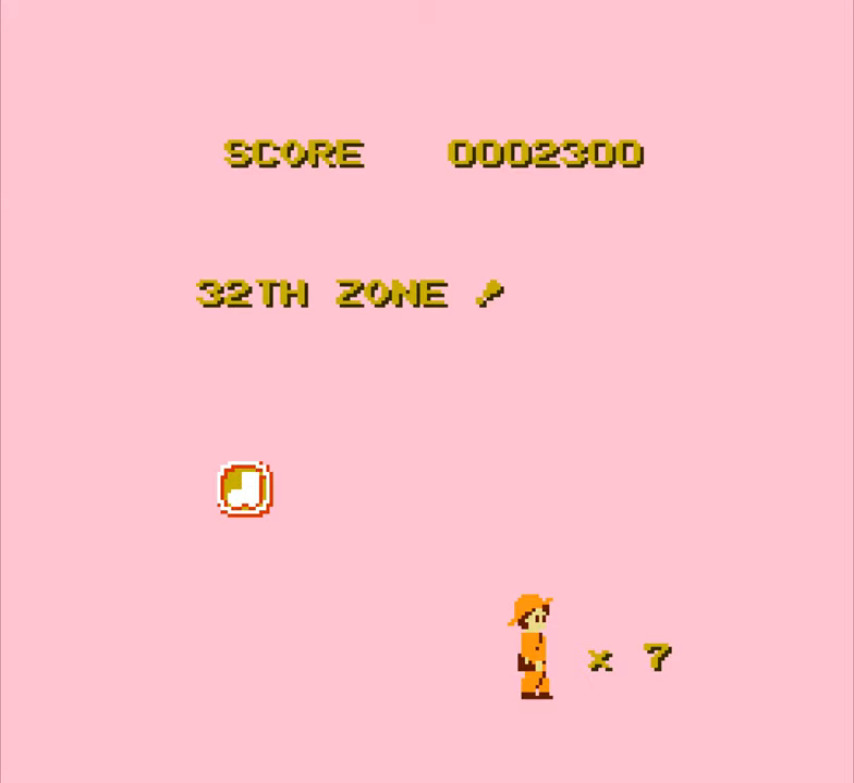 The sequence of warps isn’t even the most unfriendly part of this game. The controls are a bit ridiculous, especially when it comes to jumping, and the structure of the platforming stages can seem a little unfair. You also die in a single hit, and your only weapon is unreliable at best. Many of the jumps are set up so you require ludicrously good timing or simply unreasonably precision with your button presses.

There’s also a zone in the game that just has the words “Black Hole” written in the background and drops you to your death repeatedly with no escape. So that’s fun. Three of the levels are reportedly not even connected to other zones, meaning you can only get to them with a level skip cheat. A few are just small rooms that contain a single door. You’re not truly getting 100 challenges, just 100 zones, if we’re being charitable.

To be fair, it was 1986, and platformers were still learning how to not suck. Most from that year probably did suck. It’s not as bad as, say, Milon’s Secret Castle or Koneko Monogatari, but it’s definitely a sinner. 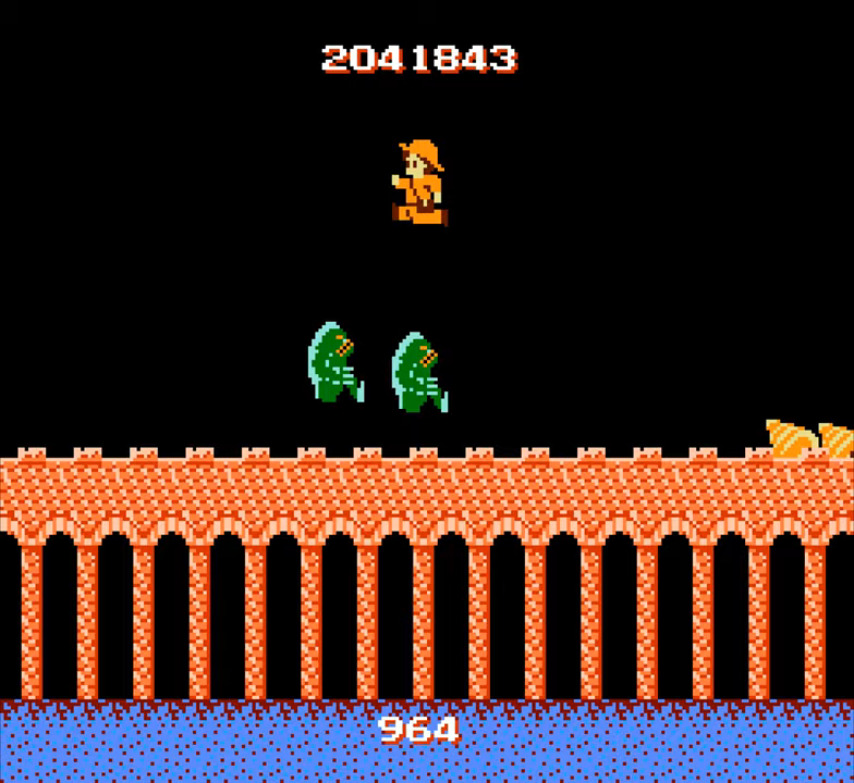 I understand a lot of complaints and even praise I have towards Atlantis no Nazo makes it sound like the formula for an awful game, and maybe it is. However, like Spelunker, I have a special soft spot for it. I think I just find it charming due to how much of a jerk it is, like watching an energetic dog push a child into the mud. It’s just so cheerful about it that you can’t hate it!

We nearly got Atlantis no Nazo over here in the West, as Activision attempted to rebrand it as Super Pitfall 2, which is funny because the game obviously has no connection to that series aside from being extraordinarily obtuse. I’m not exactly sure why we never got a port, aside from the fact that the NES was still in its infancy in 1986, but I’m straining to think of a single case of the Japanese language being present aside from the title screen. That means if you’re unfamiliar with the language, you can still conquer its 100(ish) levels.

It was re-released in a couple Sunsoft compilations on PS1 and Windows. More recently, it was chosen as one of the 30 games on the Famicom Classic Mini console that Japan got. It’s also available on Japan’s Nintendo Switch Online, so I wouldn’t be surprised if it turned up over here. Maybe. It’s definitely a game that’s made for Japanese tastes, so I’m not exactly holding my breath.