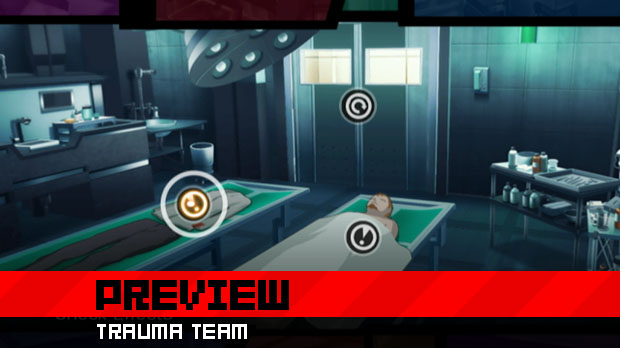 …and that’s a good thing. Up until now, Atlus’ Trauma Center games have been mostly about hacking up bodies in surgery. Not that I have a problem with that, mind you. It’s just that there’s a lot more to the upcoming Wii game Trauma Team, as it now features game play from six different medical fields, including forensics. Of course, in the field of  forensics, you’re working to figure out how the patient died. This has never been done before in a Trauma series game until now.

Atlus gave us a first look at how the forensics side of Trauma Team works yesterday. I can say that fans of point-and-click adventures as well as the new-school crime mystery games like Phoenix Wright and Hotel Dusk are really going to dig this forensics game play.

In the forensics mode of the game you’ll play as Naomi Kimishima. Series fans may remember her from Second Opinion. In our presentation, Atlus alluded to some of her back story, which points to a disease that she has which prevents her from working in the surgery room. From the story elements I saw, she looked really down and mopey. “Emo” is probably the best word to describe her. Dark clothing and everything. Cheer up, Busty Emo Kid.

Naomi visits crime scenes that unfold in a animated storybook style. Less talking heads and more to look at, which is nice. You’ll navigate and explore using the Wii Remote and Nunchuck. Just like in your favorite medical/crime television show, she’ll work to find a cause of death by going over evidence, checking out locales, interviewing witnesses and examining bodies in the lab.

In the scenario I saw, Naomi talks with cops at the scene of what looks to be a suicide. A wrist was cut, things were knocked over, and a small fire was started. Anyone that has ever played this type of game knows better; this was not a suicide. Naomi thinks it looks more like a murder.

Back at the office, Naomi has access to tools to help her solve the case. She has a computer that displays all of her research and evidence, represented by “evidence cards.” On this computer, cards can be examined and even combined. The eventual goal is to use all of the cards to combine all the elements of the case to find solid leads and eventually recount the death exactly. You’ll have help from an assistant named Little Guy. No, really. For some reason, Little Guy looks like a Mii. You can’t change his look, either. This Mii-faced guy will analyze evidence for you and help you go over the case. Pick up an evidence card and drag it toward Little Guy, and he’ll get to work. He may look silly, but he knows his stuff.

In your work you’ll also be able to hit the morgue to examine the body. The Nunchuck and Wii Remote let you rotate the body in 3D. In this case we found that aside from the suicide-linked wrist injury, the body also had a strange bruise on the rib cage.

Naomi has a voice recorder that she can use to play back interviews with witnesses. She’s able to go over each bit of dialogue and analyze it, breaking out clues to even more evidence cards. It turns out that the friendly elderly neighbor saw someone else coming into the victim’s apartment. Hmmm. Later on, tools like the multi-light source device named ALS can be used to find hidden fluids and materials at the crime scene. Your finds will also become evidence cards back at the office on your computer. You’ll sort through these trying to find solid evidence. I won’t spoil it for you, but there was blood on the ceiling fan and on the door.

Kind of like in Phoenix Wright, Naomi will examine evidence and have to make decisions on what she is seeing. Multiple choice fields let you use your powers of deduction and instinct, but know that a meter with five hearts floats above. Make a mistake and you’ll lose one. If you lose all, you’ll start all over.

The forensics side of Trauma Team is like a game in itself. It’s like its own point-and-click game. If you dig the crime mystery games out there, you’ll likely eat this up. The case I saw took over an hour to solve, and that was speeding through it. Atlus says that there are six of these cases, each being an hour or longer. What’s more is that they tie into the rest of the game, meaning that the other medical disciplines play into things. Very interesting. We’ll look forward to seeing how it all comes together this April, when Trauma Team is released on the Wii.