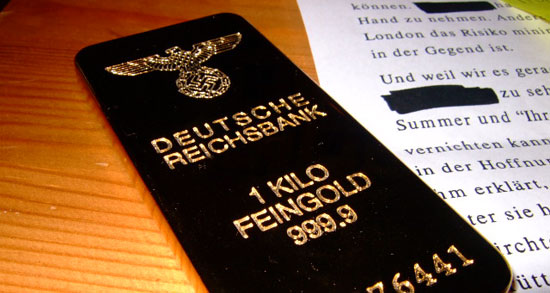 The United States Postal Service delivered a mysterious package to my door today, return address Forest Hill, London (with postage on the package stating it was sent from New York City). Concerned for my safety (everyone’s a terrorist these days), I carefully opened the package to find the following:

A one-kilo brick of Nazi gold (heavy, but a replica), two stickers, and a letter in German.

Putting two and two together, this is obviously some sort of tie in with Replay Studios’ stealth action title, Velvet Assassin. Last month, the devs accidentally slipped some info to me about a real life tie-in where gamers could find bars of Nazi gold outside of the game. Perhaps this is only the beginning?

Unfortunately, I don’t read or speak a lick of German, so we need your help. In the gallery is a scan of the letter, which may offer some mores clues as to a) where we can find more Nazi gold or b) whether or not Ashley Simpson is or is not actually pregnant with that dude from Fall Out Boy’s child. Some parts of the letter have been redacted, making this even more mysterious than the usual packages of gold bars we receive, so we appreciate your help in this matter.

Don’t let us down, Destructoid community — we’re counting on you to come through!

[Update: Thanks to everyone who translated the article. It looks like a related ARG blog for Velvet Assassin has cropped up, and already has a few entries. It’ll be interesting to see where this is going. Wherever it is headed, I’m glad it involves me getting gold in the mail.]