Parts I and II of this series have touched on various elements of Transistor‘s design, but not one of its most striking facets, the artistry that immediately arrested many of us when Transistor was announced. We also sat down with Jen Zee at Supergiant, the artist behind this indelible style, and talked a bit about artistic influences, design process, refusing cyberpunk, and briefcases.

“We came off Bastion and Bastion is such a bright and colorful world that we kind of wanted to try something different. It was reactionary,” Zee explained. “We did a fantasy world already, what can Supergiant do in the sci-fi world? What would that look like? We attempted to go for a more pallet-controlled world that would just feel a little more dark than Bastion.

“The difference between Bastion and Transistor for me, the big difference, is that I wasn’t on board at the very start of Bastion — pre-production. But I definitely got to scratch an itch where I kind of wanted to in a sense write a love letter to classical artists that I grew up really liking, like William Waterhouse or [Gustav] Klimt, or Alphonse Mucha. I wanted to inject that somehow into the art we made for Transistor because there’s no other opportunity like the one that’s right in front of you to express yourself the best you can. So I think that it’s a combination of reactionary to Bastion, things that we wanted to do on Bastion that we never got to do, and also things that I wanted to do my whole life.” 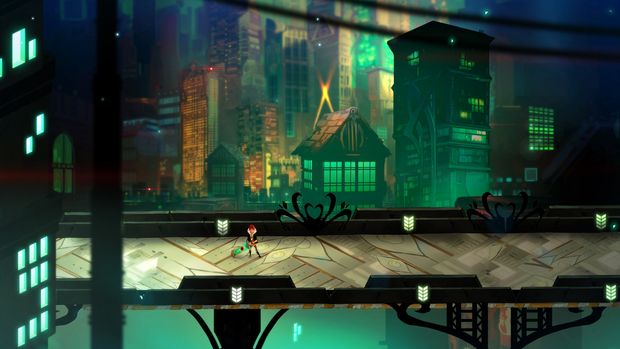 Art majors in the audience may be excitedly raising your hands if you see the art history thread sewn between those influences that shine through in Transistor a lot more than the idea for a cyberpunk aesthetic that acted as an initial starting point. “We brought in the cyberpunk and then we decided that we didn’t want any of it,” Zee said. “We rejected all the cyberpunk things. We were like, ‘no trench coats, no rain.'”

“A lot of cyberpunk stuff actually does tip its hat to Art Deco movements. Blade Runner definitely has that. I love Art Nouveau personally and I know a lot of other artists do too so I’m surprised it doesn’t show up in a lot more videogames. So I thought I’d take the opportunity to integrate it into the cyberpunk and make something that feels a little different, not so dreary and dystopian as other things that may be considered in the same genre.”

While Transistor‘s lead, Red, quickly became iconic, the tone of the game came first. “We’re pretty sloppy with our pre-production,” Zee said. “I love characters, but I think the thing that felt most natural was to just start with mood paintings, which were just really quick color sketches of something that’s trying to capture the atmosphere of what we want the game to feel like, or what I think fits into the game we’ve already created.

“I think the issue with starting with a character is that it’s too specific when everyone else is also looking at the game very abstractly and when you get too specific and do things like characters or even a specific asset for the game, it can start feeling like, ‘oh here’s the box that I put you all in now’ and it just doesn’t foster creativity, I think.”

Red did materialize, but not without some struggle. “There’s a much longer story there and I don’t think we’re actually going to get into because it’s one of those things,” Transistor‘s writer, Greg Kasavin, trailed off.  “But I mean, the shorter version is after iterating on character stuff for a while, there was this specific image that [Zee] made of [Red] that people on the team saw and were like, ‘that’s awesome, let’s do that,’ and it still evolved, like the look of the Transistor evolved…”

“But she didn’t evolve a lot,” Zee noted. 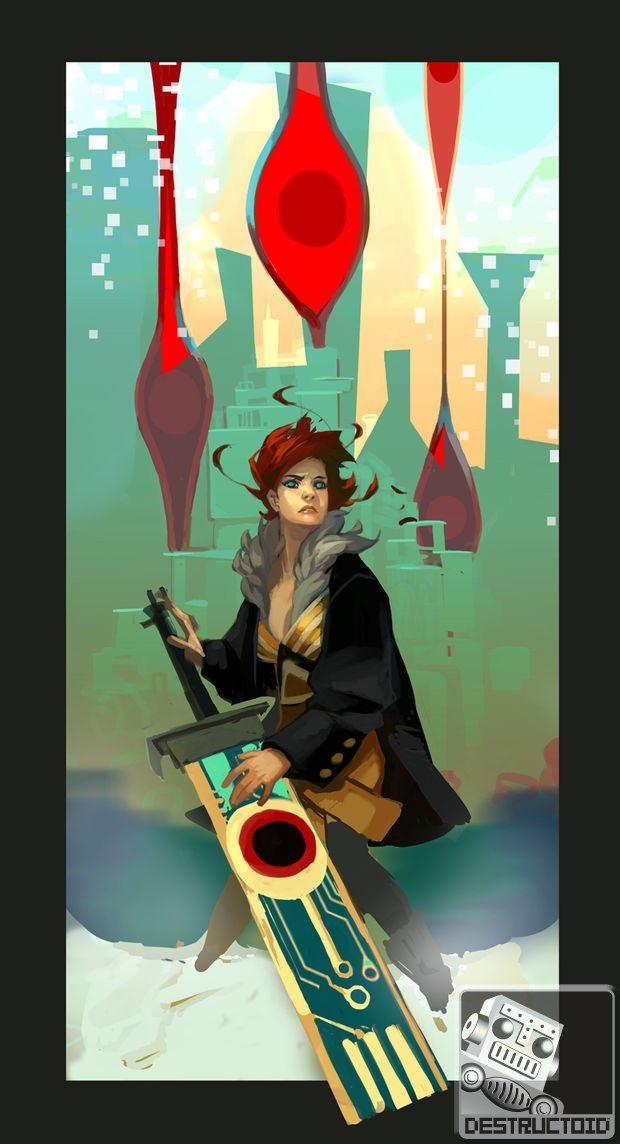 Early concept image for Red and the Transistor

“We struggled for a long period,” Zee said. “There was nothing the whole theme was glomming onto, including myself. Then we made a decision and some new art was made and within the span of a day or two we found her and she was born and kept forever.”

“It combined a bunch of older ideas that had been kicking around for a while,” Kasavin said. “You’ve heard us kind of alluding to how we circle in on things and sometimes we go back out and sometimes we come back around to ideas that we realized had stuck with us. When an idea can survive around here for a long period of time, we start to gain confidence in it as something that, at the very least, we like.”

“It’s one of those things where it’s not quite there, nothing’s working, you scrap it all, and the thing you make next really quickly is just the right thing,” Zee said. We hadn’t seen that concept image yet, so we asked if the Transistor’s design came about in a similar manner.

“She was designed with the sword,” Zee explained.

“It was basically linked — sorry, not to speak for you — to the story,” Kasavin said. “A big part of it was making a high-level decision on what the story was going to be about. Centrally, not moment by moment. … It was an idea real early on, this story about a character whose voice has been taken from her partnered with a character who had been reduced to only a voice. … None of us knew how Jen was going to spin it. … There was an understanding at that point that she would not be speaking and that the sword would be. That was part of the idea behind those characters.”

As for alternatives to the sword? “I think without context it just wouldn’t make sense,” Kasavin laughed. A pause.

“We could say at one point it was going to be a briefcase,” Zee said.

“We liked the idea,” Kasavin explained. “It’s a pairing of characters. Those characters took different forms.”

Am I the only one who wants to see briefcase concept art, if there even is any? We’ve still got a music-focused discussion with Darren Korb and more on the way. Stay tuned.